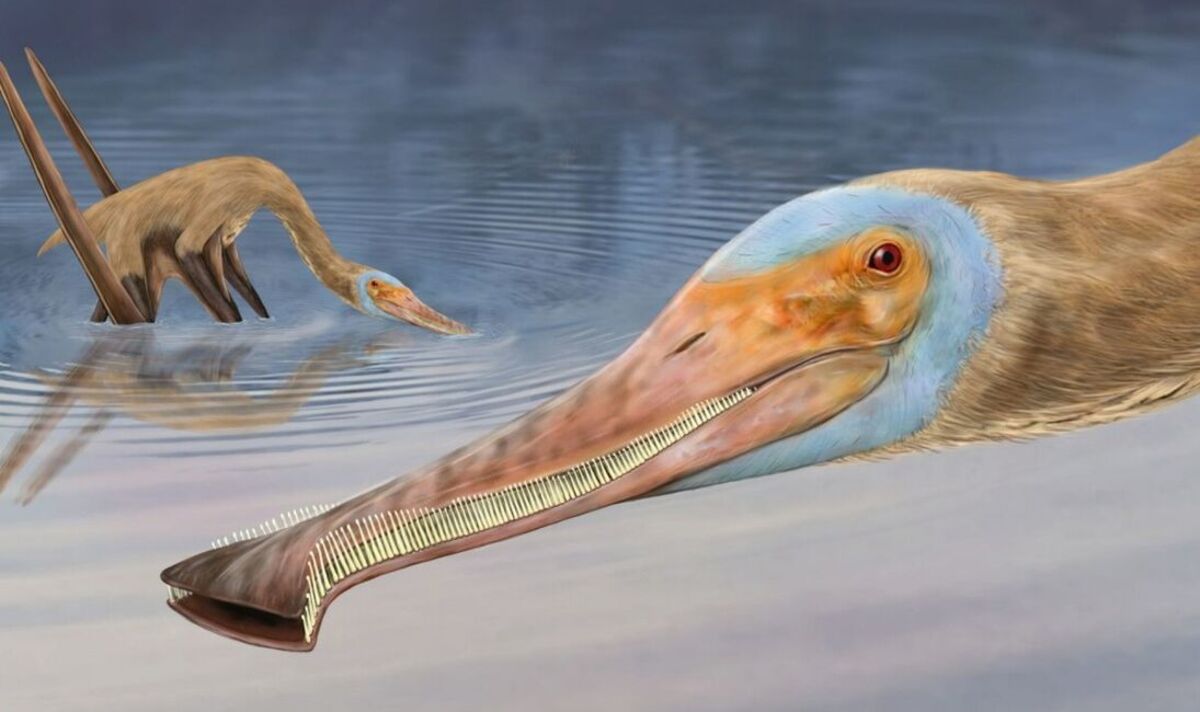 Researchers have accidentally stumbled upon the remains of a new species of dinosaur which had 400 teeth tightly compacted in its mouth. The creature, which belongs to the pterosaur family, used its long jaws to eat in a similar way as ducks and flamingoes do today. The remains of the nearly complete Balaenognathus maeuseri were found in a German quarry after scientists came across it while excavating a large block of limestone containing crocodile bones. The Bavarian region has been home to the fossils of hundreds of pterosaurs, or flying reptiles, ever since the first of its family were found in the 18th century.

Since then, the quarries of the Franconian Jura have become one of the richest pterosaur localities in the world. Balaenognathus maeuseri, while a newly discovered species, belongs to the same family of flying reptiles.

This research was led by Professor David Martill of the University of Portsmouth, Hampshire, and involved palaeontologists from England, Germany and Mexico.

Prof Martill said: “The nearly complete skeleton was found in a very finely layered limestone that preserves fossils beautifully. The jaws of this pterosaur are really long and lined with small fine, hooked teeth, with tiny spaces between them like a nit comb.

“The long jaw is curved upwards like an avocet and at the end it flares out like a spoonbill. There are no teeth at the end of its mouth, but there are teeth all the way along both jaws right to the back of its smile.

The teeth of the new pterosaur suggest an extraordinary feeding mechanism while it waded through water. It would use its spoon-shaped beak to funnel the water and then its teeth to squeeze out excess liquid, leaving prey trapped in its mouth.

Prof Martil continued: “And what’s even more remarkable is some of the teeth have a hook on the end, which we’ve never seen before in a pterosaur ever. These small hooks would have been used to catch the tiny shrimp the pterosaur likely fed on – making sure they went down its throat and weren’t squeezed between the teeth.

“This was a rather serendipitous find of a well-preserved skeleton with near perfect articulation, which suggests the carcass must have been at a very early stage of decay with all joints, including their ligaments, still viable. It must have been buried in sediment almost as soon as it had died.”

The pterosaur belongs to a family of pterosaurs called Ctenochasmatidae, which are known from the limestone in Bavaria, Germany, where this one was also found.

Prof Martill added: “This pterosaur had teeth in the upper and lower jaw, which are a mirror image of each other. There is one other pterosaur with more teeth – Pterodaustro from Argentina”.

However, he clarified that the Pterodaustro had stubby teeth in its upper jaw and even longer teeth in its lower jaw, suggesting that this new specimen is very different from other ctenochasmatids.

Researchers believe that the animal likely dabbled as it waded through shallow lagoons, sucking in tiny water shrimps and copepods and then filtering them out through its teeth just like ducks and flamingos.

The generic name ‘Balaenognathus’ roughly translated means whale mouth due to of its filtering feeding style. Whereas the specific name was derived one of the co-authors Matthias Mäuser who sadly passed away during the writing of the paper.

Professor Martill said: “Matthias was a friendly and warm-hearted colleague of a kind that can be scarcely found. In order to preserve his memory, we named the pterosaur in his honour.”

The paper A new pterodactyloid pterosaur with a unique filter-feeding apparatus from the Late Jurassic of Germany is published in Paläontologische Zeitschrift (PalZ). The specimen is currently on display in the Bamberg Natural History Museum.