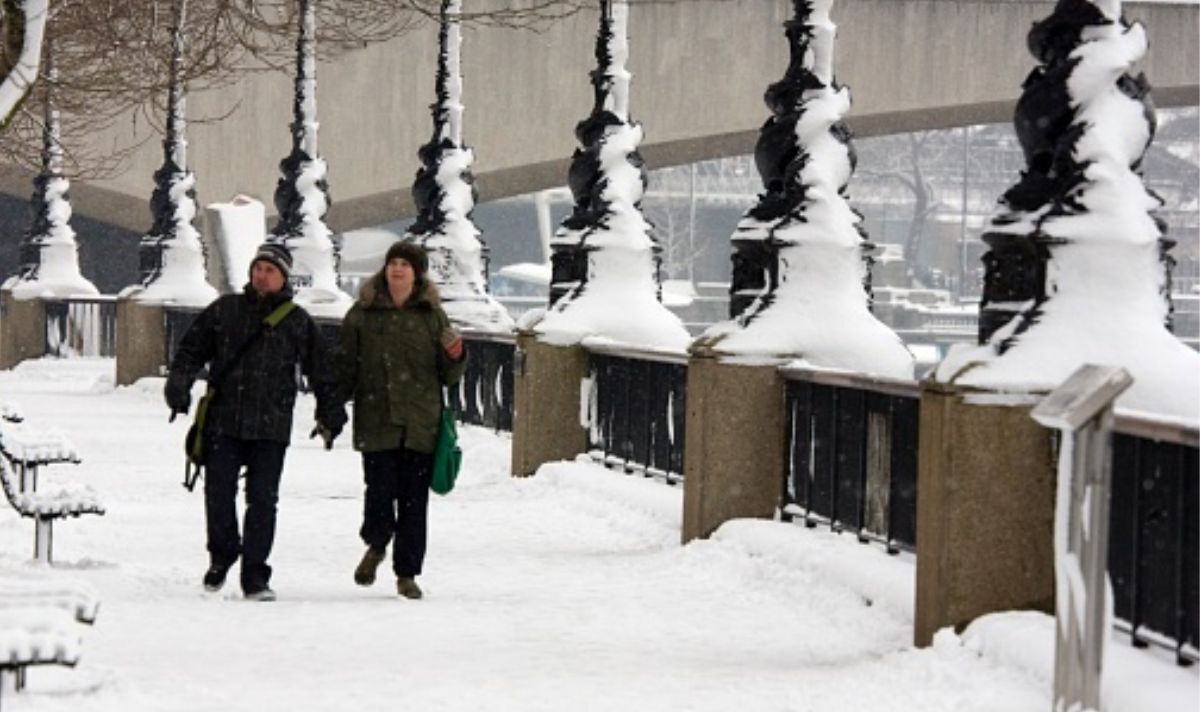 The Met Office predicts February – which is just around the corner – will begin with unsettled conditions of wind and rain. But, other independent forecasters remain sceptical over whether the UK will see any more snow. The first week of the new month is under the most scrutiny – as the mercury is expected to tumble from the second day. Interactive weather model WXCHARTS also show the potential for wintry showers to break out – cementing the belief that the brunt of winter is far from over.

Jim Dale, senior meteorologist at British Weather Services, told Express.co.uk how the cold period would begin unfolding just hours into February and that it had potential to last up to a week.

Weather maps also showed snow reaching nearly every one of the four nations – with Scotland carpeted under masses, and places like Manchester suffering the consequences with up to 11cms laying.

But, a change to the frontal system is beginning to retract – and that means while snow is still expected – it may not be so widespread as initially anticipated by experts. This change does not diminish the introduction of another cold snap, however, with maps showing the entire eastern coastline of Britain being battered by freezing winds.

Mr Dale said: “It’s one massive retracement, the colder air is being shoved north. It is an obvious somersault but will have to wait another 24 hours or so before it can be called.” He did confirm that possibilities of snow falling were indeed not entirely out of the running as yet.

The same sentiment is echoed by NetWeather’s long-range forecast from January 30 to February 5. It says some snow is to be expected – but mostly in Scotland and it will not just be confined to higher ground.

It says: “North-westerly winds will dominate early in the week with high pressure close to the south-west of Britain and low pressure over Scandinavia. Some rain belts will move from north-west to south-east through the country, heavy and persistent in western Scotland, but tending to turn light and patchy as they move south and east through the rest of the UK.

“In between, it will be brighter with some showers, most of the showers in north-western Britain. The showers may be wintry at times in Scotland, especially but not exclusively on high ground.

“For central and southern parts of England and Wales, though, the early part of the week will be mostly dry. Temperatures will mostly be around average for the time of year.”

On February 2, maps show lows of -2C in Scotland, 0C in Newcastle and highs of 4C in the south, across Kent and Essex as midnight approaches. During this time a plume of snow is illustrated as falling over all of the northern part of the country, including areas in Northern Ireland.

The most southerly part it appears to reach is Manchester, although, according to its snow depth chart places such as Liverpool could get a dusting – with  Inverness in Scotland being inundated with around 14cm.

The south east unsurprisingly remains unscathed, and parts of Wales and the Midlands that remain above freezing look to experience a bit of overnight rain instead. The next brief snow shower could come pushing eastwards across Britain on February 6 at about 6pm.

This time it could hit much of Wales, Dublin, Newcastle and Manchester getting up to 2cm at most. Maps currently only go up to midnight on February 9 – but initial illustrations show rain and potentially more snow could be pushing eastwards.

The Met Office’s long range forecast for this period almost eliminates any snow predictions – but warns of some possible overnight frosts on clear nights.

In its forecast from January 29 to February 7, updated daily, it says: “On Sunday, cloud across the northwest could bring periods of rain and drizzle, especially for western Scotland.

“Elsewhere, central and eastern parts could see some brighter spells, particularly in the lee of higher ground. Temperatures mild in the north, but around average in the south. Into next week, frontal systems approaching from the northwest could bring some periods of heavier rainfall or showers, this weakening as the fronts move southwards.

“Parts of the south could remain largely dry, while the north may see more spells of wet and windy weather further in the period. Strong winds in the north with possible gales, but generally light or moderate winds in the south. Temperatures generally around average, perhaps slightly above average for a time. Overnight frosts remain possible under clear skies.”