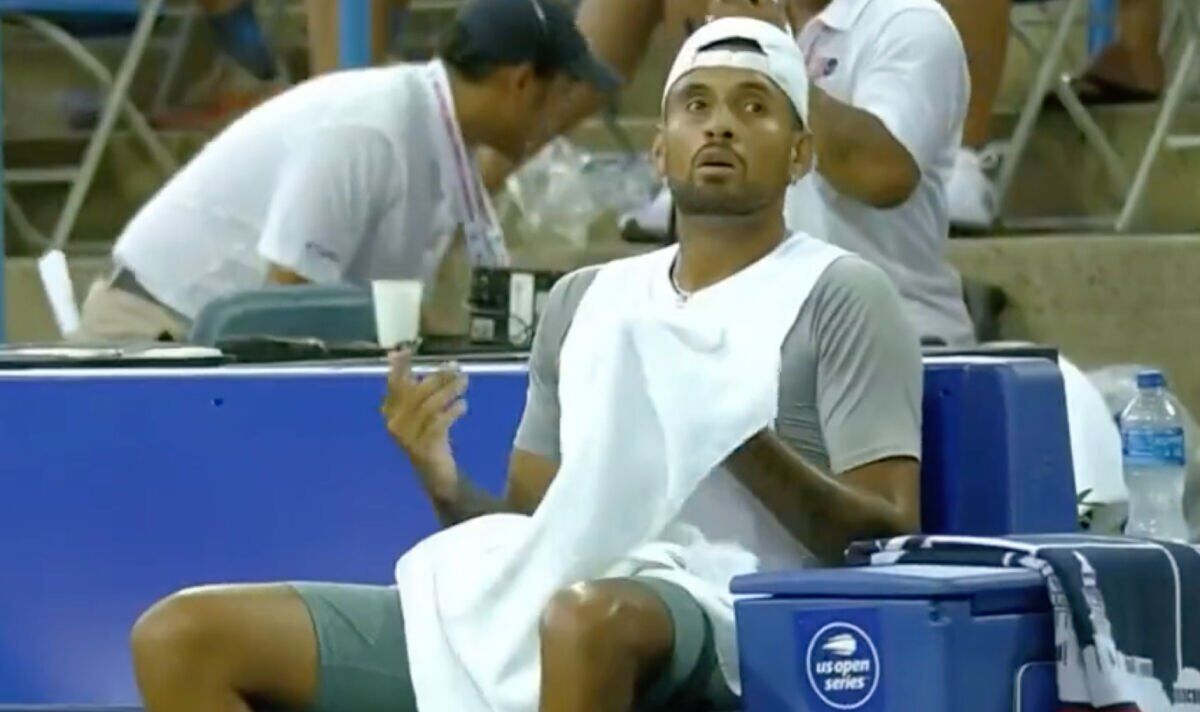 Nick Kyrgios was not happy as his Citi Open third-round match was suspended just seven minutes into the first set due to rain and lightning on Thursday. At 1-1 in the opening set, Kyrgios and Opelka were both forced off the court with play paused due to bad weather in Washington DC.

After chair umpire Renaud Lichtenstein said “ladies and gentlemen, play is suspended”, Kyrgios made his way to bench and could be seen shrugging his shoulders and saying “Why?” Kyrgios was then shown in conversation with match officials about the decision.

The Citi Open posted to fans on Twitter: “Weather Alert: There is currently lightning in the area. For your safety please seek shelter immediately in one of the covered locations on the grounds. For updates on the status of play, stay tuned on #CitiOpen social channels & @TennisONEApp with push notifications.

“As you wait for rain to pass, enjoy the best of DC eats and beverages around the grounds while staying dry & having fun! Grab some of our amazing food options in the City Ridge Market Square Share drinks at Rock Creek Grill and Beer Garden or the cosy The Chandon Garden Lounge.”

Amazon Prime Video’s lead commentator Kevin Skinner noted: “There has been a stoppage of play because of the threat of rain. There’s a compulsory stoppage of play if there’s lightning within seven miles.

“Reilly Opelka wasting no time heading back to the locker room. Kyrgios happy to sit and wait for a moment. We have no idea as of yet as to where the storm is moving or if it’s just going to hover. It’s offering enough in precipitation that they have halted the action.”

The broadcaster’s co-commentator Lucie Ahl added: “It happens. Certainly in the States. I experienced it a few times. It can be a bit confusing because it’s happened with blue skies. They get you straight off. I think that was just being explained to Kyrgios.”

Even before the stoppage, Kyrgios had been raising his frustrations to his players’ box. Opelka dropped three aces as he defended his serve in the opening game before the Australian held serve himself.

Kyrgios has never beaten the big-serving American and the Wimbledon runner-up is 0-2 against him having last met in Houston on the clay earlier in 2022. Opelka is the fourth seed at the Citi Open. World No 63 Kyrgios made the headlines for his second-round win over Fritz’s fellow American Tommy Paul.

In one incident after receiving a code violation for ball abuse, he asked the umpire: “What about a code violation for the bad idea by you to slow the game down?” He also accidentally hit a fan with a return but offered one of his towels in apology. The fan was spotted saying: “What’s this for?”