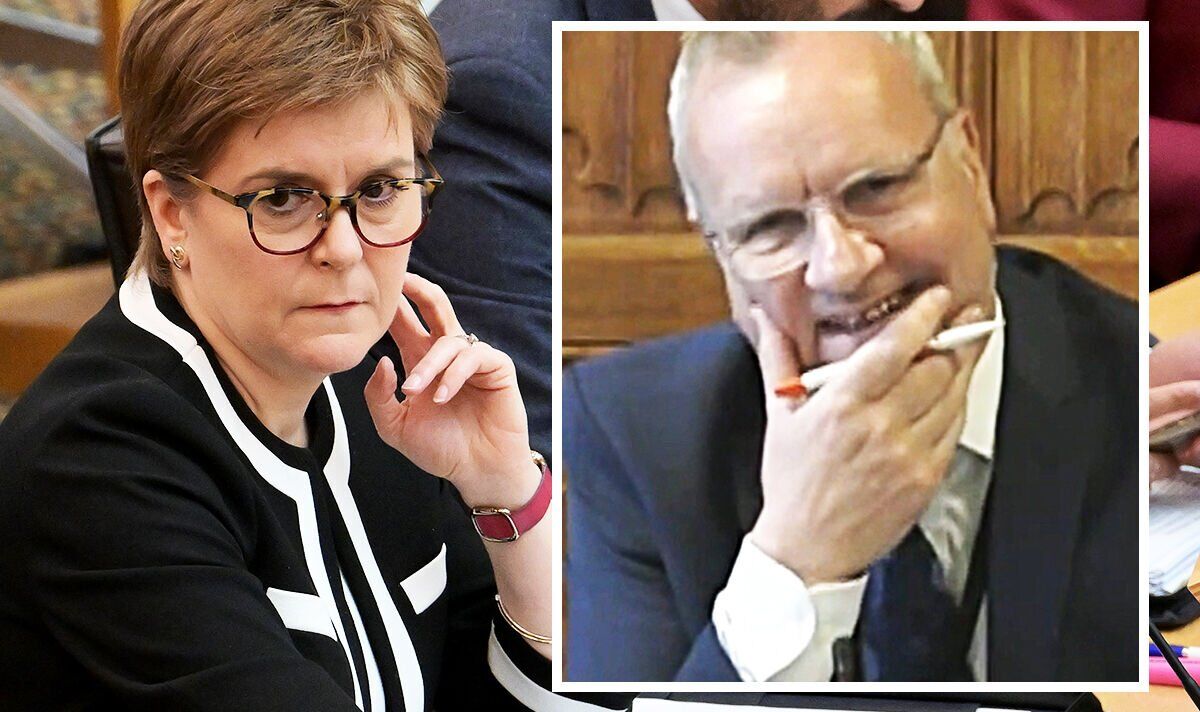 Pete Wishart, chairman of the Scottish affairs select committee, laughed with the Conservative Scotland Secretary Alistair Jack after the SNP leader “snubbed” an appearance before MPs. The select committee had written to Ms Sturgeon’s office last November asking if she would give evidence to the parliamentary group, only to have their request denied.

Ms Sturgeon left her own MPs dismayed when she said she was under no obligation to attend.

“As the committee is aware, I am accountable to the Scottish Parliament for the decisions and actions of the Scottish Government,” she added.

Joking this afternoon about Ms Sturgeon’s non-appearance, Mr Jack told the SNP committee chair not to take the “snub” personally.

He said: “I thought I might put on record my disappointment that I know we both share, Mr Chairman, in Nicola Sturgeon’s recent decision not to appear before the committee.

“I do think it’s a great pity because I think ministers from Holyrood and Westminster should endeavour where possible to appear before committees.

“I am pleased to say no fewer than five UK Government ministers have appeared in front of Holyrood committees in the last 12 months.

“Now, I don’t think the First Minister’s decision was a snub to you personally Mr Chairman.”

He said that Mr Wishart may have had more luck in speaking to his party leader if he had spoken to her during the Jubilee weekend when Ms Sturgeon and her husband were having “a whale of a time” in London.

“You might have been able to catch her, I think, there was a bit of a gap somewhere between St Paul’s and the concert at Buckingham Palace,” he added as the committee chairman smirked.

“That was your moment to nab her, but never mind.”

Speaking earlier this month, the Perth and North Perthshire said he was “surprised” Ms Sturgeon had turned down his request for an appearance.

He said: “We first wrote to the First Minister in November inviting her to appear before our Committee, and we are surprised that her response did not arrive sooner.

“Our Committee is focussed on reports and inquiries that are relevant to the people of Scotland, and it would have been helpful to have explored the issues with the First Minister.

“In this Parliament we have had inquiries and reports on universities, renewable energy and public sector broadcasting issues that cut across responsibilities of both Parliaments.

“The invitation remains open to the First Minister and we hope that some time in the future she may be in a position to reconsider her decision.”

He said: “We’ve given Nicola Sturgeon that chance to come and give her views to the Scottish affair committee, and I think the fact that she is running scared says more about her reluctancy to take accountability for some of the mistakes she’s made as First Minister more than it does about her refusal to come because she’s not accountable to this place.”