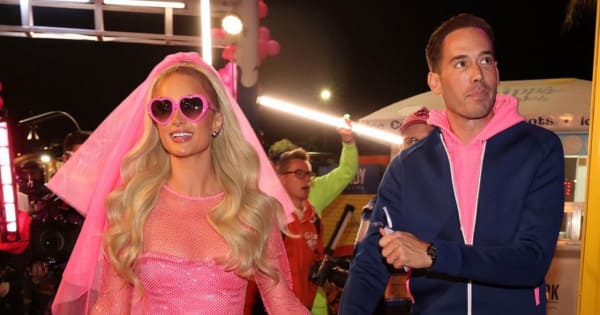 Popular American socialite and entrepreneur Paris Hilton has embraced parenthood. Uh-huh, Paris is now a mother to a newborn child who she welcomed with her husband Carter Reum. Paris And Reum got married in late 2021 after dating for a couple of years. And thereafter, the two of them have been wanting to start a family and finally, in 2023, they have made a beautiful beginning of a new chapter of their lives. Paris Hilton and Carter Reum have welcomed a baby boy via surrogacy. Also Read – Top Hollywood News Weekly Rewind: Johnny Depp’s Queensland mansion sold at whopping price, BTS to join military soon and more

Hollywood News is filled with updates on Paris Hilton embracing motherhood. The news has been all over the internet as well and Paris, Carter and their little one has been getting showered with love and blessings as they welcome a baby boy to their family. The model and entrepreneur herself confirmed the news with People.com. She said that it was always her dream to be a mother and that she is lucky to have found Carter. “We are so excited to start our family together and our hearts are exploding with love for our baby boy,” she told the portal. Also Read – Paris Hilton shares horrific ordeal of being sexually abused at boarding school: ‘They would perform medical exams, put their fingers…’

Paris Hilton gives an adorable glimpse of her baby boy

After the news was out, Paris Hilton gave a sneak peek of her baby boy. She shared a minimalistic portrait, a picture of the little one’s hand clasped around Paris’ thumb. It will tug at your heartstrings. She captioned it addressing her little baby boy telling him that he is already loved beyond words. Check out Paris Hilton’s post here: Also Read – Trending Hollywood News Today: BTS’ Jungkook’s English coaching class ad in Haryana viral, Tom Holland’s Uncharted final trailer and more

Kim Kardashian, Ashley Benson, Lindsay Lohan, Heidi Klum, Naomi Campbell, Miranda Kerr and more celebs dropped congratulatory messages for Paris and Carter. Paris Hilton had previously revealed that they had been planning on IVF during the pandemic phase. She and Reum had expressed their desire to start a family and hence, she thought of ‘getting the eggs stocked and ready.’ Congratulations to the new parents.