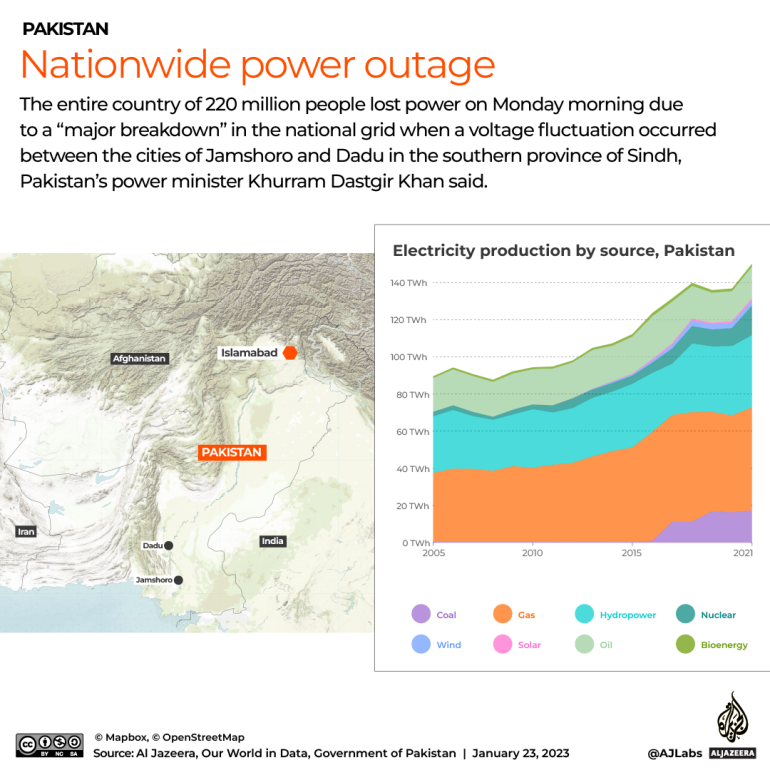 Islamabad, Pakistan – Power has been completely restored in Pakistan, says its energy minister, a day after it suffered its worst outage in months.

In a tweet, Khan added that there will be limited power outages in various areas in the coming days as coal and nuclear power plants will require more time to stabilise.

“Around 6,600 MW coal and 3,500 MW nuclear plants are estimated to take 48 to 72 hours to restart. Till the operation of these plants, there will be limited load management except for industrial users,” he wrote.

Most of the country’s electricity was restored overnight but residents in big cities, including Karachi and Lahore, continued to report breakdowns.

It was the second major outage in Pakistan in four months and the first countrywide blackout since January 2021.

Energy minister Khan said the authorities have not been able to find the exact reason for the breakdown, adding that a three-member committee has been constituted to investigate the latest outage.

“We need to probe if there was an external interference like an internet attack, although that’s less likely,” he said.

The minister also dismissed rumours that the country did not have enough fuel to run the power plants.

“All day yesterday, we were sitting in bitterly cold weather in our shop and were not able to make any sale. At night, amid freezing temperature, we had no way to keep our home warm. My children suffered as there was no gas or electricity,” he told Al Jazeera.

Shah said electricity was restored at his home and shop early Monday morning, but his woes had not ended.

“This morning when I returned to my shop, we had the electricity, but the voltage kept fluctuating and it is damaging my equipment. This is turning out to be very costly for me,” he said.

Fayyaz Jamali, who runs a primary school in Sindh province’s Sehwan city, said they did not have power for more than 24 hours.

“We don’t have water here for students, we don’t have any electricity. Our classrooms are in darkness. How can we teach properly in this situation?” he asked.