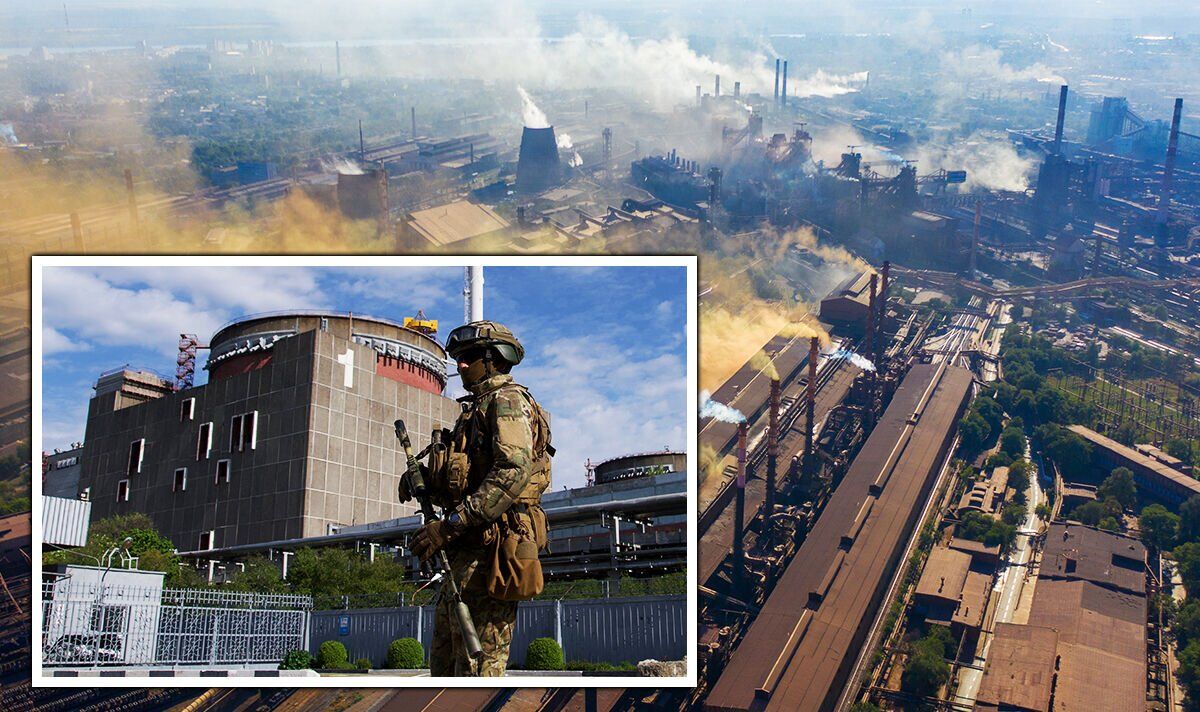 Kyiv wants to retake southern Ukraine and intelligence chiefs now believe the Kremlin is using a “scorched earth policy” in Zaporizhzhia. Officials fear the Russians will destroy everything in the region if they are unable to hold on to the land. And the UN Secretary General Antonio Guterres yesterday warned – after Russian shelling on the nuclear power plant – that “any attack (on) a nuclear plant is a suicidal thing”.

The warning comes as a report by renowned think-tank RUSI suggested tighter controls around western-made microelectronics could prevent Russia from developing or using modern weapons.

“If it’s not true, the Russians can make a goodwill gesture and hand over control of the plant to an international commission and the IAEA, if not to the Ukrainian military.”

He said the Russians used similar tactics at the Chernobyl nuclear plant when they occupied it.

“This is a strategy of terror and scorched earth used by the Russians ahead of an inevitable Ukrainian counter-offensive in the south,” he said.

Russia’s major general Valery Vasiliev, who commands the garrison of the ZNPP, said “there will be either Russian land or a scorched desert.”

He said: “As you know, we have planted mines in all the important facilities of the Zaporizhzhya nuclear power plant. And we do not hide this from the enemy. We warned them. The enemy knows that the plant will be either Russian — or no one’s. We are ready for the consequences of this step. And you, warriors – liberators should understand that there is no other option. And in case of receiving the most severe order, we must fulfill it with honour!”

International alarm over weekend shelling attacks on Ukraine’s Zaporizhzhia nuclear complex grew on Monday with Kyiv warning of the risk of a Chernobyl-style catastrophe and appealing for the area to be made a demilitarised zone.

Yevhenii Tsymbaliuk, Ukraine’s ambassador to the UN nuclear watchdog agency (IAEA), accused Russia of trying to cause blackouts along Ukraine’s electricity grid in the south by targeting the plant.

Petro Kotin, head of Ukraine’s state nuclear power company Energoatom, called for a team of peacekeepers to be deployed at the Zaporizhzhia site, which is still run by Ukrainian technicians.

“The presence of peacekeepers in this zone and the transfer of control of it to them, and then also control of the station to the Ukrainian side would resolve this problem.”

Yevhenii Tsymbaliuk, Ukraine’s ambassador to the U.N. nuclear watchdog agency (IAEA), accused Russia of trying to cause blackouts along Ukraine’s electricity grid in the south by targeting the plant.

He called for a U.N.-led international mission to the plant by the end of this month.

“We will use all possible channels of diplomacy to bring the IAEA and U.N. closer to conducting this mission. We really need it urgently, as soon as possible.”

Mr Kotin warned that if containers of highly radioactive spent nuclear fuel were broken, “it is impossible to assess the scale of this catastrophe”.

Dr Jack Watling, of RUSI, said: “In order for long-range ballistic and cruise missiles to be accurate, says Dr Watling, they have to have Western-made microchips.

“If these components can be denied then the Russians will not be able to replenish the arsenal of equipment that they have expended in Ukraine,” Dr Jack Watling said.

He points to Russia’s heavy reliance on artillery, missiles and rockets that have devastated the towns and villages of eastern Ukraine and allowed Russian ground forces to make slow, incremental advances through a shattered wasteland.

“The Russian system of fighting is largely dependent on what’s called reconnaissance strike: finding your targets and then hitting them with overwhelming firepower,” he says. “And what we found is that almost every link in that chain is dependent on Western components.”