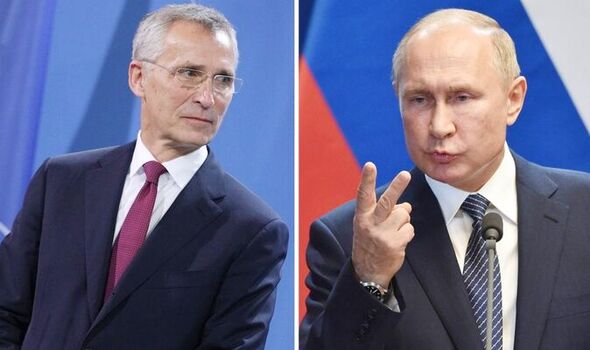 Since the start of the Russian-led assault on Ukraine, NATO has been cautious in direct involvement in the conflict in order to avoid a wide-scale war. In spite of numerous calls by Ukraine for NATO to impose a no-fly zone over the country, the alliance has verbally refused the move fearing direct engagement with Russian forces should it do so. However, a new threat has emerged revealing a highly strategic, yet sparsely populated strip of land could be the key to a wider war.

The Suwalki Gap is a thin band of land skimming the borders of Belarus, Lithuania, Poland and the Russian enclave of Kaliningrad.

He added that Russia has air defence rockets stationed in Belarus and Kaliningrad, which Putin could use to threaten to shoot down any NATO jets that aim to intercept the civilian planes.

It is also the only way to get by road or rail from Poland and Central Europe to the Baltic states — arguably NATO’s most exposed members.

NATO could be sucked into a war with Russia (Image: Getty)

The Suwalki gap (in red) is a highly strategic stretch of land (Image: Jakub Luczak)

With Russia enjoying assets such as soldiers, fighter jets and nuclear weapons in Belarus, a Russian move to seize control of the choke point may see a direct attack on NATO members Poland and Lithuania.

The thin strip is a mere 40 miles wide and has little in terms of natural boundaries, such as rivers, coastlines, valleys or mountains.

The land is barely populated, flat and an easy access route for land forces to use as a logistical supply route in the area.

The infrastructure also includes two well-maintained wide roads, as well as a railroad.

The Suwalki Gap is a sparsely populated piece of land (Image: Getty)

Since Russia’s first invasion of Ukraine, in 2014, Western government officials, military leaders, and think tank experts have paid extra attention to this relatively narrow passageway between allies, primarily because of the chokepoint it represents should Russia seek to cut off the Baltics.

Furthermore, Kaliningrad enjoys a wide and well-stocked portion of the Russian military, hence the gap could lead to a supply chain directly into Eastern Europe and the Baltic region.

However, as the piece of land transcends into Lithuanian and Polish territory, should Russia attempt to take control of the land, it would entail attacking NATO member sovereign territory.

Under such situations, Article 5 of the NATO alliance would require fellow members to come to the defence of their partners, forcing NATO into direct conflict with Russia in a worst-case scenario.

Fears are emerging Russian tanks could sweep into the one (Image: Getty)

Although there is no current indication of Russian advances toward the contentious strip of land, experts are worried about a sudden focus on the area.

However, a previous military exercise between Moscow and Minsk saw troops practising close to the delicate piece of land.

Drills during the so-called Zapad exercise practised closing the strategic straits by attacking Belarus in the direction of Kaliningrad.

Speaking of the vulnerabilities of the gap, Ramūnas Šerpetauskas, who commands a local company of Lithuania’s Riflemen’s Union said the strip was like an “Achilles heel.”

He said: “Some think there’s no point to attack us, but it must be noted that this is a direct land route to Kaliningrad.

“If they are able to overcome Ukraine, it is possible that the next blow would fall here.”

The tension between NATO and Russia has been further enflamed as both Sweden and Finland appear highly likely to join the alliance in the near future.

The expansion by the Nordic states has been met with strong condemnation by Moscow.

Ukraine has also pleaded to join the alliance, however, this has been considered a red line by the Kremlin.

Furthermore, Ukraine has to date been unable to meet joining criteria by failing to secure its borders to attack, as demonstrated by the Russian invasion of its territory.

Speaking of the solution to the imposing threat, Margiris Abukevičius, Lithuania’s Vice Minister of Defence said: “The only answer to that challenge is an increased NATO presence here.

“We know how Russia is obsessed with closing land corridors.”