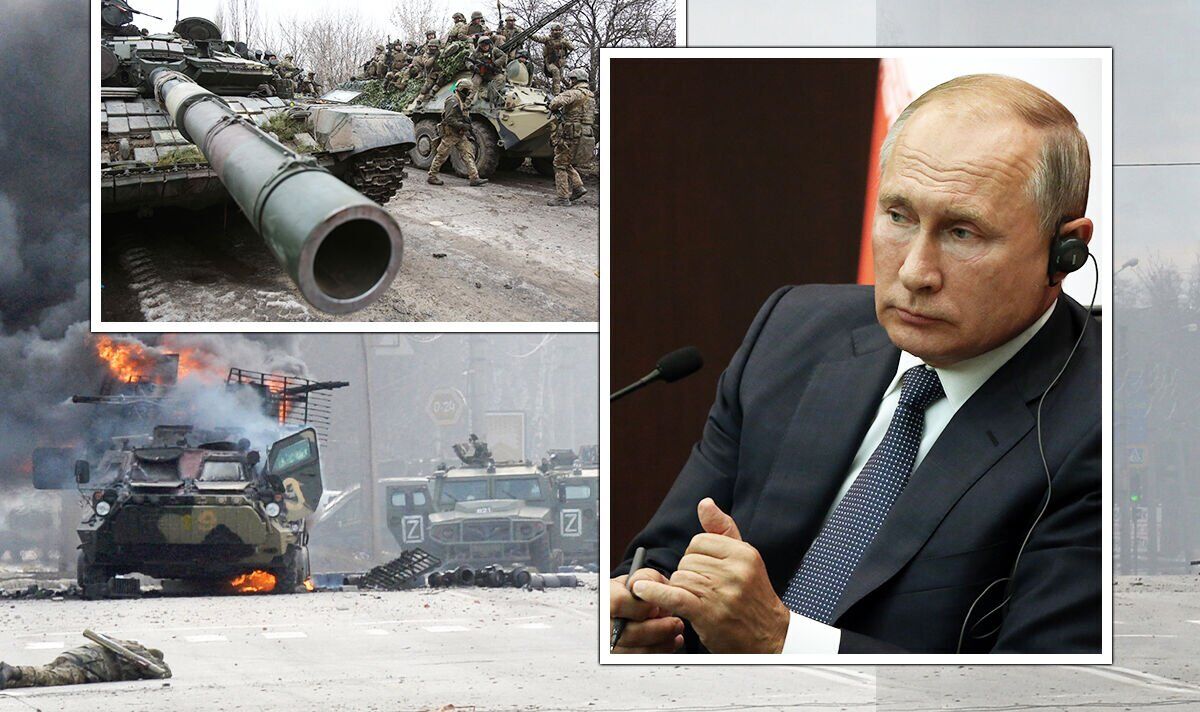 Putin has suffered a string of setbacks in Ukraine since the Russian President invaded on February 24. The latest failure of the four-month war came as the Russian Navy appeared to sink one of its own ships. An Ondatra class landing craft in Russia’s Black Sea Fleet D-106 was reportedly destroyed as it hit a Russian mine this week. The apparent friendly fire incident happened near Ukraine’s southern port city of Mariupol, a Telegram channel related to the Russian navy reported on Thursday.

The loss of the vessel compounds the problems Putin has faced during the war in Ukraine, in which Russia has suffered heavy losses, and has been forced to retreat from key areas, including from strategic Black Sea outpost Snake Island.

Amid Putin’s floundering invasion, reports have also suggested that he may be deposed in a coup as his inner circle and high-ranking military officials grow increasingly dissatisfied over the war and its knock-on effects on the Russian economy, which has been crippled by Western sanctions.

One expert who has studied Putin in detail mapped out his demise years ago, warning that the Kremlin strongman faces a bleak future.

In 2018, the expert told the BBC: “There is an awful bleakness and blackness out there awaiting him.”

JUST IN: ‘Get Frexit done!’ Campaigners ramp up referendum pressure on Macron after election chaos

Speaking in an unearthed documentary, ‘Putin: The New Tsar’, Professor Robertson hinted that the Russian people could turn on Putin as happened to Libyan leader Colonel Gaddafi who was killed and dragged through the streets by Libyans in 2011.

Another scenario, according to the professor, is that Putin could eventually be tried and killed by the Russian state in a similar fate that befell Iraqi dictator Saddam Hussein.

He said: “Even if he could arrange a handover that guaranteed he would not suffer the fate of Gaddafi or Saddam Hussein, how do you replace the incredible mainlining into your reward network of exceptional power?”

Professor Robertson applied his neurological lens as he analysed Putin’s two decades in the Kremlin.

The expert discussed the gratification the Russian President will have felt by wielding so much power for so long.

‘Putin: The New Tsar’ looks at how the Russian leader transformed from a lowly KGB officer to presidential material as he worked his way up through Russia’s civil service.

Professor Robertson compared Putin – who changed the law to allow himself to remain in power until 2036 – to other world leaders with extended terms in office.

He said: “Almost all people who hold great power for a long time begin to feel so special.

“‘I am so amazing. God must have something to do with this.

“‘Look, I can snap my fingers and they invade a country. I have the power of life and death over man and woman’.

“George W Bush confessed he thought that God was involved in his decision on the Iraq War.

“Tony Blair hinted that he had a wee chat with God now and again. Julius Caesar had himself deified while he was still alive.”

‘Putin: The New Tsar’ is available to stream on BBC iPlayer.