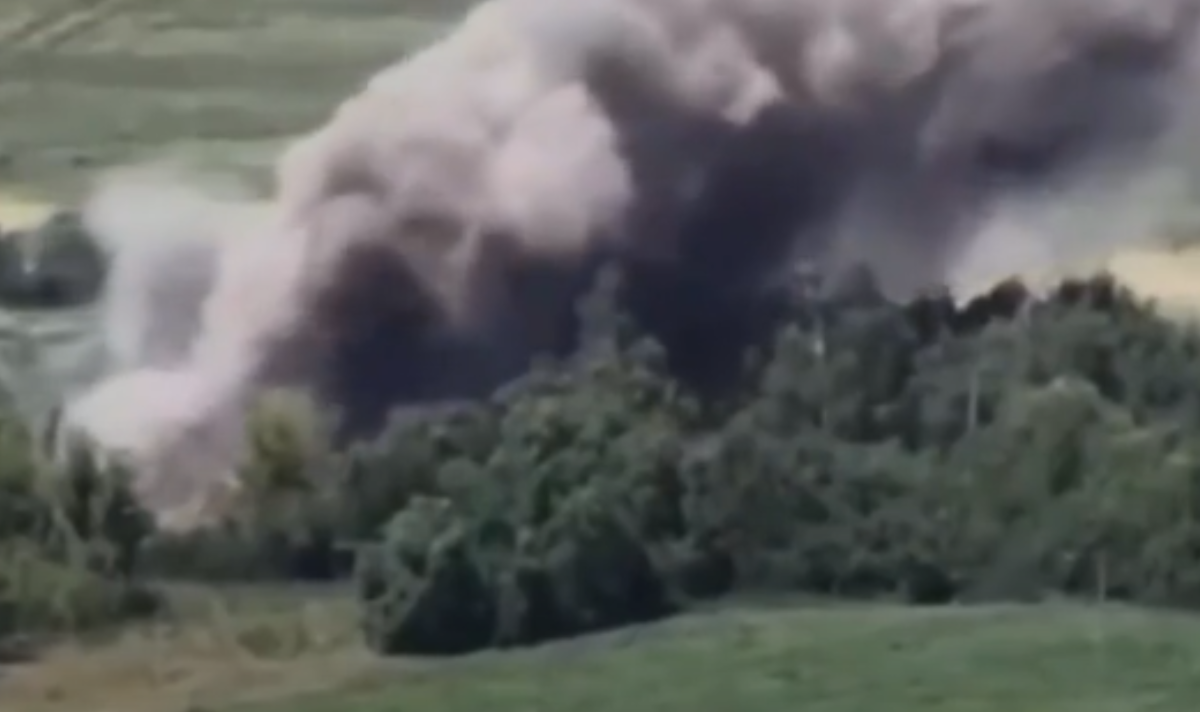 The footage from what appears to be a drone shows Ukraine’s army targeting multiple Russian armoured vehicles located in Kharkiv Oblast, Ukraine. The drone images show Ukrainian forces targeting Russian artillery and tanks. The video shows Ukrainian forces obliterating Russian forces using heavy artillery to blow up and set fire to their tanks. Russian forces have been invading neighbouring Ukraine for over three months now, and a resolution to the ongoing battle has been put on pause due to political leaders halting the process.

The drone footage shows 3 BTRs, and 3 IFVs being lost in addition to an armoured vehicle.

The images also show one of the Russian targets burning under a thick black cloud of smoke, that continues to plume up into the sky.

A big explosion can be seen coming after the Ukrainian military hit another Russian vehicle, the explosion caused a fire instantly, and flicking hues of orange flames can be seen before the overwhelming amount of smoke engulfs the whole tank.

The second vehicle appears to still be on fire as orange sparks of flames can be seen burning the remainder of the tank under a grey cloud of smoke.

The Russian armoured trucks were located in a rural field of Kharkiv Oblast, where a lot of fighting has been taking place.

The amount of Russian casualties is currently unknown, as the footage does not show any Russian servicemen trying to flee for their lives.

JUST IN: Horror as British couple thrown off Air Canada flight for NO REASON

Social media users on Twitter have been reacting to the attack.

One user @Tony_Vargas45 said: “These are minuscule losses. Russia can absorb these for decades. UA needs something big. They’re losing right now.”

@SnappyDresserJ1 said: “US estimated they lost 1000 tanks a couple of weeks ago, at least 1500 other armoured vehicles verified. they can’t absorb it because reserve equipment is often not fit for service, and their actual production of modern equipment is low. that’s why we’re seeing t-62s already.”

@SubjectNo1 said: “There is photo evidence of probably 700 tanks and a couple thousand armoured vehicles and other equipment. So US estimates are reasonable and likely low.”

@VincentMcdonDonagh said: “It’s a curious thing that there are never any bodies around these destroyed vehicles. I often if wonder they were just incinerated inside or were already outside when hit and made off. However, you rarely seen troops running around.”

@Here_and_Now74 said: “I’d have to think battle fatigue is running rampant within the Russian ranks. 4 months in and I’d be thinking a Ukrainian was about to jump out of every tree trunk, trashcan, tree line, burnt-out vehicle, or building within 5 miles of me.”

Ukraine has been gifted many weapons from NATO-aligned countries in the West, antitank devices and top-of-the-range missiles have been some of the gifted weapons of choice.

Ukrainian President Volodymyr Zelensky has asked for ongoing continuous support from the West in order to push back against the ongoing bloody Russian onslaught on their land.

With the help of NATO-aligned countries, Ukraine has had access to top-of-the-range weapons and military training for its national army.

The MoD’s latest report: “The Russian authorities have not released the overall number of military casualties in Ukraine since 25 March.

“The DPR casualty rate is equivalent to around 55 percent of its original force, which highlights the extraordinary attrition Russian and pro-Russian forces are suffering in Donbas..