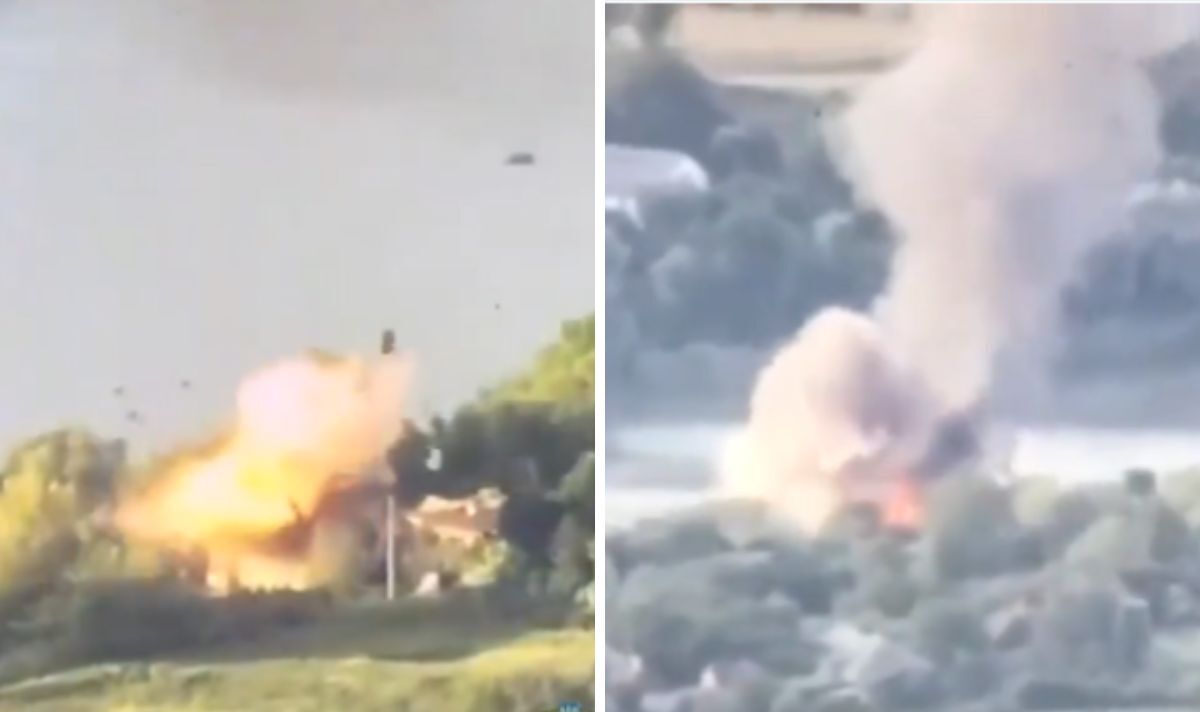 In a clip posted to social media, a Russian depot is captured from several angles exploding into a fireball as Ukrainian forces successfully hit their target. The attack was carried out by the Ukrainian 40th Separate Artillery Brigade in Kharkiv Oblast. Several additional explosions over the past two weeks have left thousands of weapons systems and ammunition rounds disabled for Vladimir Putin’s forces as Russia looks to continue its offensive in the eastern regions of Ukraine.

The footage shows a Russian site in the Kharkiv region hidden within a forested area.

It is surrounded by housing and is presumed to be a Russian-controlled region after intense fighting in the east.

The site is shown exploding multiple times from a variety of angles as Ukraine’s 40th brigade strikes it from a number of positions.

As the munitions set fire, the site explodes four more times before catching on fire, with clouds of smoke billowing from its centre.

Last week, three attacks on Russian munitions sites were carried out in eastern regions of Ukraine in 24 hours.

The first was confirmed in the Polgovsky district of Ukraine and was carried out by members of the 44th Artillery Brigade of the Ukrainian Ground Forces.

A second was orchestrated by Ukraine’s 45th Artillery Brigade after a 15-year-old local with a toy drone determined the precise coordinates of an ammunition dump in Voskresenka, Zaporizhia Oblast.

And in an undisclosed location, a third offensive was discovered after aerial footage emerged showing the depot exploding into a fireball and multiple strikes.

And a further two attacks were recorded following that day of disaster for Russian forces.

An equipment and ammunition depot in the Russian-occupied Ukrainian town of Nova Kakhovka in the Kherson region was reportedly destroyed in the middle of last week.

Another attack in the same region was discovered several days later, with researchers suggesting a Ukrainian Tochka-U ballistic missile had struck a nearby depot.

It was believed that at least three Russian supply trucks, as well as an MT-LB Soviet-era amphibious auxiliary armoured vehicle, were destroyed in the strike.

The city has come under sporadic bombardment since the start of the war and is blockaded by the Russian navy, while each side accuses the other of laying mines in the sea.

The Operational Command “South” said Russian forces fired 14 missiles at southern Ukraine during a three-hour barrage. The Russian military did not comment on the reports.

The Russian-installed leader of Crimea, which Russia annexed from Ukraine in 2014, said Kyiv had struck Black Sea drilling platforms owned by a Crimean oil company. Three people were wounded, and a search was under way for seven workers, he said on the Telegram messaging app.