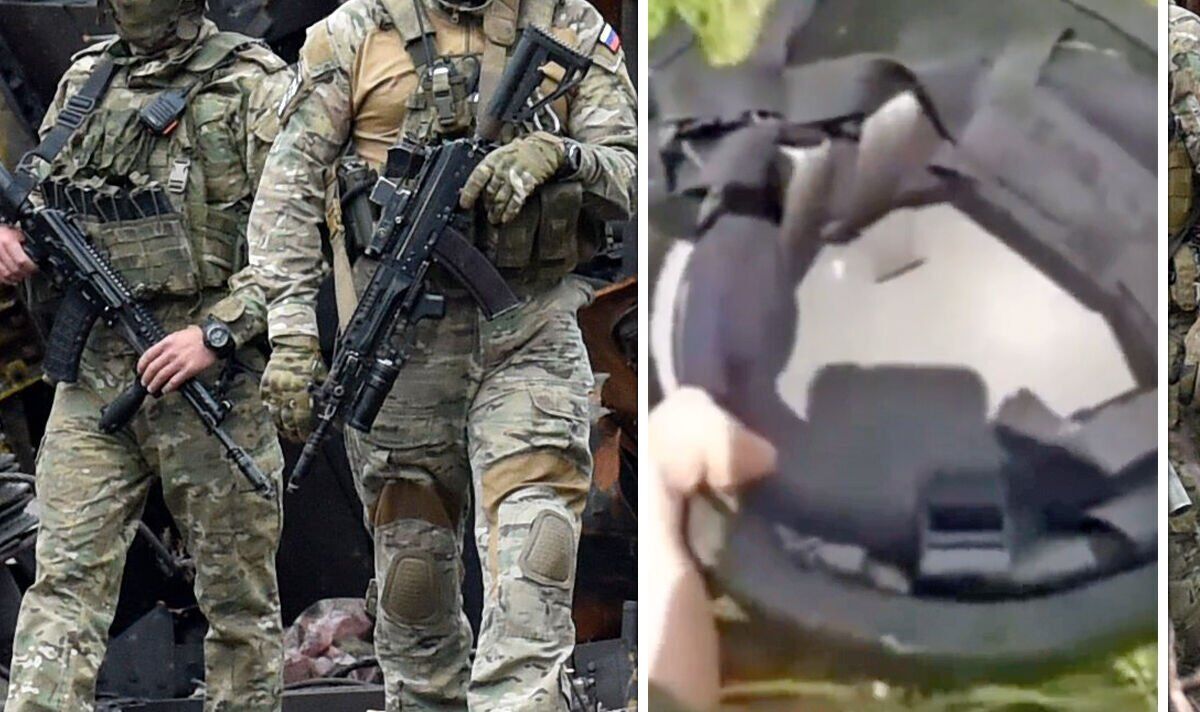 The video, posted online by the news service Visegrad 24, shows the Russian soldier examining the helmet and commenting there was “burned flesh” inside before throwing it to the ground. Russian troops have faced numerous supply problems since the country launched its invasion of Ukraine in February.

Visegrad 24 captioned the video: “A Russian soldier in Ukraine complains about the new helmet he has been given.

“He says that the burned flesh of its previous owner is stuck to the inside of the helmet.”

The video, posted on Twitter, seems to show Russian supply issues are ongoing. As Russian forces are making advances in eastern Ukraine, commanders are likely wary of repeating the same mistakes made early in the conflict which saw Russian troops move far past their supply lines and, in some instances, run out of fuel and food.

This isn’t the first time Russia has shown how undersupplied or even unprepared it was when it launched its invasion.

Last month US Commerce Secretary Gina Raimondo told lawmakers in America that Russia had been using semiconductors from dishwashers and refrigerators in its military equipment due to crippling Western sanctions which have made the parts nearly impossible to source for Russia.

She said: “Our approach was to deny Russia technology, technology that would cripple their ability to continue a military operation. And that is exactly what we are doing.”

She claimed the Ukrainian Prime Minister Denys Shmyhal told her anecdotes of Ukrainian soldiers finding equipment with semiconductors from kitchen appliances left on the battlefield.

Sanctions are also beginning to affect Russia’s ability to replenish its munitions, according to a senior US defence official.

The official said: “We know that – that the sanctions are responsible for – for making it harder for Mr. Putin to replenish those stocks, particularly when it comes to some of the electronic components that go into precision-guided munitions.”

Russia’s supply of weapons, if dwindling, still greatly outmatches Ukraine’s. This has led to repeated calls by the Ukrainian Government for the West to quickly supply more heavy weapons to be used in the eastern theatre.

Although Ukraine has been provided far superior Western equipment, including the now famed Western handheld anti-tank weapons that have devastated Russian armour, in a game of numbers Russia still has the upper hand.

Luhansk Governor Serhiy Haidai confirmed this fact as the battle for the east was raging, and Russia was throwing troops and munitions at the battle.

Speaking to the Associated Press, he said: “The enemy is burning everything out in a bid to encircle the Ukrainian group of forces.

“The Russians are advancing without trying to spare the ammunition or troops, and they aren’t running out of either. They have an edge in heavy artillery and the number of troops.”

Last night, speaking at his nightly address to the world, Ukrainian President Volodymyr Zelensky pleaded for the West to send more weapons, quickly.

He said: “We, again and again, emphasise the acceleration of arms deliveries to Ukraine. What is quickly needed is parity on the battlefield in order to halt this diabolical armada and push it beyond Ukraine’s borders.”

The Russian’s seemed to have learned from their previous mistakes and were reportedly trying to gain control of the Lysychansk-Bakhmut highway in the east of the country – a major Ukrainian supply route.

Once taken, it could allow Russia to more easily supply its own frontline troops in the region.