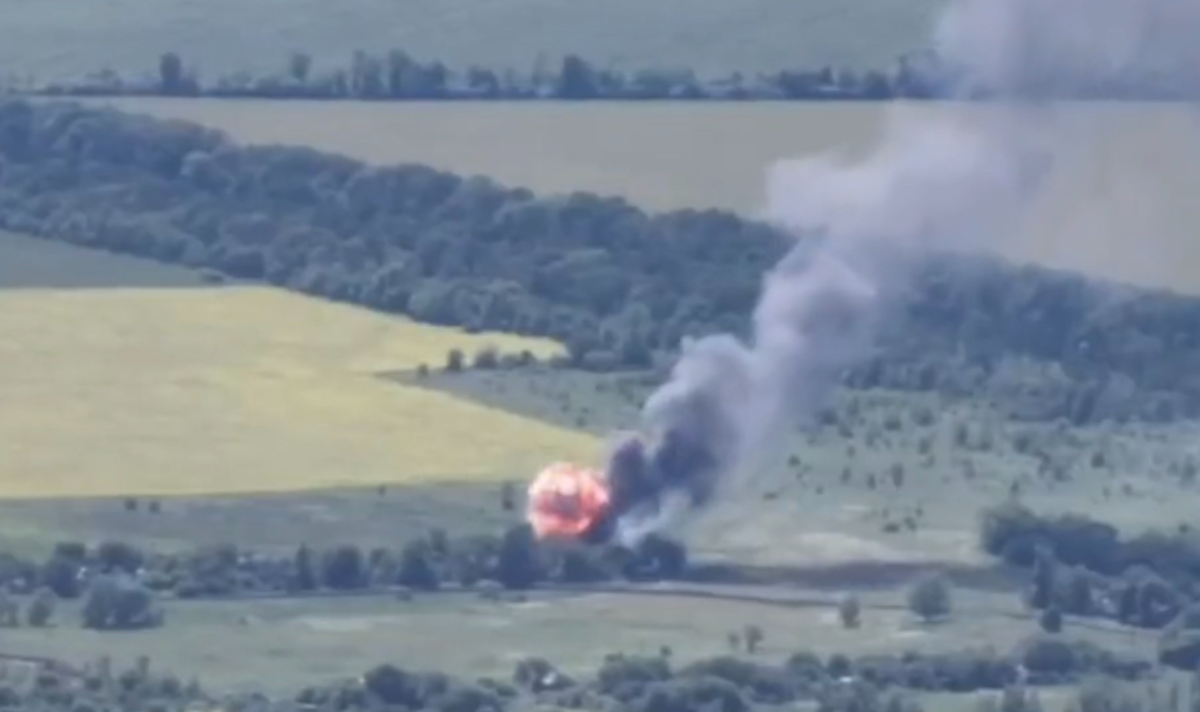 The footage from what appears to be a drone shows Ukraine’s army targeting multiple Russian bases. The images show shocking footage of Russian soldiers trying their best to flee from the explosive military attacks. Russian forces have been piling into Ukraine for over three months now, and peace talks between the country’s political leaders have halted.

Ukraine’s army begins to start bombarding the bases with heavy artillery, causing huge explosions and plumes of grey smoke to rise up into the sky.

Balls of orange flames erupt after every bomb drop, engulfing the targets instantly.

The missiles appear to hit hard and fast, giving Russian servicemen located at the bases a small chance of escape.

During the intense attack, a Russian military van can be seen driving at a fast speed to pick up a Russian soldier fleeing from the Ukrainian bombardment.

Piling into the back of the military vehicle, Ukraine’s army continues to hit hard with top-of-the-range artillery.

Twitter users have been reacting to the video footage online.

One Twitter user @AzovMolozensky wrote: “We don’t know about their conditions but the heroes of Azovstal are very much alive.”

@DrZiriki said: “Personally, I would have just dropped Napalm on the wooded sector.”

@Latenite72 said: “Well we know they hit one target with that massive black plume of smoke.”

READ MORE: Monkeypox outbreak onboard BA flight as crew forced to isolate after one tests positive

@DougBauch said: “When will the Climate Change groups call out Russia for all the extra greenhouse emissions and destruction of trees in this war? Add that to the Reparations!!”

@Hrendel_lok said: “Once the magic smoke comes out.”

Ukraine’s national army has been gifted howitzers and anti-tank weapons from NATO-aligned countries in the West.

Last week Prime Minister Boris Johnson vowed to train up to 120,000 Ukrainian troops every 120 days, in order to help them fight off the Russian advancement of their land.

The Prime Minister’s office said: “The UK-led programme would train and drill the Armed Forces of Ukraine using battle-proven British Army expertise, allowing them to accelerate their deployment, rebuild their forces, and scale up their resistance as they continue to defend their nation’s sovereignty against Russian invaders.

“International partners would be invited to host the programme if the offer is accepted by Ukraine.”