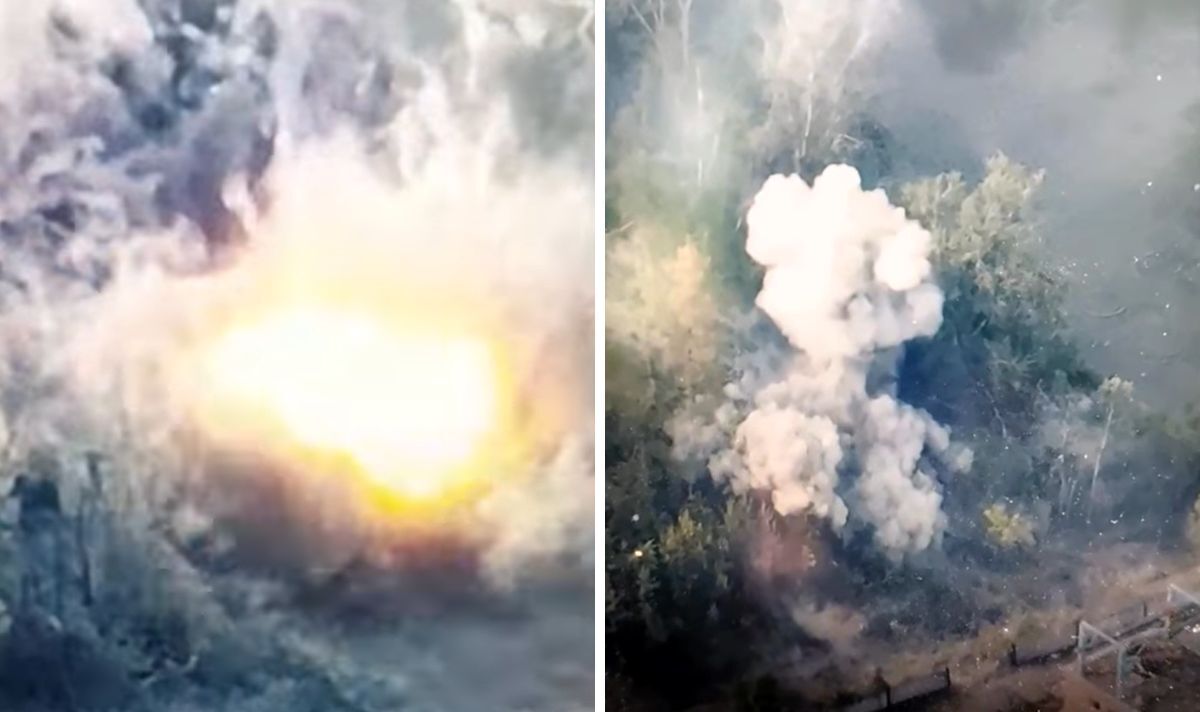 New footage that has emerged from the Donbas region within Ukraine has shown the shocking effectiveness of British M777 howitzers used by President Zelensky’s troops on the frontline. Aerial footage recorded by the 81st Airmobile Brigade of the Ukrainian Air Assault Forces has shown a missile attack successfully destroying a Russian tank and two other military vehicles. A huge explosion is filmed, shattering the armoured vehicles, as flames and smoke billow into the sky above following the launch.

The ground-towed howitzer weaponry has been supplied to Ukraine as President Zelensky requested further military aid in the form of long-range artillery weapons.

The video, which has been published on the official Facebook page of the Command of the Air Assault Troops of the Defence Forces of Ukraine, praised the provision of British weaponry.

A caption accompanying the video read: “’The video shows the successful work of artillery soldiers of the 81st Airmobile Brigade of the Armed Forces of Ukraine who, using British M777 155-mm field howitzers, destroyed equipment and manpower of the racists.

“In particular, one tank and two infantry fighting vehicles of the Russian occupiers – along with their crews – were turned into scrap metal.

President Zelensky had previously pleaded with international supporters of the Ukrainian defence to provide advanced weaponry in order to combat Russian aggression.

Earlier in June, the UK Ministry of Defence pledged to provide further assistance in the form of M270 rocket launchers.

The “cutting edge” multiple-launch rocket systems are capable of striking targets up to 80 km away with “pinpoint accuracy.”

A statement announcing the renewed military aid added: “The decision by Ben Wallace comes in response to requests from Ukrainian forces for longer range precision weapons in order to defend themselves from Russian heavy artillery, which has been used to devastating effect in the eastern Donbas region.”

Defence Secretary Ben Wallace said: “The UK stands with Ukraine in this fight and is taking a leading role in supplying its heroic troops with the vital weapons they need to defend their country from unprovoked invasion.

“These highly capable multiple-launch rocket systems will enable our Ukrainian friends to better protect themselves against the brutal use of long-range artillery, which Putin’s forces have used indiscriminately to flatten cities.”

On Friday, the Defence Secretary also met with NATO Defence Ministers to “reaffirm the UK’s support for Ukraine and underline our iron-clad commitment to defend every inch of Alliance territory.”

Moscow’s military resources have been devastated by Ukrainian defensive efforts as Zelensky’s troops, strengthened by NATO military aid, have launched a campaign of successful missile attacks on the Kremlin’s military vehicles.

Intelligence suggests President Putin is struggling to replace equipment destroyed in the conflict as reports emerging from Ukraine claim Russian forces are increasingly operating with the use of outdated, Soviet-era weaponry.

The latest data from Oryx, a defence analysis site that lists vehicles and equipment destroyed in the conflict as verified by photographic or video evidence, reports Russia has lost an estimated 4,359 military vehicles in the invasion so far.

By comparison, the same organisation claims Ukraine has only lost 1,172 pieces of military equipment including 196 tanks in comparison to a Kremlin loss of 786 tanks.