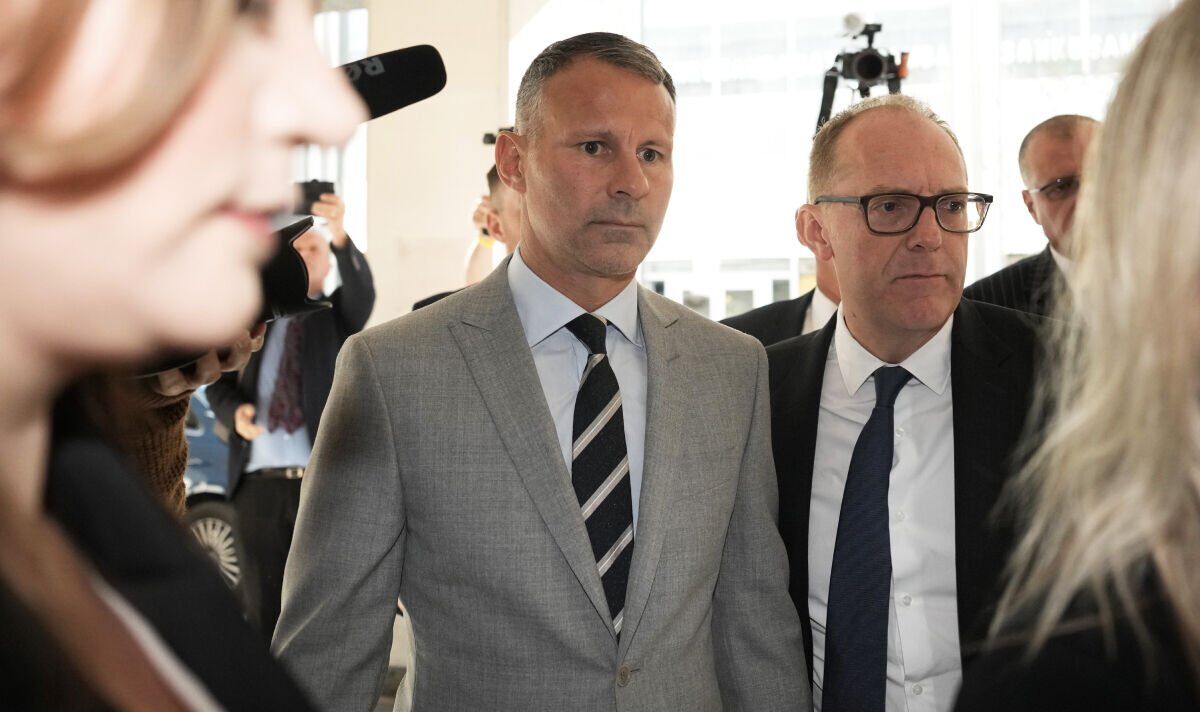 Ryan Giggs has denied threatening to send intimate videos of his ex to her work colleagues as his alleged blackmail video was shown in court. The claim was made on the third day of the trial, with jurors also hearing evidence about a Valentine’s Day Ms Greville sent to Giggs, and injuries allegedly caused by ‘rough sex’.

The 48-year-old former Wales manager is on trial at Manchester Crown Court accused of controlling behaviour towards Ms Greville between 2017 and 2020. He is also accused of headbutting her during a row at their home in Worsley, Greater Manchester, and elbowing her sister Emma Greville in the jaw in November 2020.

Giggs, who denies all charges, won 64 caps for Wales and 13 Premier League titles, two Champions League trophies, four FA Cups and three League Cups during his time at Manchester United. He is also a co-owner of League Two side Salford City.

Here are six things we heard at the trial today:

Ms Greville was also taken through evidence she gave yesterday about Giggs assaulting her on several occasions during their relationship. During a holiday in Dubai, she alleged Giggs grabbed her by the wrist and threw her outside a hotel room naked with all of her belongings.

The defence barrister read a message from Ms Greville to Giggs in which she says: “Ps my sex bruise is coming along nicely too!!” She also told a friend it had been caused by rough sex, the court heard.

Asked about this, Ms Greville said: “Because I was embarrassed and I didn’t want to admit it.” Mr Daw said: “The idea of it being a sex bruise is just a ruse you made up is ridiculous, isn’t it? The truth is from time to time you did get bruises from sex.”

Ms Greville said: “Not that I recall.”

Mr Daw also read messages six weeks after the ‘blackmail’ email in which Giggs asks Ms Greville: “Do you still have our naughty videos” and she replies: “Yes most of them”. After he asks her to send them she sends him “several intimate videos” and a video of herself dancing, it was said.

Mr Daw said: “This is just six weeks after you say he was threatening to blackmail with sex tapes and you send him a number of such videos. Why didn’t you just say ‘No, I’ve deleted them’?”

Ms Greville said: “Because we were back in a relationship. I thought he had changed and was in a different place. He promised the world and I thought we were in a good place.”

Jurors also heard Ms Greville sent Giggs a Valentine’s Day card in 2018 that read: “Happy Valentine’s Day baby. Three years ago I didn’t think it was possible to be more proud of you as I was, well you proved me wrong. You’re my inspiration, my drive, you rock my world and I love you so much.”

The court heard Giggs daughter with his ex Stacey-Cooke found and read the card when she was around 14-years-old and “put two and two together” about when the pair had got together. Mr Daw said: “You were aware it was a tricky navigation for him, his children’s willingness to accept you, not least because his teenage daughter found out you and Mr Giggs had been seeing each other for three years.”

Ms Greville said: “I didn’t know there was this issue before.”

3) The pair ‘rowed’ over Giggs ‘texting his daughter’ over dinner

The court heard the pair had also rowed about Giggs’ children at a restaurant in Dubai when Giggs was messaging his daughter at the table. Ms Greville said she confronted him about being on his phone for 20 minutes and he stormed out the restaurant.

Giggs is said to have later messaged her: “When you have children you might understand.”

Ms Greville was also shown a series of messages from August 2017 after she sent Giggs a “picture of herself in a crop top and some underpants”. Giggs responded: “Amazing pout too!! X” and “Takes me back to your first abs picture. I was like wow I’m in love”.

Ms Greville replied: “It was so f***ing naughty of me to send you that picture” with Giggs replying: “I know but you knew what you was doing”. She is then said to have messaged: “I knew exactly what I was doing”.

Mr Daw asked Ms Greville why she had sent Giggs a “provocative picture” of herself while he was married to ex-wife Stacey Cooke. Ms Greville said: “I knew that showing him a picture of myself and my abs in my gym kit, he would like it.”

She left her husband two months after sleeping with Giggs, the court heard, while Mr Daw said the marriage broke down when news of the affair with Ms Greville was leaked to the press in May 2016.

Giggs is accused of attaching a ‘sexual video’ to an email he sent to Kate Greville in 2018 with the subject line ‘Blackmail’. He is said to have told Ms Greville to reply to his messages or he would forward the video to a work group chat.

Ms Greville claims she deleted the email “immediately” and never opened the attachment. The PR executive said the email was an example of controlling behaviour by Giggs during their six year relationship. But during cross-examination this afternoon, Chris Daw QC, for Giggs, played a video to jurors he claims was attached to the ‘blackmail’ email.

The short clip appeared to show Ms Greville and two other women dancing to Ariana Grande’s Santa Tell Me in black dresses and red Santa hats. Mr Daw said: “What you did was careful and clever. You didn’t send the email with the attachment because that would have given the police officer the video. You didn’t want the police officer to have that video.”

“You did make a number of very private videos of that nature with Mr Giggs. They were very obviously not for sharing with other people and never were. Mr Giggs would have significant interest in private sexual videos getting into the public domain. You knew full well it was not a sexual video.”

Ms Greville denied the claim, insisting she did think it was a sexual video and she had given her laptop to the police for a full day to find the attachment – but only a screenshot could be found. The trial continues.