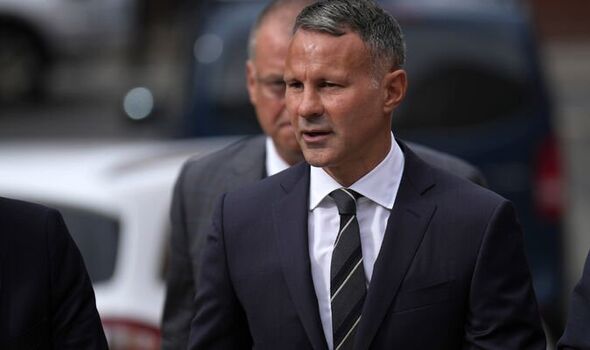 The trial of former Manchester United ace Ryan Giggs began this afternoon with fresh claims emerging about his relationship with ex Kate Greville. The 48-year-old is accused of controlling behaviour towards Ms Greville from 2017 until their split in 2020 and assault occasioning actual bodily harm against her. He is also accused of assaulting her sister Emma Greville.

Manchester Minshull Street Crown Court heard he and Kate Greville had a “toxic” and “turbulent” seven-year relationship. Jurors heard Ms Greville has levelled a number of allegations against Giggs including that he once physically threw her out of their home and that he would threaten to send personal photos to her friends. The alleged assaults against Ms Greville and her younger sister Emma took place in November 2020 during an argument at the pair’s home in Worsley, Greater Manchester, the court heard.

Ms Greville, 37, has accused Giggs of headbutting her in the face while her younger sister says she was elbowed in the jaw when she tried to pull the former Wales manager off her. Giggs, who denies all charges, won 64 caps for Wales and 13 Premier League titles, two Champions League trophies, four FA Cups and three League Cups during his time at Manchester United. He is also a co-owner of League Two side Salford City.

Here are seven things heard on the first day of the trial:

1 – Giggs and Kate Greville had a ‘toxic’ relationship

Prosecutor Peter Wright QC told jurors this afternoon that there was an “ugly and sinister” side to Giggs off the pitch. He told the court: “On the pitch his skills were abundant and a thing of beauty. Off the pitch, in the privacy of his own personal life and home or behind closed doors, there was, we say, as the facts in this case reveal, a much uglier and sinister side to his character.

“This was a private life that involved a litany of abuse. Both physical and psychological of a woman that he professed to love, a woman who in reality was, if the evidence of this case is to be believed, treated in a way that can’t be excused or overlooked by either the adoring public or the Crown.

“Eventually after years of turbulence, when the scales finally fell from her eyes, she realised she needed to remove herself from his sphere of influence.”

Ryan Giggs was in court today after being accused of attacking and controlling his ex-girlfriend (Image: GETTY)

The prosecutor told jurors Giggs had an affair which became the subject of a newspaper report in May 2016 and led Ms Greville to end the relationship. Jurors heard the pair were in an on/off relationship until November 2020 when Ms Greville discovered Giggs had cheated on her again.

According to the prosecutor, on November 1 the pair had been at The Stock Exchange in Manchester on a night out when Ms Greville texted her sister to say she was going to leave Giggs. Mr Wright said: “By that night, Kate had determined that she needed to terminate their relationship. She knew that the defendant had again been cheating on her.

“All that remained was for her to find the appropriate time and place to make her departure. During the evening the defendant’s behaviour towards her led to her making that decision. In advance of her return home she had informed her sister by text message of her plan. She intended to make her departure before he got back from the hotel.”

3 – The pair will offer alternative accounts about the alleged assaults.

The court heard that, while Ms Greville and her sister will claim Giggs assaulted them, Giggs said they became injured in a “scuffle” around Ms Greville trying to take his phone from his pocket.

Mr Wright said Giggs arrived home after Ms Greville and “tried to persuade her not to leave” but the argument became “heated” as the pair both grabbed each others’ phones. He said: “In the altercation that followed he pushed her to the ground causing her to bang and bruise her arm. She was seeking to fend him off and stuck up for herself. They were grappling with each other now on the floor. At that point Emma, the sister, stepped in to prevent anything more physical taking place. She tried to peel the defendant off her sister.

“For her pains the defendant, we say, elbowed Emma in the jaw causing her discomfort and shock that he would turn the violence onto her.” The argument moved into the kitchen where Giggs “deliberately headbutted” Kate Greville, which caused her lips to swell and bleed, it was said.

Chris Daw QC, for Giggs, said jurors will hear evidence Ms Greville told friends she did not want to leave the relationship with “nothing” and has made up the claims against Giggs to obtain “financial security”. He said the sisters “tripped and fell to the ground in the confined space of the doorway” and claims Kate Greville kicked Giggs in the face.

Mr Daw said: “The suggestion of the headbutt is not only nasty but ridiculous when looking at the evidence. Use common sense – the force would have caused serious damage to the face, most likely to the nose and eye socket.” The defence barrister said the injuries to Kate Greville’s lips were caused as the pair’s faces were in close contact as she tried to grab Giggs phone out of his pocket.

He added: “There were lines Mr Giggs would never cross. The allegations of physical assaults and violence the defence say are simply false. He never once used unlawful violence in the course of their relationship no matter how bad things got.”

Mr Daw said that, while Giggs accepts he did not behave “perfectly” in his relationship with Ms Greville, he denies any coercive or controlling behaviour. He said: “Mr Giggs fully accepts his behaviour on a moral level, at times, was far from perfect. He fully agrees he didn’t handle arguments which occurred on and off during the relationship in the best possible way.

“Some of the comments or remarks are a combination of immaturity on both sides and there was use of inappropriate language. This was also the case for Ms Greville. Sometimes the pair of them behaved like squabbling children or teenagers at best. Much of the evidence you will hear the defendant will say, especially the emotional outbursts, the ill tempered outbursts, is exactly the sort of thing that goes on between couples day in and day out.”

The ex-Man Utd star has denied all charges (Image: GETTY)

The prosecutor told jurors they would hear evidence about the couple’s time in Dubai. He said: “She went to Dubai and took up employment there. He followed her both by messaging her and physically in due course by going there to Dubai – seeking to revive the relationship.”

Ms Greville did move back to the UK and resume the relationship, the court heard. Mr Daw told jurors Ms Greville had been “free to travel” and Giggs “supported her decision” to move abroad. He said: “He encouraged her career ambitions from the start to finish and supported her decision to move abroad. He backed her with own company to give her a six-figure salary. When she set up her own business he introduced most of the clients. She was always completely financially independent. She was free to travel and see friends as much as she liked and she did so frequently and happily.”

The court heard the couple had an “umbilical” connection to their mobile phones and would spend lots of time messaging each other and other people. Mr Wright said Giggs would “harass” Ms Greville when she was out with friends and would email her when she blocked him on social media, threatening to “send personal images” to friends and work colleagues.

He said: “He would threaten to send images to her of a personal nature or threaten to send attachments containing such material to her friends and work colleagues unless she did what he wished her to do, and to do it straight away. When Ms Greville made various attempts to break off the relationship he would send harassing messages to her and via her friends to get her to change her mind.”

Jurors saw one email alleged to be from Giggs which read: “Please unblock me all this blocking malarkey is poo. Promise no more naked piccies”. The jury was shown another email that had the subject “blackmail”, with Mr Wright adding: “What on earth would drive him to put that as the header to the email he was sending to the woman who was blocking him at that time?”

Mr Daw told the court: “Both could be childish if they didn’t reply to messages quickly enough for their liking, especially on nights out and especially when drink was involved. Immaturity is not a crime any more than immorality is.”

Giggs spent 24 trophy-laden years at Manchester United during his career before retiring in 2014 (Image: GETTY)

Both barristers read out a number of names to prospective jurors before they were sworn to check none had any “personal connection” to witnesses in the case. Judge Hilary Manley told jurors they may have heard of the names but only direct involvement with them was relevant.

It was not made clear if the witnesses named will give live evidence or provide statements, but the names read out included Sir Alex Ferguson, Gary Neville and David Gill. Mr Neville’s wife Emma was also mentioned, as well as members of the Giggs family.