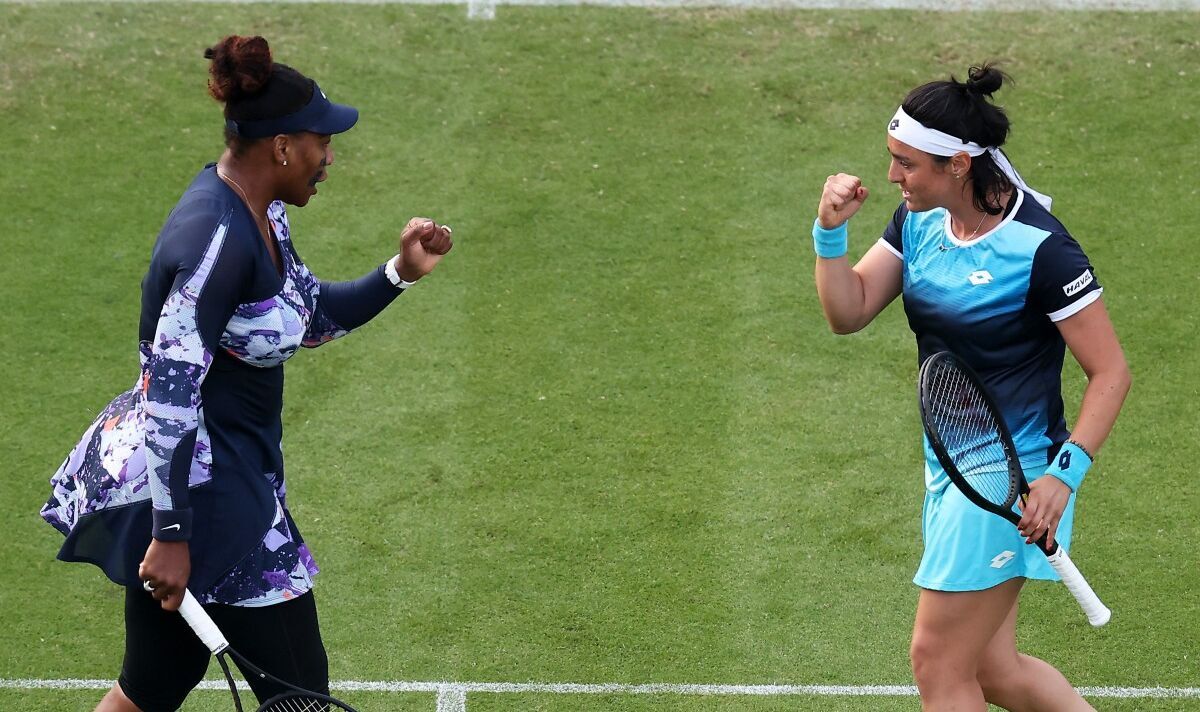 Serena Williams made a nervy, error-strewn return to competitive tennis. But her indefatigable spirit somehow got her straight back to winning ways in a thrilling tie-break. The 23-time grand slam champion and partner Ons Jabeur started slowly but finally found their rhythm to beat Marie Bouzkova and Sara Sorribes Tormo 2-6, 6-3, 13-11 to the surprise and delight of the Eastbourne International crowd.

It was a victory based very much on reputation, will-power and sheer bloody-mindedness as much as the electric tennis with which she has lit up the sport for more than two decades. She’s back, though – and if nothing else nobody facing her in the singles draw at Wimbledon next week will take anything for granted.

When Williams’ left foot slipped in the very first round last year against Aliaksandra Sasnovich, nobody imagined it would be nearly a year before she would play competitive tennis again. She could not have picked a more gentle reintroduction. People usually come to this stretch of Sussex coast precisely because they are ready to retire – not to prove the opposite.

“What a feeling!” played over the PA system at a socially acceptable level as Williams and her partner stepped onto Centre Court to warm applause. Bouzkova and Sorribes Tormo had won the toss and put Williams in to serve – if there was ever to be any rust clinging to that thunderbolt arm, it would be today.

The opening serve may have been just 90 mph, but Williams duly held in front of a strangely nervous crowd. Although it very soon became clear that she was not yet the force of old. Crashing backhands into the corner with a jurassic roar, or thumping overheads into the lush grass hard enough to forge a second channel tunnel, it was as though Williams had never been away.

But this was battleships against cruisers – and the far more manoeuvrable Czech and Spaniard the other side of the net were able to anticipate each full-barrelled blast to good effect and put away the volleys.

A missed overhead from Williams cost an early break; a second followed and the first set had been surrendered within just 31 minutes with another deft volley which left Williams once again rooted to the spot.

In fairness, the task of filling the shoes of Williams’ lifelong partner Venus seemed also to weigh heavily on Jabeur, who had been in fine singles form in Berlin last week but was missing as many shots as Williams today.

The Tunisian slapped a forehand into the net to concede the first break of the second set. Two double-faults from Sorribes Tormo allowed Williams back in, and a 114mph ace showed the fight is still in there somewhere.

Another break-back as Williams turned to her favourite tool – yet more aggression – and the other pair duly wilted. The tie-break to 10 – tennis’s version of the penalty shoot-out – was going to be down to nerve, but also who had most to lose.

Bouzkova and Sorribes Torres had the freedom but world no. 3 Jabeur and Williams had the experience.

Two match points escaped them, but a terrible missed volley by the Spaniard eventually decided the match and bought one more chance to dust off those cobwebs before Williams heads to SW19.