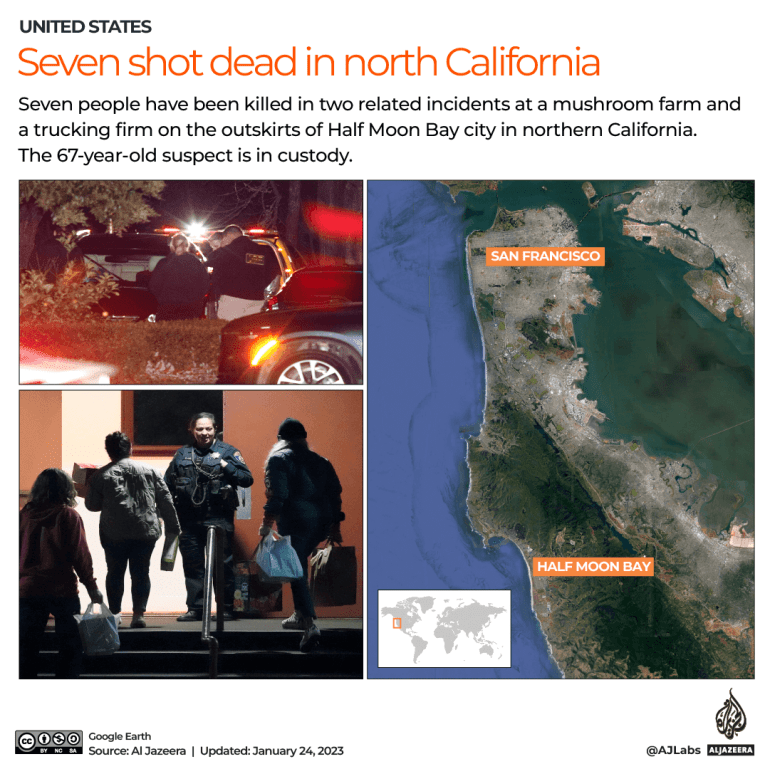 Seven killed in two shootings in Half Moon Bay, California

Seven people were killed and one person critically injured in two related shootings at agricultural facilities in a coastal community in northern California, and a suspect is in custody.

The latest bloodshed in the United States came less than 48 hours after an attacker killed 11 people at a Lunar New Year celebration near Los Angeles, California, on Saturday night.

San Mateo County Board of Supervisors President Dave Pine said on Monday that four people were killed at a mushroom farm and three at a trucking business on the outskirts of Half Moon Bay, a city about 48km (30 miles) south of San Francisco.

It was not immediately clear how the locations were connected, though Pine said the suspect worked for one of the businesses. He called the suspect a “disgruntled worker”.

The San Mateo County Sheriff’s Office tweeted just before 5pm (01:00 GMT) that a suspect was in custody.

“The Sheriff’s Office is responding to a shooting incident with multiple victims in the area of [Highway] 92 and the [Half Moon Bay] City limits,” the office tweeted.

“There is no ongoing threat to the community at this time,” the sheriff’s office said.

*Update* Suspect is in custody. There is no ongoing threat to the community at this time.

Television footage from the area showed officers taking a man into custody without incident. Aerial television images also showed police officers collecting evidence from a farm with dozens of greenhouses.

Christina Corpus, San Mateo County sheriff, said the reason behind the shootings was not yet known.

She identified the suspect as Half Moon Bay resident Chunli Zhao, 67, who was “taken into custody without incident” after being located in his vehicle in the parking lot of the sheriff’s substation in Half Moon Bay, she said. A semi-automatic handgun was found in the suspect’s vehicle, she said.

A video of the arrest showed three officers approaching a parked car with drawn weapons. Zhao got out of the car, and the officers pulled him to the ground, put him in handcuffs, and led him away.

Al Jazeera’s Rob Reynolds, reporting from Los Angeles, said one person critically injured in the shooting was being treated in hospital. According to Reynolds, a local councilwoman had described the victims as “ethnic Chinese” agricultural workers who were working at the mushroom farm and, apparently, also at the trucking company.

The shooting followed the killing of 11 people late on Saturday at a Lunar New Year event at a ballroom dance hall in Monterey Park in southern California.

California Governor Gavin Newsom, who has been in Monterey Park where that mass shooting took place, took to Twitter moments after news broke of the latest killings.

“At the hospital meeting with victims of a mass shooting when I get pulled away to be briefed about another shooting. This time in Half Moon Bay. Tragedy upon tragedy.”

At the hospital meeting with victims of a mass shooting when I get pulled away to be briefed about another shooting. This time in Half Moon Bay.

“We are sickened by today’s tragedy in Half Moon Bay,” Dave Pine added in a statement.

“We have not even had time to grieve for those lost in the terrible shooting in Monterey Park. Gun violence must stop,” he said.

“The status quo cannot be tolerated.”

Mental health services and counselling is being organised for the community, another supervisor, Ray Mueller, said in the statement.

Statements from the San Mateo County Board of Supervisors Regarding Today’s Shootings in Half Moon Bay: https://t.co/0k9PNeP4Qq

The shooting in Monterey Park marked the fifth mass shooting in the US this month and the deadliest since 21 people were killed in a school in Uvalde, Texas, according to the AP/USA Today database on mass killings in the country.

The US suffered 647 shootings with four or more victims in 2022, according to the Gun Violence Archive website.

Also on Monday, two teenage students were killed and an adult employee was injured in a shooting at a school in Des Moines, Iowa, dedicated to helping at-risk youth.

Police said one man had been charged in the shooting, and two other people remained in custody. Preston Walls, 18, of Des Moines, was charged with two counts of murder and one count of attempted murder for the shooting at the Starts Right Here programme. He was also charged with criminal gang participation.

Authorities said the shooting was the result of an ongoing gang dispute. Police said Walls was on supervised release for a weapons charge and had removed his ankle monitor 16 minutes before the shooting.

“The incident was definitely targeted. It was not random. There was nothing random about this,” police sergeant Paul Parizek said.

William Holmes – a 49-year-old rapper who founded the programme and goes by the stage name Will Keeps – was injured and was in surgery on Monday evening.

Police said Walls and all three victims were at the school on Monday when Walls entered a common area with a 9mm handgun with an extended ammunition magazine in his possession, police said.

Holmes tried to escort Walls away from the area, but Walls pulled away, “pulled the handgun and began to shoot both teenage victims”, police said in a statement.

Holmes was standing nearby and was also shot, then Walls ran away, police said.