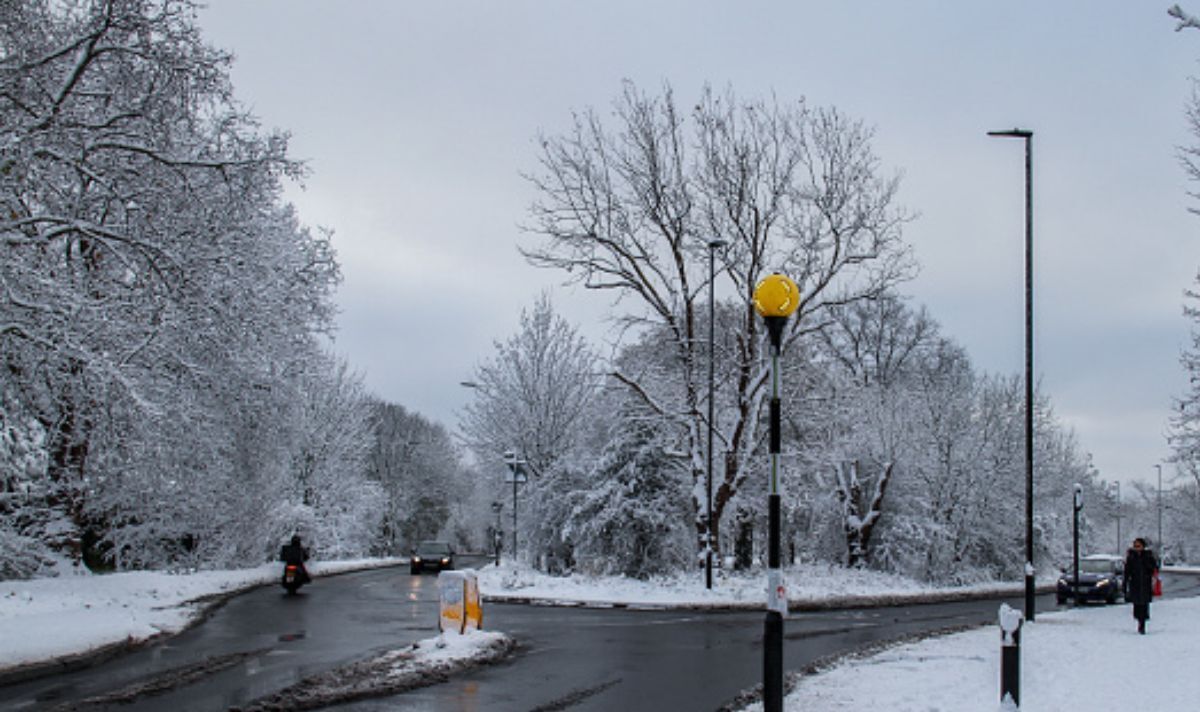 The Met Office has plunged England under an amber cold weather alert for five days as sub-zero temperatures hang around in parts of the country. The alert, which is one away from a national emergency, urges social care and health providers to prepare for bitterly cold weather which could put vulnerable people at an increased risk. Among the advice given, people are asked to check-in on loved ones, vulnerable neighbours or anyone who may not be able to heat their home adequately, especially in areas where temperatures fall below 0C at night.

The alert says: “There is a 90 percent probability of severe cold weather and icy conditions between 9am January 23 and 9am on Friday, January 27 in parts of England. This weather could increase the health risks to vulnerable patients and disrupt the delivery of services.

“The change to milder conditions has been delayed once more to the end of the new coming week with cold and frosty conditions persisting across southern areas of England. It will be dry although freezing fog will continue to be a hazard as well as some ice.

“Turning generally milder across England by day however night frosts could affect most regions Wednesday and Thursday night.”

Amber indicates severe weather action, which is one up from a yellow ‘alert and readiness’ alert and one below a widepspread national emergency.

People are urged to check loved ones have access to warm food and drinks, and that their homes are heated to at least 18C which is especially important for those with mobility issues, long term illnesses or those who are aged 65 or over.

“Avoid exposing yourself to cold or icy outdoor conditions if you are at a higher risk of cold-related illness or falls and stay up to date with the latest weather forecasts,” the Met Office added.

The Cold Weather Alert Service, which provides the forecasting alerts, has two thresholds which must be met before it is triggered. “When thresholds are likely to be met, or are actually met or exceeded, we will issue a cold weather alert,” the Met Office said.

These include looking at the mean temperature falling below 2C for 48 hours or longer and/or heavy snow and/or widespread ice.”

READ MORE: Having ice scrapers in your car could land you a hefty fine

In a five day outlook from the Met Office, its forecast breaks down what the country can expect per day. For tonight it says: “Often cloudy for much of the northern half of the UK with some rain over western hills and more generally over Scotland later. Further south, frosty with some freezing fog.”

And on Wednesday: “Early cloud and rain over Scotland moving southwards reaching southern England later. Brighter conditions following but with showers in the north. Freezing fog over southern UK during the morning.”

From Thursday to Saturday it adds: “Mostly dry through this period, away from western Scotland. Some frost and fog patches overnight into Thursday and Friday, but less so by Saturday. Windy at times in the north.”

Then, looking ahead to the end of the month and into February, its long range forecast continues: “On Saturday, cloud and patchy rain are likely across the south, this clearing during the afternoon.

“A mixture of sunny spells and showers is expected further north, but with further clouds and outbreaks of rain and drizzle spreading towards northern and northwestern areas later.

“For the rest of the period, variable amounts of cloud, and often dry conditions are expected in most parts of the UK. However, rain bearing weather systems are likely to spread from the west or northwest at times.

“As a result, rain and wintry showers are expected to be focused in the north and northwest, with southeastern areas predominantly dry.

“Strong winds with gales are possible in the far north. Temperatures generally will be near normal overall, with overnight frosts possible under the clearer spells.”