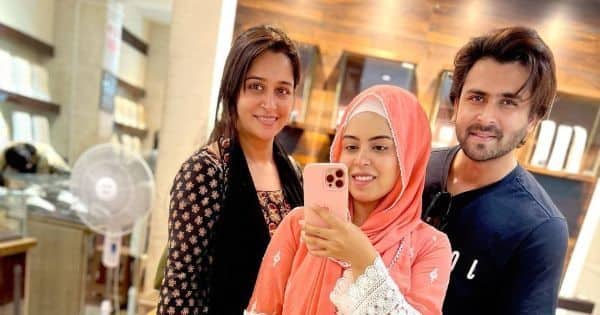 Shoaib Ibrahim and Dipika Kakar of Sasural Simar Ka fame are over the moon these days, and the reason is something very close to both their hearts. Shoaib Ibrahim and Dipika Kakar are all set to introduce a new member to their family – the former’s sister, Saba Ibrahim’s future husband, Khalid Miyaz, who’s fondly called as Sunny be everyone in the family. So how did Sunny and Saba meet and how did their relationship grow? Here’s all you need to know from elder brother Shoaib himself. Also Read – Urfi Javed badly slammed for her ‘barely there’ outfit and eating vada pav on streets; ‘Sasti Poonam Pandey’, say netizens

Taking to his official YouTube channel, Shoaib Ibrahim confirmed that his sister is indeed going to tie the knot soon with Khalid Miyaz, whom they fondly refer to as Sunny. He also announced to the world that Khalid Miyaz has been Saba Ibrahim’s boyfriend for 6 years and it’s a love marriage, adding that both families given their nod of approval to the alliance and the wedding preparations are currently on at full throttle. Later, Shoaib’s wife and fellow TV actress, Dipika Kakar, too, appears in the video to declare that it’s going to be a winter wedding, however, their fans will have to wait for the time being on any further information. Watch the video below: Also Read – BTS: Jungkook’s Namaste gesture at White House leaves Indian BTS ARMY saying, ‘Ab ki baar Jungkook ki sarkar’ [Watch]

Saba Ibrahim declares her love for Khalid Miyaz aka Sunny

Later, Saba, who’s a popular YouTuber herself, with over 22 lakh subscribers, took to her official Instagram handle to declare her love for boyfriend Sunny, with a pic where the couple can just be seen holding each other’s hands, where she also thanked her fans and well-wishers for flooding YouTube, Instagram and WhatsApp with congratulatory messages while expressing gratitude to both Shoaib and Dipika for supporting her in the choice of her life partner just like they have in all her decisions. Also Read – Don 3: Shah Rukh Khan to reunite with Amitabh Bachchan and Kajol on screen in the latest installment?