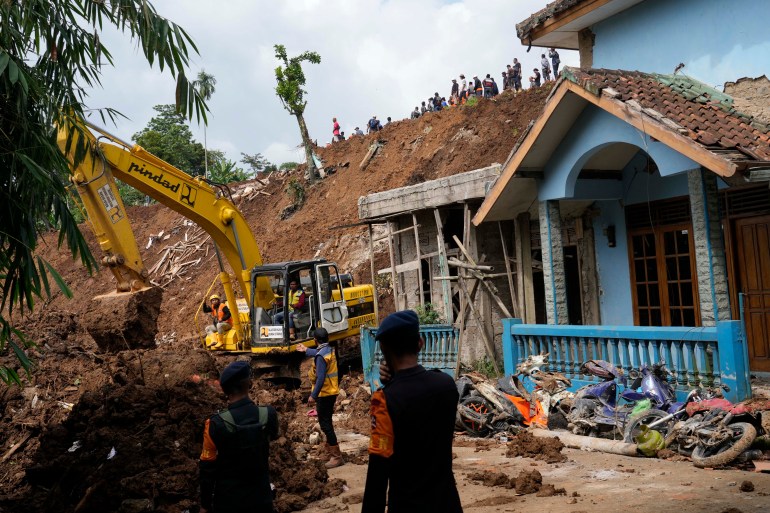 Rescuers in Indonesia have pulled a six-year-old boy from the rubble of his collapsed house in Cianjur, after he survived the earthquake because he was protected by a mattress.

The boy, named Azka Maulana Malik, had been trapped for two days and was found alive next to the body of his dead grandmother.

He appeared calm as he was lifted to safety by the rescue team in a video that was shared online by the local fire department.

“(Azka) is fine now, not wounded. The doctor said he’s only weak because he’s hungry,” said relative Salman Alfarisi, as he held Azka’s hand at a tent set up outside the quake-damaged hospital.

The 22-year-old said the boy’s mother had been killed in Monday’s quake.

“He wants to go home now. He’s been asking for his mother while sleeping.”

The death toll from the magnitude 5.6 earthquake in the west of the densely-populated Java island now stands at 271, but authorities expect that number to rise because some remote areas have yet to be reached and heavy rain has hampered rescue efforts. About 40 people remain missing and more than 2,000 are injured.

It was the most deadly earthquake in Indonesia since 2018, when a magnitude 7.5 earthquake struck in shallow waters off the city of Palu in Sulawesi, triggering a tsunami, liquefaction and landslides that devastated the city and killed more than 4,000 people.

Police, soldiers and other rescue personnel used jackhammers, circular saws, farm tools and their bare hands to dig through piles of earth in the worst-hit area of Cijendil village, where a landslide left tonnes of mud, rocks and trees.

Muhammad Tohir, 48, was sitting in his living room with his family in Cijendil when the disaster struck. They managed to escape but his sister and her two children did not.

“When I came to my sister’s house, I was devastated by what I saw,” Tohir said. “Dozens of houses had been buried by landslides. … It felt like doomsday.” He said at least 45 people had been buried alive under tonnes of mud.

Tohir and other residents searched for the missing using farm tools and managed to pull out two bodies. Two days later, rescue personnel arrived to help in the search.

Tohir said he would not give up until they could pull his sister and nieces out of the mud.

More than 170 aftershocks, including a 3.9 magnitude tremor on Wednesday afternoon, have been recorded.

“Because the quake was quite strong and raining, we feared there would be landslides. But we have continued the evacuation process now,” Henri told the Reuters news agency.

More than 12,000 army personnel were deployed on Wednesday to bolster search efforts by police, the search and rescue agency and volunteers, said Suharyanto, chief of the National Disaster Mitigation Agency.

Suharyanto, who like many Indonesians uses only one name, said aid was reaching thousands of people left homeless who fled to temporary shelters, where supplies were being taken by foot over the rough terrain.

Nearly 62,000 survivors had been moved to shelters.

Most sought protection under makeshift shelters that have been lashed by the torrential rain. Only a few were protected by tarpaulin-covered tents.

Experts said the shallowness of the quake and the lack of earthquake-resistant buildings and roads contributed to the damage.

More than 2.5 million people live in rural Cianjur district, including about 175,000 in its main town, which has the same name.

Indonesian President Joko Widodo visited Cianjur the day after the quake and promised to rebuild its infrastructure and provide assistance of up to 50 million rupiah ($3,180) to each resident whose house was damaged.

Straddling the so-called Ring of Fire, an active seismic zone where different plates on the earth’s crust meet, Indonesia has a history of devastating earthquakes and volcanic eruptions.

In December 2004, a magnitude 9.1 earthquake off Sumatra island in western Indonesia triggered a giant tsunami that swept ashore in 14 countries around the Indian Ocean, killing 226,000 people, more than half of them in Indonesia.