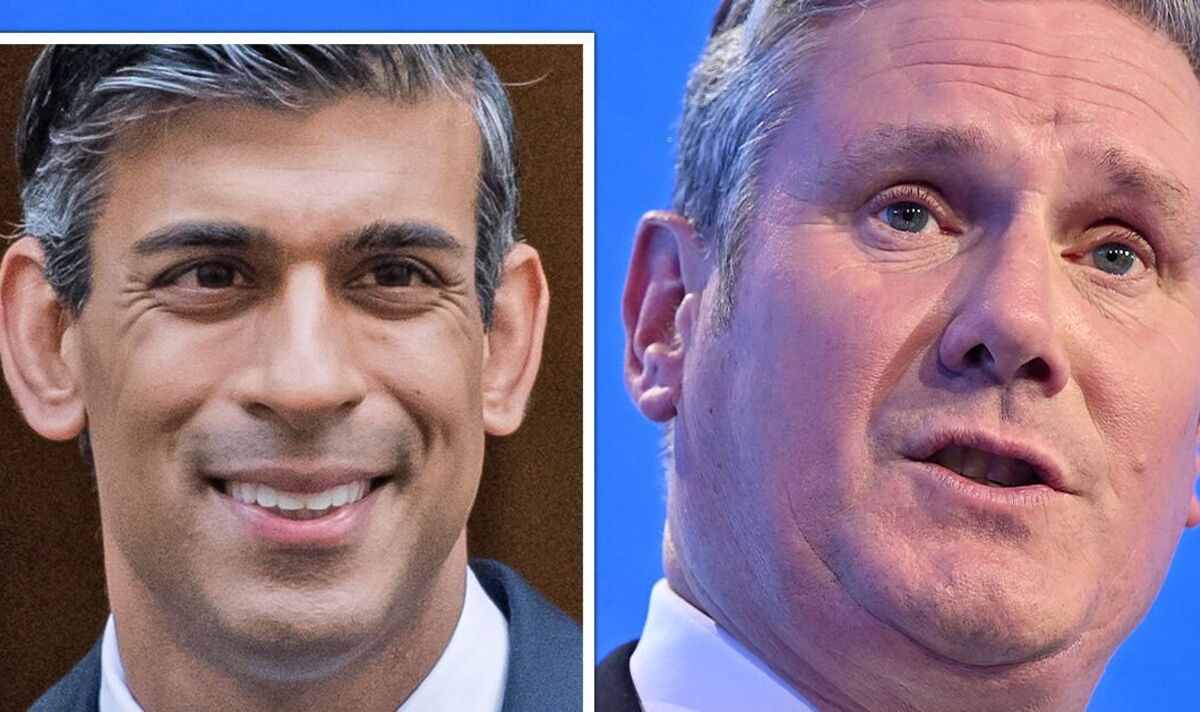 Rishi Sunak believes that Labour’s 23 point lead in the polls “is soft” and that he can still pull off a miracle victory in the next election. The revelation comes as a new Techne UK poll for Express.co.uk has seen Sir Keir Starmer increase his lead as “best Prime Minister” over Mr Sunak from 4 percent to 6 percent in the last two weeks.

The defiance from Downing Street has come amid claims that around 80 Tory MPs could quit at the next election with eight already signalling they do not want to stand again.

The exodus has been linked to unhappiness over Mr Sunak’s leadership, fears his Government will water down Brexit commitments and a resurgence Richard Tice’s reform Party with Nigel Farage hinting he is ready to make a comeback to frontline politics.

Mr Farage and Mr Tice have also approached Tory MPs to join Reform while sources in the Northern Research Group founded by former party chairman Jake Berry have hinted they could create a separate Northern Conservative Party in the same mold as the Scottish Conservatives.

This comes as the latest Techne UK tracker poll put the Tories 23 points behind Labour on 50 percent to 27 percent.

The position is four points worse than when Jeremy Hunt delvered a series of eye watering tax rises in his Autumn Statement which has also infuriated Tory MPs.

The same survey of 1,624 UK voters on November 23 and 24, put Sir Keir six points ahead in the race for “best Prime Minister”.

A fortnight ago before the Budget statement he was four points ahead.

But significantly the leader starmer has over Sunak in this poll is much smaller than the difference between the parties giving the Tories hope that the Prime Minister acan overhaul Labour.

The Tories as a party brand are behind in every category.

A Downing Street source told Express.co.uk: “We believe that [Labour’s] poll lead is soft and can be overcome.

“We wouldn’t be in it if we didn’t think we could win.

“We have two years to turn things around and which is actually quite a lot of time.

“But at the moment we need a little bit of space to work things out.”

The sourve added: “When Labour starts coming under the same scrutiny as we are in terms of policies and how they would solve the different problems things will unravel for them because they di not have any answers.”

There is a belief as well among senior Tories that Sir Keir’s uninspiring leadership is a major problem for Labour.

Meanwhile, Mr Sunak is prioritising sorting out the migrant crisis and the economy to help turn things around with the voters.

However, before beating Labour, Mr Sunak is faced with anger on his own backbenches over tax rises, Brexit and a feeling that more campaign money is being directed to Remainer southern seats instead of Brexiteer Red Wall ones in the north and midlands.

Dehenna Davison, the MP for Bishop Auckland, seen as a rising star, was the biggest surprise among eight MPs who have already announced they will step down at the next election.

It is thought that as many as 80 could quit in 2024 when it is expected the parties will next go to the polls.

Ms Davison told Express.co.uk: “I just feel I need to get away from politics and have a normal life for a bit!”

She has had a media career as well but insisted she wants some time “out of the spotlight.”

But her seat is also one which has been linked to being overhauled in the boundary changes.

She would be up agaisnt a Sunak ally Richard Holden for a new seat with his North West Durham constituency being abolished.

Red Wall MPs though have denied they are planning a breakaway party which has been linked to Jake Berry’s Northern Research Group (NRG).

Express.co.uk understands Mr Berry had been looking at a separate Northern Conservative Party in the mold of the Scottish Conservatives while Boris Johnson was still leader.

After being sacked as party chairman by Mr Sunak, it has been claimed he is looking at the idea again.

Added to that Mr Farage has also approached Tory MPs to join Reform but Red Wall MPs and members of the Common Sense Group have resisted both ideas.

Another said: “I think the stories are designed to spook people like me to try walk the floor.”

A 2019 intake MP said: “I wouldn’t pay attention to anything that has ‘Northern Research Group’ attached to it, as it’s always been little more than Jake Berry’s career vehicle. It’s a very mixed group and not ‘red wall’ at all in that sense. Has a WhatsApp group a lot bigger than the actual paid up membership – many of whom subscribe mainly to get grants back from donors.

“Don’t think anybody sees any point in joining Reform or anybody else like that, as they can all count and realise they will only gain a small proportion of votes.

“Same with them threatening to stand candidates in seats like mine (they haven’t yet), where they think they can shave votes off us. Brexit Party gained 10 percent where I am and I still won by 14,000 votes, so if anything I’d say the vote has already been shaved and they actually give a home to people who still wouldn’t vote Conservative.

“Many have questioned already why they have chosen red wall seats and not blue wall ones with remain, soft on immigration and pro net zero MPs instead if they are really looking to dish out punishment as such.”

But there is some unhappiness about where the Tories are prioritising campaign funds.

One Red Wall Tory MP noted: “Many red wallers feel we have been thrown under a bus.

“Tice and Farage want to sacrifice everything we hold dear in order to become MPs. They want a Labour govt that is held to ransom by Sturgeon so they get PR.

“I will put country first, however badly things get.”