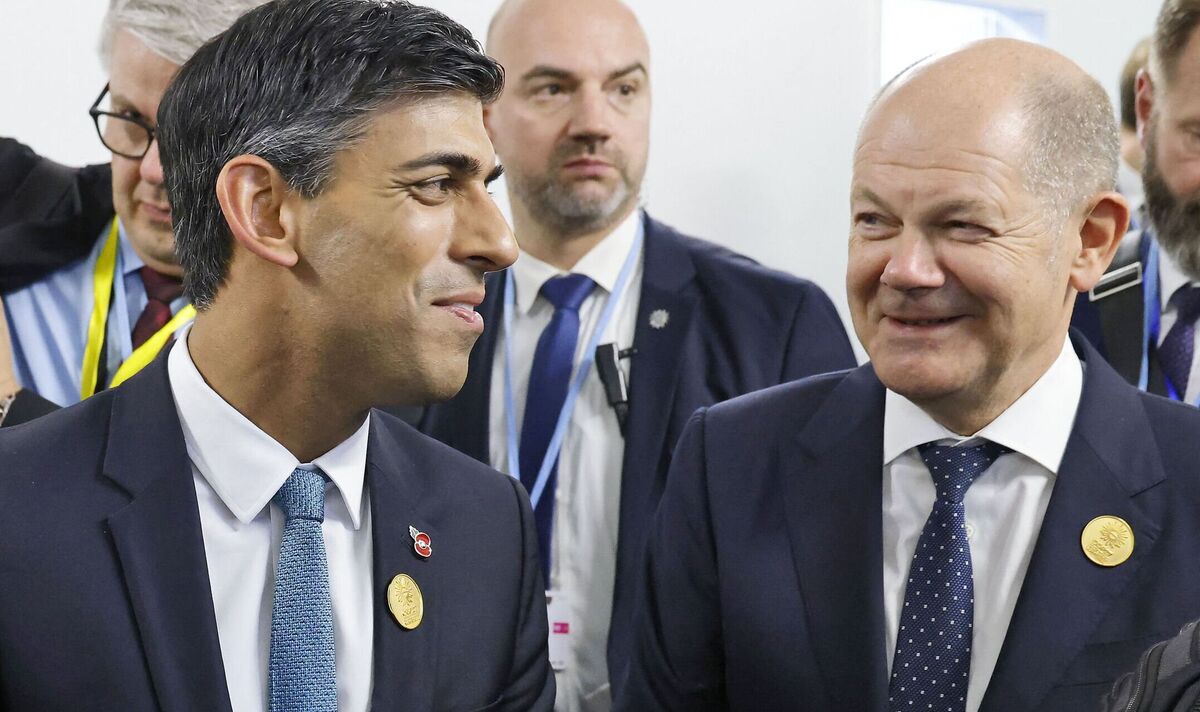 Rishi Sunak’s Government should not miss out on the opportunity to cement the UK’s security and strategic position within Europe after Britain pushed for Germany to double down on military support to Ukraine, according to an expert. After weeks of hesitation that created impatience among Germany’s allies, Chancellor Olaf Scholz announced Wednesday that his government would provide Ukraine with Leopard 2 battle tanks and approve requests by other countries to do the same. The German government said it would initially provide Ukraine with one company of Leopard 2 A6 tanks, or 14 vehicles. The goal is for Germany and its allies to provide Ukraine with 88 of the German-made Leopards, which comprise two battalions.

“This is the result of intensive consultations, once again, with our allies and international partners,” Scholz said in an address to German MPs.

“It was right and it is important that we didn’t let ourselves be driven (into making the decision),” he added.

According to the Research Director at the German Council on Foreign Relations (DGAP) and Head of the Alfred von Oppenheim Center for European Policy Studies, Sir Roderick Parkes, the move was also prompted by Britain’s military efforts to aid Ukraine against Russia‘s invasion.

Last week, the UK Government pledged a new defence alliance with the governments of Estonia, Poland, Latvia, Lithuania, Denmark, the Czech Republic, the Netherlands and Slovakia, in support of Ukraine.

Asked whether the so-called Tallinn Pledge influenced Berlin’s decision, Sir Roderick told Express.co.uk: “For me what happened last week with the Tallinn Pledge is kind of the completion of what Britain has been trying to do since Brexit, which is to say that the Franco-German motor, which surreally celebrated 60 years of it being the motor of European integration, just didn’t realise that it had been completely sidelined by this East-West axis.

“Most significantly to me was seeing the Netherlands and Denmark being in the middle.

“And we saw Mark Rutte and the Netherlands suddenly waking up to the fact that there is this alternative alliance in Europe to the Franco-German one.

“That to me is what the UK has been trying to do since Brexit, especially with Johnson trying to use to war in order to scupper lower expectations on the UK after Brexit.

“So everything has played out nicely, but the question for me is whether the new British Government will make use of that and say ‘this is what we’ve been pushing for people to rethink what a new European order looks like, beyond the EU’.

“I don’t think they will though. Everything I’ve heard from the UK is ‘we don’t know whether to back the old Franco-German court even though they delivered us a Brexit that we really revenge or to go in with this new axis’.

“I think they want to see what happens but Sunak doesn’t realise that the UK is pivotal to whether we flip back to the Franco-German court or we get this new thing backed up.

“And if they’re not willing to take the plunge now, unfortunately, in four/five months from now we’ll go back to France and Germany defining the future of Europe, because we will be talking about the economy and trade much more than security.”

In a joint statement, the UK and its European allies said they “reaffirm our continued determination and resolve to supporting Ukraine in their heroic resistance against the illegal and unprovoked Russian aggression”.

The statement continued: “We condemn Russia’s attacks designed to terrorise Ukraine’s people, including intentional attacks against the civilian population and civilian infrastructure which may constitute war crimes. We reject Russia’s ongoing violation of Ukraine’s sovereignty, independence and territorial integrity, and its illegal claims to have annexed Ukrainian territory.

DON’T MISS:
Ukraine to get 200 Western tanks after German U-turn [INSIGHT]
Italy’s ‘most famous and loved’ bear known for bakery theft has died [PICTURES]
Pensioners to be ‘plunged into poverty’ by new retirement age change [ANALYSIS]

“We recognise that equipping Ukraine to push Russia out of its territory is as important as equipping them to defend what they already have. Together we will continue supporting Ukraine to move from resisting to expelling Russian forces from Ukrainian soil. By bringing together Allies and partners, we are ensuring the surge of global military support is as strategic and coordinated as possible. The new level of required combat power is only achieved by combinations of main battle tank squadrons, beneath air and missile defence, operating alongside divisional artillery groups, and further deep precision fires enabling targeting of Russian logistics and command nodes in occupied territory.

Ukrainian President Volodymyr Zelensky expressed satisfaction after Berlin’s decision. Several European countries have equipped their armies with Leopard 2 tanks, and Germany’s announcement means they can give some of their stocks to Ukraine.

“German main battle tanks, further broadening of defence support and training missions, green light for partners to supply similar weapons. Just heard about these important and timely decisions in a call with Olaf Scholz,” Zelensky wrote on Twitter. “Sincerely grateful to the chancellor and all our friends in (Germany).”

It is not clear when or how the tanks would be delivered to Ukraine, or how soon they could have an impact on the battlefield. Military analysts have said Russian forces are thought to be preparing for a spring offensive.