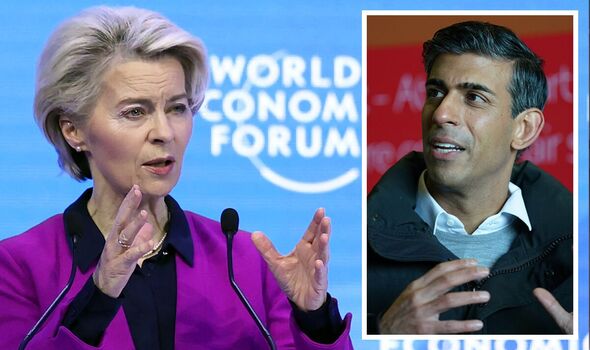 Leo Varadkar says he ‘has regrets’ over Northern Ireland Protocol

Rishi Sunak has been urged to take action now over the Northern Ireland Protocol, with the Prime Minister and his Government being accused of “running scared” of the EU. The pro-Brexit European Research Group believes now is the time for the Government to take action over the hated Protocol, a Conservative Party insider has said. The Government is currently in talks with the European Union to iron out issues with the Northern Ireland Protocol, which has been causing delays, supermarket shortages and increased costs for businesses.

The Biden administration is understood to be putting pressure on both sides to reach an agreement ahead of the 25th anniversary of the Good Friday Agreement in April.

The source told the Daily Express that the Government’s refusal to use the Northern Ireland Protocol Bill, which would allow the UK to suspend the legislation entirely, makes us look like we’re “running scared” from the EU.

They added: “We’ve got the legislation through, we need to use it.”

The main reason the UK is not enacting the Protocol is thought to be for fear of a trade war with the EU.

But the party insider told the Daily Express the EU wouldn’t launch a trade war, claiming the bloc will be reluctant to alienate one of its main trade partners.

They said “the only thing the EU responds to is force”, urging the Government to rip up the Protocol completely.

The Government has been urged to scrap the legislation in its entirety by Brexiteer David Jones and DUP MP Sammy Wilson, who said it “cannot be tinkered with; it has to be removed and replaced by other arrangements that respect the UK’s integrity and protect the EU single market”.

Writing in the Telegraph, the two MPs warned that “all consensus” in Northern Ireland “has been shattered by the implementation of the Protocol”.

The Government is currently in talks with the European Union to iron out issues with the protocol (Image: Getty)

Earlier today, it was reported that former PM Boris Johnson fears Mr Sunak’s Government is ready to give too much away in a deal to solve the problems in Northern Ireland.

Sources close to the former Prime Minister said Mr Johnson is “deeply concerned” the Government will strike a compromise with the EU over the Protocol which gives a role to European judges.

Insiders told the Daily Mail he fears the European Court of Justice may end up as the final arbiter of EU laws that apply within Northern Ireland, in an attempt to bring an end to the dispute.

This comes as the Government steps up its efforts to resolve issues with the Protocol, which have been ongoing since October 2021.

Mr Johnson is ‘deeply concerned’ the Government will strike a compromise with the EU (Image: Getty)

The draft deal will reportedly include a layer of protection to prevent the European Commission from directly referring disputes to the European Court of Justice.

But many Tory MPs want the ECJ to have no role whatsoever in policing the deal.

European Research Group chair David Jones said Mr Johnson could speak out on the problem, saying that the “views of any former PM on such an issue are important”.

Yesterday, a Government spokesman said: “As we’ve said repeatedly, any solution on the Protocol must address the range of issues including governance and the democratic deficit on how new EU laws apply in NI.”

Jeffrey Donaldson said: ‘The Northern Ireland Protocol has never had the support of unionists’ (Image: Getty)

While little tangible progress has been made to address the issues in Northern Ireland, figures in the EU appear to be softening their stance on the issue.

Two days ago, Irish Taoiseach Leo Varadkar admitted he had regrets over the Protocol being imposed in Northern Ireland without the support of unionists and nationalists.

There has been a continuing stalemate in Northern Ireland since the Democratic Unionist Party (DUP) withdrew from the institution in protest against the Protocol.

There has been no functioning devolved Government at Stormont since February 2022, with the DUP demanding fundamental change to the Protocol before it considers a return to the assembly.

Mr Varadkar said he hoped a resolution could be reached “sooner rather than later”, describing UK Prime Minister Rishi Sunak as someone he believed would “go about doing business and getting things done”.

He added: “The possibility of an agreement in the next couple of months is very real and, with reasonableness and flexibility on both sides, it can be achieved.”

Responding to the comments, DUP leader Sir Jeffrey Donaldson said: “The Northern Ireland Protocol has never had the support of unionists and never will enjoy unionist support. It was imposed against the will of unionists.

“Whilst the Taoiseach’s comments are welcome, rather than focus on the past, London, Dublin and Brussels must now redouble their efforts on replacing the Protocol with arrangements that unionists can support.”