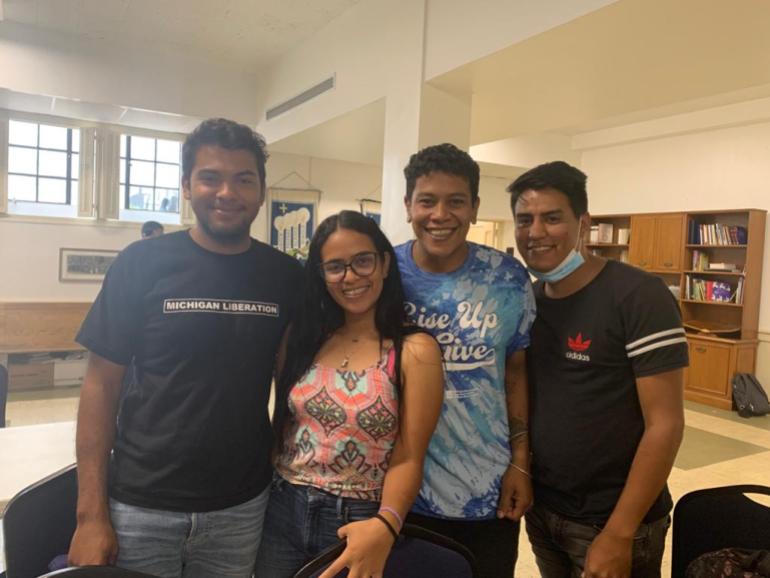 Texas and Arizona bus thousands of migrants to US capital

Washington, DC, the US – In the basement of a church, a short walk from the US Capitol Building, Daniella rummages through a pile of donated clothing and picks out a pair of yellow pyjamas that appear to be her size.

The 23-year-old Venezuelan and her boyfriend have just arrived in Washington, DC, after a free 36-hour bus ride from Texas with several dozen others. Days earlier, the couple had applied for asylum in Texas after crossing the border with Mexico, citing dire economic and political conditions in their home country.

“Like many people here, we didn’t have enough money for a plane or bus ticket to our destination, so we took this free bus ride,” said Daniella, who spoke to Al Jazeera on condition that her last name be withheld. “We heard that here, we would get support and help to get where we need to go, which is New York.”

They are among more than 7,000 migrants who have been bused from Texas and Arizona to the nation’s capital since April, in what critics call a “political stunt” by the Republican governors of the two states to protest President Joe Biden’s border policies.

“By busing migrants to Washington, DC, Texas is sending a clear message: we should not have to bear the burden of the federal government’s inaction to secure the border,” Texas Governor Greg Abbott said in a statement in April.

Indeed, as the country gears up for midterm elections in November, Republicans have seized on the issue of record-breaking migrant arrivals to denounce the Biden administration’s handling of security at the US-Mexico border, slamming his efforts to overturn the anti-immigration legacy of former President Donald Trump.

Nim Kidd, the chief of the Texas Division of Emergency Management, which is responsible for the state’s emergency-response measures, said in late June that the state had spent $5.3m to send people to Washington, DC.

Migrants who spoke with Al Jazeera said they were unaware of the political circumstances surrounding the buses that took them thousands of kilometres northeast of where they arrived in the US. And while they say they have received a warm welcome in Washington, migrant advocacy groups contend that the very act of putting people on buses to make a political statement is cruel.

“Both Governor Abbott and Governor [Doug Ducey of Arizona] have made clear that this is a political stunt that they are carrying out to send a political message to the Biden administration, regardless of how much it costs the states of Texas and Arizona, or how it impacts the migrants or the people on the ground,” Aaron Reichlin-Melnick, the policy director at the American Immigration Council, told Al Jazeera.

“For migrants themselves, even those who voluntarily get on a bus to DC, being used as a political weapon is inherently degrading.”

In the dining room of the church, whose officials asked Al Jazeera not to reveal its name because of security concerns, volunteers lay out food, clothing and hygiene kits for newly arriving migrants, many of whom are ultimately headed to other US destinations. Organisers take down people’s information and help them find shelter for the night, before coordinating their onward travel. This is one of several receiving sites in the city.

Volunteers aiding the new arrivals told Al Jazeera that dozens of buses have arrived since April, generally early in the morning or late at night, packed with hungry and exhausted asylum seekers mostly from Venezuela, Cuba, Nicaragua and Haiti.

Gilbert and Norelis, a young married couple from Venezuela who spoke to Al Jazeera on condition that their last name be withheld, arrived in Washington in late July with their eight-year-old daughter and seven-month-old son. They fled their home country several months ago after Gilbert was detained by the state over a falling-out with his government-funded employer.

Norelis says the bus ride to Washington, DC was arduous for their baby, who vomited up the single bottle of milk he was given for the trip and could not eat the food rations given to adults. Her main focus now, she says, is to enrol her daughter in school: “We heard that there are organisations and shelters in New York that help people with families, and we want to go there.”

Diana Weyandt, a volunteer with the Migrant Solidarity Mutual Aid Network, a coalition of local groups that have been assisting migrants, says she is proud of the work they have been doing, despite the circumstances.

“While I’m happy to receive the migrants and support them in any way I can, I think that Texas doing this is an attempt to use migrants and to demonise them,” Weyandt told Al Jazeera. “It’s a very racist stunt to try to manipulate people, to act like it’s migrants’ fault for leaving their home countries and coming to the United States.”

The coalition of aid groups says their resources are quickly dwindling, and they are urging the city to allocate funds for their efforts. Last month, Washington Mayor Muriel Bowser called on the federal government to deploy troops to assist with the influx of arrivals.

The Migrant Solidarity Mutual Aid Network has denounced that request as an effort to “militarise” an issue that should be handled in a more humanitarian fashion: “We are worried that issues that happen at the border will all start happening in DC – guards who don’t care about people, separation of families, and increased surveillance,” organiser Ashley Tjung told Al Jazeera. “We think the DC government needs to step in and provide a dignified welcome and response to everyone who is arriving.”

DC DHS is excluding migrant families from full access to city resources, which is their legal right. Migrants staying in DC are being denied case managers, blocking them from enrolling kids in schools and from getting medical insurance and care.

Here is our full statement: pic.twitter.com/bLSjCFZMhQ

While many migrants have left Washington, DC for other US cities, some, especially those with no contacts in the country, have opted to stay in the capital.

Carmen, who left Nicaragua with her four-year-old daughter after being fired from her factory job for taking part in anti-government protests, said she had nowhere else to go.

“I heard there was a free trip to Washington, and I decided to do it,” she told Al Jazeera, speaking on condition that her last name be withheld. “People who were travelling with me wanted to go to New York, and they got tickets to go. I decided to stay here.”

Carmen says she has been struggling to support herself financially since arriving in Washington in April, as her work permit has not yet been issued. Enrolling her daughter in school, which requires a permanent address, has also proven difficult.

For several months, she has been staying with Claire H, a local resident and volunteer who has been aiding newly arrived migrants.

“As a stunt it’s embarrassing, and I find it offensive that the governor of Texas would use people as pawns,” Claire H, using her first name and last initial in order to protect her privacy, told Al Jazeera. “At the same time, we’ve been able to help people who otherwise would have been under horrible conditions.

“Them coming to DC in itself is not a problem,” she added. “It’s the inhumanity of throwing people on a bus and just dropping them off, making it someone else’s responsibility – that’s the problem.”