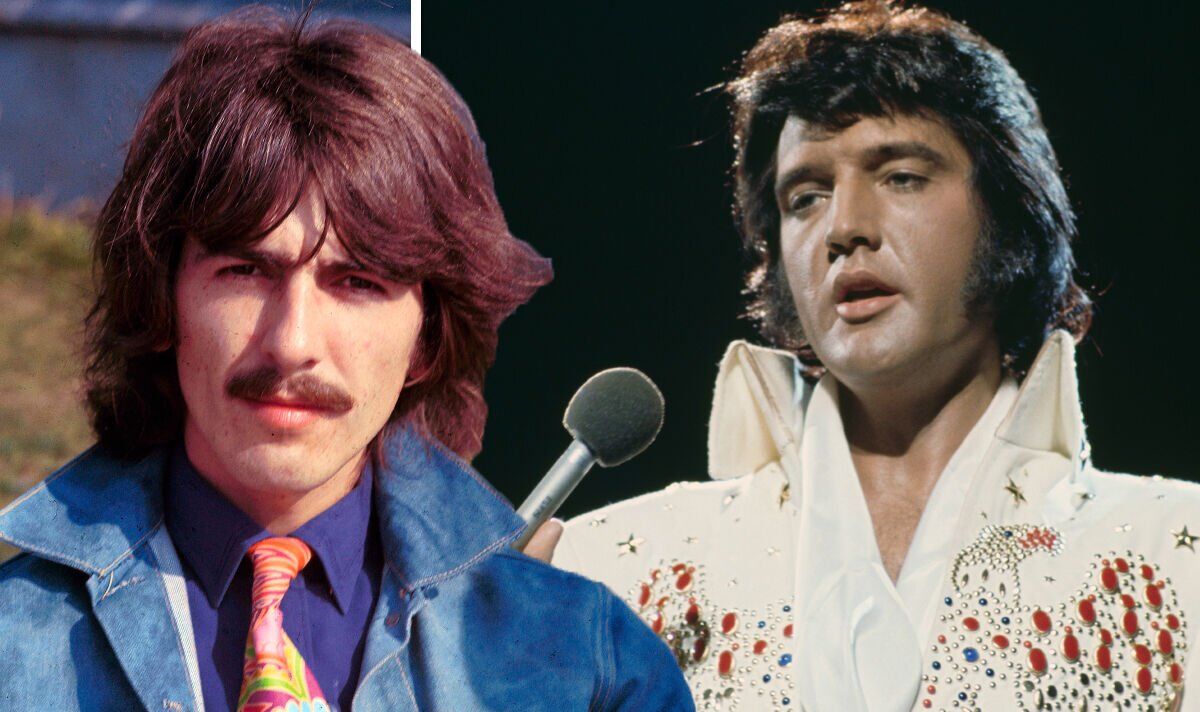 The Beatles became one of the biggest and most influential bands of all time, but they couldn’t have done it without the inspiration provided by Elvis Presley. In 1950s England, John Lennon, Paul McCartney and George Harrison adored the King of Rock and Roll. However, during the star’s final years of life, he changed drastically. He gained weight, became reliant on prescription drugs and alcohol, and was generally washed up. When Harrison saw this first-hand, he was devastated.

Before Harrison died on November 29, 2001, he looked back on meeting Elvis for the final time. He said: “I met him in Madison Square Garden a couple of years before the end.”

Elvis died on August 16, 1977, of cardiac arrest. He was found in his home, Graceland, by his girlfriend at the time, Ginger Alden. His daughter and only child, Lisa Marie Presley, was just next door. He was 42-years-old.

Harrison recalled: “It was a bit sad really because he had all those squawking singers and trumpet players and that stuff. But he had a great rhythm section – James Burton and all that gang – and I just wanted to say to him: ‘Just get your jeans on and get your guitar and do [the song] that’s alright with me mama and b***er all that other c**p.”

Harrison later angrily spoke about how fame and his desire to please his fans led to Elvis’ death. He mused: “They’ve got lots and lots of songs they can play forever. But what do they want? Blood? They want us all to die like Elvis Presley? Elvis got stuck in a rut where the only thing he could do was to keep on doing the same old thing, and in the end his health suffered and that was it.”

The Quiet Beatle was likely so furious because of how much he looked up to Elvis. He once spoke candidly about hearing the star’s music for the first time as a child in Liverpool in his book George Harrison on George Harrison: Interviews and Encounters. He said: “When I heard Elvis’ Heartbreak Hotel, I was on my bike passing somebody’s house, and they must have had a gramophone playing. I couldn’t believe the sound of that record.”

He later explained how it was like a religious experience to him. He even compared it to the music made by the Hindu gods – the religion he was a part of in his later life. “In a way,” he said. “When I heard Heartbreak Hotel by Elvis coming out of somebody’s radio when I was a kid on my bike, that is still Krishna’s flute. The music is still that mystical sound that’s saying: ‘Hey, come on!'” He added that the music of Hare Krishna’s flute had the power to “wake him up”.

Harrison later pointed out: “You’ve got to remember that in the 1950s, America was more cool than Britain, with everybody having their little Chevys or Cadillacs. We were coming out of a world war, and it was depression. So for us, that was like the sound of hope.”

He was not the only member of The Beatles who held a powerful reverence for Elvis.

Lennon also spoke very highly of the iconic musician. He once famously said: “Without Elvis, there would be no Beatles.” He later followed this up by saying: “I’m an Elvis fan because it was Elvis who really got me out of Liverpool. If I can pin it on anyone, Elvis probably, you know.”

He also attributed his rock and roll awakening to Heartbreak Hotel. He was quoted: “When I first heard Heartbreak Hotel… me whole life changed from then on. I was just completely shaken by it.”