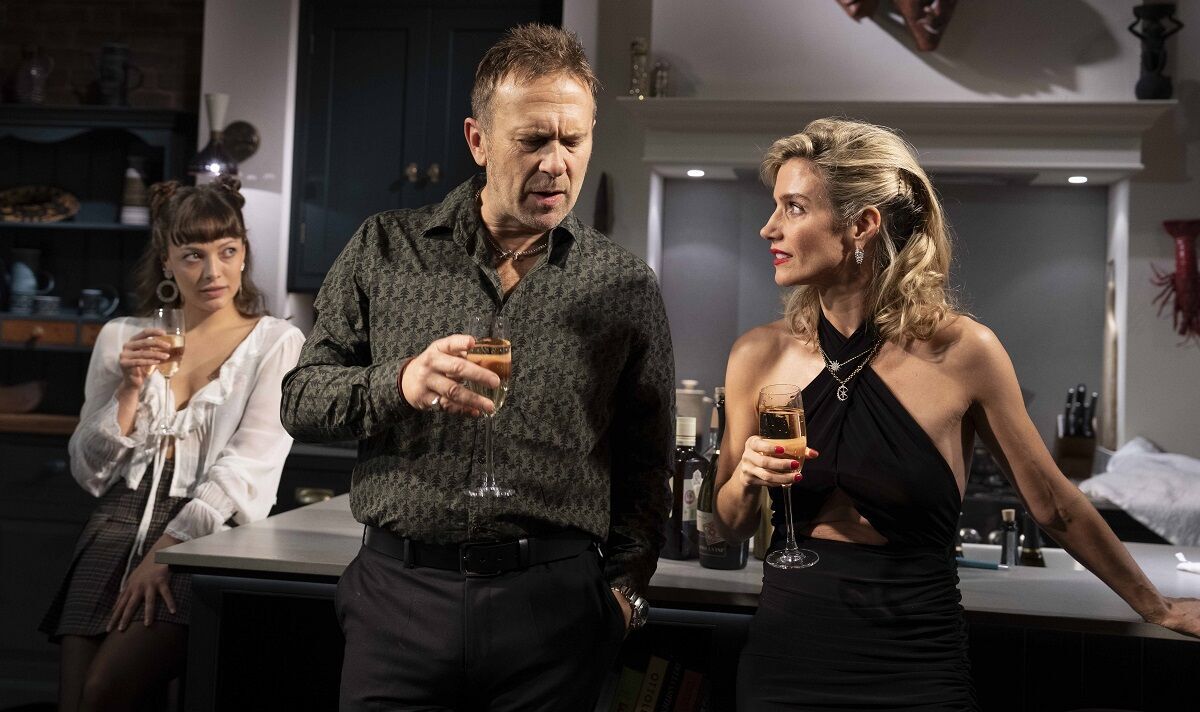 A night of debauchery among affluent couples at first looks like an over-sexed Brian Rix farce until it shifts gear rather abruptly. The change arrives in the alluring shape of the low-voiced Lucy (Pooya Mohseni) whose enigmatic gender identity creates confusion among the assembled company of ‘liberated’ heterosexual adults.

Until this grenade-in-a-frock detonates the proceedings, the guests at Alex (Jason Merrells) and Hetty’s (Molly Osborne) soirée sans vêtements have unburdened themselves of a variety of opinions on hot button topics such as racism (“Why are there no black people at your party?”), pronoun abuse, homophobia and JK Rowling while wandering in and out of Tim Shortall’s marvellously detailed kitchen set for rumpy-pumpy in the living room offstage.

Outrageous Russian Magdalena (Amanda Ryan), wife of wealthy, ageing American Jeff (US movie star Timothy Hutton) is the most voracious of the guests, while uptight Jake (John Hopkins), married to the flirtatious Gilly (thigh-flashing Lisa Dwan), is the most reluctant participant. Johnson’s aims seem unclear until halfway through when boulevard comedy changes to brutalist social satire.

Inspired by the embarrassing party scenes in Alan Ayckbourn’s Absurd Person Singular and the sexual role playing in Pinter’s The Lover, Johnson’s real target is middle class hypocrisy as exemplified by Alex who is more concerned about wine stains on the Persian carpet than wet patches on the sofa.

Although the cultural references are all over the place – Damien Hirst’s shark one minute, Netflix and NowTV! the next – Johnson (who also directs) effectively puts the boot into Attention Deficit Disordered Old Islingtonians who scatter opinions like cheap confetti.

And when the most affecting line is given to the transgendering Lucy (“It’s taken me 38 years to arrive in the world the way I feel I should have made an entrance”), the play’s imperfections fade beneath the assault on shallow, vacuous, consumerist characters whose thrill seeking antics conceal an emotional and intellectual bankruptcy.