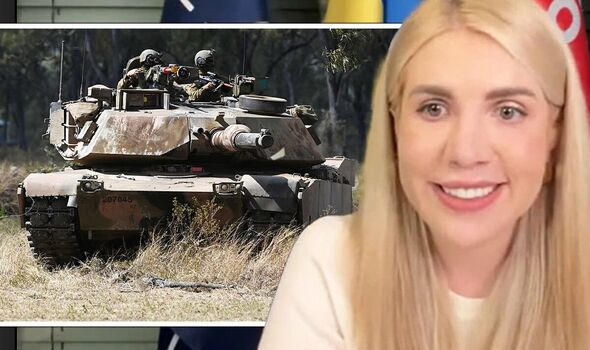 ‘This is a big moment’: Ukrainian MP reveals West could turn tide in war with new tanks

Ukrainian officials, media commentators and civilians across the defending nation erupted into “applause” when US President Biden said the words “Abrams tanks” on Wednesday evening, a leading Ukrainian politician has told Express.co.uk. Kira Rudik, the People’s Deputy of Ukraine, recounted the “super happy” moment when she and hundreds of thousands of other Ukrainians realised their days of “disappointment” over a lack of main battle tank pledges were over. As military analysts uniformly point to the imminence of a “major Russian offensive” in spring, with more than 200,000 newly-mobilised soldiers expected on the frontline, the Ukrainian MP applauded the West for “finally” breaking out of a “reactive” mould, ushering in the next stage of the war, the era of altogether more offensive weapons support.

With bated breath, Ms Rudik, alongside Ukrainian officials and media commentators, was gathered in a TV studio in Kyiv on Wednesday evening (7pm local time), watching the video link from Washington.

Rumours that President Biden was planning to announce the release of a battalion of US main battle tanks to Ukraine, vehicles that could prove “critical to victory”, had been circling through Kyiv since Tuesday morning.

Germany and the US had failed to pledge the tanks during the Ramstein meeting on January 20, which had been earmarked as the day main battle tanks could be promised.

Express.co.uk spoke to Ms Rudik on Monday, prior to the rumours that emerged the following day, when she described the palpable feeling of “disappointment” afflicting Kyiv.

Kira Rudik told Express.co.uk of the reaction in Kyiv to US tank pledges (Image: EXPRESS / GETTY )

At the time, she said: “When soldiers ask me what the reasoning is for the West not to give us the tanks, it is honestly a question I cannot answer. What else needs to happen to us to prove that this is the war for extinction and that we are fighting for our lives?

It is with those thoughts that she and others watched President Biden’s speech on Wednesday evening.

Germany had earlier pledged to send a company of Leopard 2 tanks, but the US announcement was “emotionally bigger” for her and many other Ukrainians because they “knew that if the US makes a decision like this, it means that everybody who looks to the US will follow”.

Russia are planning a “major offensive” in Ukraine during the spring (Image: TELEGRAM )

“When he said those words, ‘Abrams tanks’,” she said, “everybody stood up and started applauding. Now, everybody is super happy.”

Within minutes of President Biden taking to the White House lectern, he announced that the US will send 31 M1 Abrams battle tanks to Ukraine, reversing months of persistent arguments that the tanks were too difficult for Ukrainian troops to operate and maintain.

The US decision came on the heels of Berlin agreeing to send 14 Leopard 2 A6 tanks from its own stocks. Germany had said the Leopards would not be sent unless the US put its Abrams on the table, not wanting to incur Russia‘s wrath without the US similarly committing its own tanks.

President Biden said that in total European allies have agreed to send enough tanks to equip two Ukrainian tank battalions, or a total of 62 tanks since Germany has said it will send another company of their Leopards soon. Britain has also pledged 14 Challenger 2 tanks.

Ms Rudik, admitting that the last few days had been an “emotional rollercoaster”, said on Wednesday evening: “What is so important about today’s announcement is that finally, we see that our Allies have stopped playing second-hand to Russia.”

What she described as the “reactive hand” of the West, whereby packages of support from Kyiv’s backers had come, for the most part, only ever in response to Russian action, was “finally being overcome”.

“We hope that the decision to win the war, not just to exhaust Putin, is finally being made,” she said. “From what we can see, it is now being made.”

After days of uncertainty, difficulty and disappointment, she said Ukraine had had some “good news”.

With a relieved smile on her face, she concluded: “This is a big moment and so many people feel it. For so many of us in my country, the only fuel we have to run on is hope. Today, we were given more of that fuel.”

READ NEXT: Brit volunteers died as they rescued woman in Ukraine
Russia livid as US and Germany send tanks to Ukraine
Ukraine LIVE: Biden confirms US will send Kyiv new batch of tanks
US to send Abrams tanks to Ukraine in U-turn
Zelensky axes ministers in vow to not ‘show weakness’