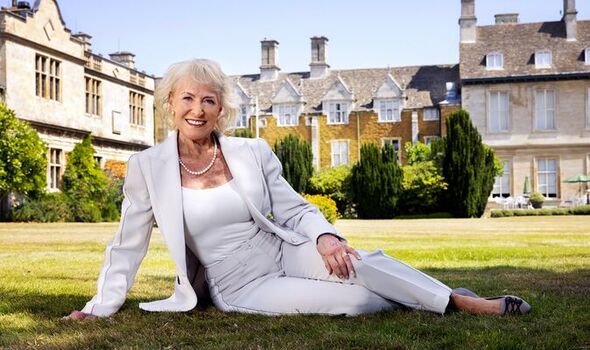 Through Thick And Thin: Chances looked slim, but Rosemary Conley was destined for stardom

It is every parent’s worst nightmare: being told by doctors your sick child is unlikely to reach her 10th birthday. But that’s what mine, Oswald and Celia, were warned after years of poor health saw me confined for months to a children’s hospital. It came as a shock when I found out many years later. But from a very young age, growing up in Leicestershire, I faced severe challenges. As a toddler my eczema was so bad I had to wear pyjamas with socks sewn into the ends of the arms so I couldn’t scratch myself raw. By the time I was two, I developed asthma.

Believing fresh air and travel would help, my grandmother paid for me to go to South Africa with my mother to visit her cousin. During the voyage, we stopped off at Madeira, where I spent my entire £2 holiday money on a beautiful walkie-talkie doll. During our stay in Cape Town, a relative visited with her daughter who admired my doll, so I sold it to her for £2.50. She was delighted and so was I – to get a return on my Rosemary second Mike on Australia, Inset above, weight in her dog investment; an early sign of my entrepreneurial nature.

But my health did not improve and, aged eight, I spent several months in hospital. After the doctor’s grim prognosis, my mother did all she could to help save my life. She even took me to faith healers.

Years later, a leading respiratory specialist explained my lungs were underdeveloped and damaged by whooping cough and pneumonia.

If I hadn’t followed the career path and lifestyle I have, he said, my life today would be a very different story. It seems ironic that such a poorly child transformed into a successful fitness teacher – evidence, I believe, of a divine sense of humour.

School became exhausting and I left a week before my 15th birthday and enrolled in secretarial college. My health improved and for the first time I felt normal. I started dating at 15 and one young man caught my eye at our local church youth club. His name was Phil Conley.All the girls fancied Phil. Our relationship blossomed and at 18 we became engaged.

For some reason I took out a life insurance policy and underwent a medical exam. It would change my life. The doctor did various tests but when he left the room I saw he had written that I was “well covered”. I read those words as “fat”. I had never worried about my weight, but from that moment I became aware of my body size.

Having experienced some ups and downs, including breaking off our engagement, Phil and I married in 1968.

Our first home was an 11th-floor council flat. To save money, we built our own furniture.

The wrote ‘well read it as moment aware body A neighbour introduced me to a new Cordon Bleu part-work magazine and I worked on my culinary skills. The more accomplished I became, the more the pounds began to pile on.

Eventually we moved into our first house in the Leicestershire village of Thurnby. But our earlier break-up had left its scars and I ate for comfort, developing a bad relationship with food.

I binged then starved myself as I struggled to keep my weight under control: sitting at work in my secretarial job with a packet of butter fig rolls and half a pound of butter, scraping the biscuits along the block of butter and eating it.

The bigger I became, the unhappier I was – and the more I comfort-ate. It was a vicious cycle of self-destruction.

I will never forget how unhappy and desperate I felt. That’s why I am so empathetic with people who struggle to lose weight. I joined Weight Watchers weighing 9st.

After several weeks I was only a pound off my goal weight of 8st but over Easter I fell off the rails and regained all the weight I had lost, plus more.

I became increasingly depressed, eating ice cream, cooking chocolate, anything I could lay my hands on. Standing in front of the mirror, I said to myself: “You big fat pig!”

I promised I would stop. But before I knew it, I was downstairs eating my third slice of heavily buttered toast with marmalade! Before long, I reached 10st 7lb and was a size 14, although I was barely 5ft 2in. I loathed myself. I couldn’t see my toes because of my stomach.

The more I tried to lose weight, the more I gained. Then one day a friend’s girlfriend noticed I’d been crying and told me: “You would look so lovely if you lost your weight.” Those words triggered something in me.

So I joined another slimming club called Silhouette, with a diet based on a daily allowance of 1,000 calories. By 6pm I would be hungry, having eaten all my daily calories. Once again, I fell off the wagon and binged.

Finally, in a moment of revelation, I decided to create my own diet – based on a more generous daily allowance of 1,400 calories. Amazingly, and gradually, the weight began to drop.

I stopped snacking, ate three meals a day, and rarely drank alcohol. As a trimmer body began to emerge, so did my confidence and sense of self-worth. I felt liberated. As a result, I started a slimming class of my own and invited a few friends and neighbours around on Monday evenings for a weigh-in. It was wonderful to see their transformation.

DON’T MISS PART TWO: The diet book that made me a star only in tomorrow’s Sunday Express

I had found my vocation. In 1972, I left my secretarial job to devote myself to my Slimming and Good Grooming Club – or SAGG. Later I opened the first SAGG Centre in Leicester and was soon running more than 30 classes a week.

Early in 1975, I began feeling tired and nauseous, and my doctor suggested a pregnancy test. I had lost a fallopian tube some years earlier and Phil and I had accepted never being able to have children.

But when I rang for the result, the receptionist said: “You’re going to have a baby!”

Our beautiful daughter Dawn was perfectly healthy, had a shock of black hair just like her dad and was an adorable baby.

I was a busy working mother and, by 1980, my professional life had begun to grow in all sorts of exciting ways. I did regular radio slots and submitted my successful dieters’ stories to women’s magazines.

This caught the attention of IPC Magazines, who bought my SAGG clubs and wanted me to create a national network. The classes took off and, over time, we launched them all over the country. But as the business grew, Phil and I drifted apart and, in 1982, we decided to separate. While Dawn was still young, I wrote a book about weight loss. Eat Yourself Slim was published in 1983 and sold around 60,000 copies – far more than I expected.

Some months after Phil and I separated, I was introduced to a man called John. He was charming and we dated for a few months but I had a sixth sense that something wasn’t right.

One night working late and alone in my office, youths broke in and stole my purse and keys. I called the police and later John but received a whispered response and no rt. t n assistance or comfort. It wasn’t till later that I found out he was in another relationship.

The final straw was my decision to get a guard dog. I bought an eightweek-old German Shepherd and called her Nikki. John disapproved so, faced with choosing him or the dog, I brought our relationship to a swift end.

Over the spring bank holiday in 1983 I went pony-trekking with friends. Among our group was a stunning guy called Mike. We seemed to click. He was only 23 and I was 36, but neither of us cared.

But while I had found new love, by 1985 a deep economic recession was hitting the slimming classes, which were not proving as profitable as IPC had hoped. We had 600 classes run by around 300 women but IPC decided we would be better off with just 130 classes. I had the job of visiting groups of teachers to pro ho cl abwwcjo gr bre grou break the news. One group was almost ready to lynch me. With all the stress, things began going pear-shaped at home. Mike worked in the shoe trade but wasn’t happy in his job and mine was falling apart.

By Christmas 1985, the clubs were disbanded and I closed down the operation. Mike and I broke off our engagement.

In the new year, unable to stand still, I transferred my personal classes to the Holiday Inn hotel in Leicester. Then suddenly, in late February, I fell ill. I couldn’t stop vomiting and kept passing out.

I called to ask Mike for help and he rushed over and stayed with me until an ambulance came. I was diagnosed with gallstones and the surgeon told me I either have my gallbladder removed or avoid surgery by following a very low-fat diet. I chose the latter.

Through thick and thin (Image: )

While in hospital, I saw an advert for a Christian book called Power For Living, promoted by pop singer Cliff Richard. At this messed-up stage of my life, I felt I needed some divine intervention.

I had been brought up to go to church on Sundays and I attended Sunday school throughout my childhood, but somehow the Church of England’s way of worship back then seemed so ritualistic and impersonal. When the book arrived, I felt it was talking to me in everyday language that I could understand, and suddenly it all made sense.

My life was a disaster: a broken marriage, a closed down business, a failed relationship, no job, ill health and probably needing to sell my house – a total mess.

Back home again, I knelt by my bed and prayed from the book. I went to sleep feeling like a brand-new person? 20 years younger, confident about my future and hugely relieved someone else was now in charge of my life.

Days later, Mike called round unexpectedly and admitted he missed me. I had to admit I had missed him too. Just a few months later, he also became a Christian and we married on July 26, 1986, at Loughborough register office.

Things were changing again for the better. Suddenly, my life was taking off – spiritually, emotionally and financially.