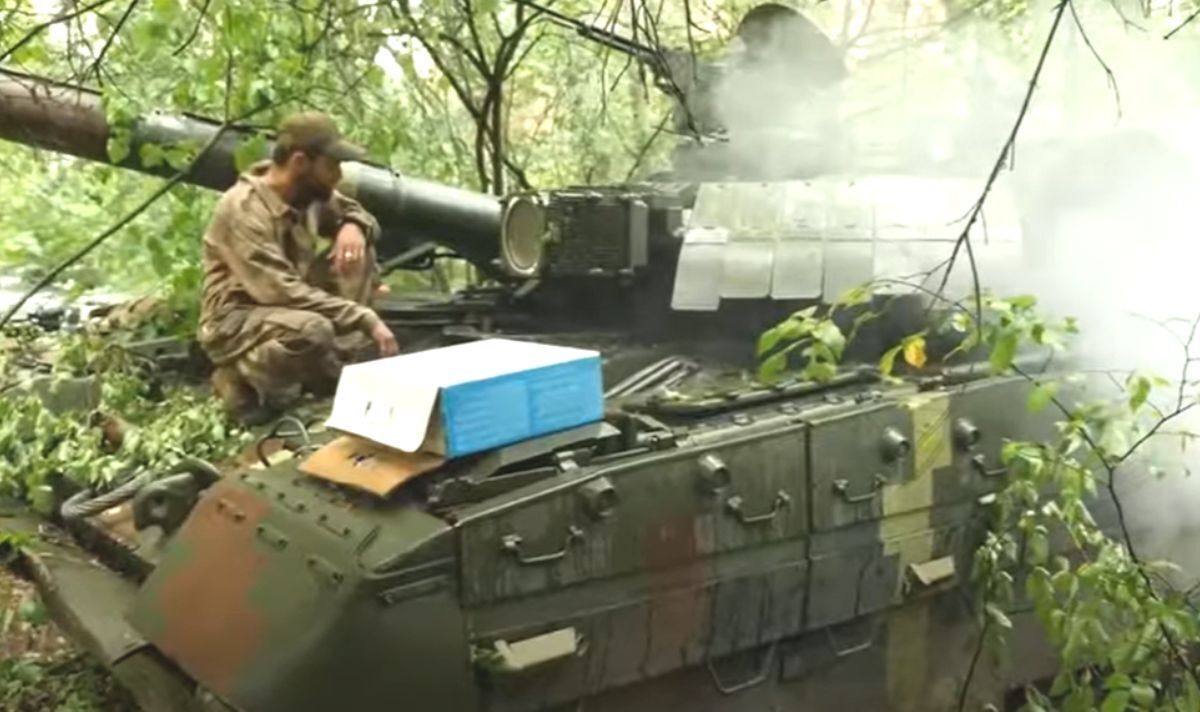 In an undisclosed location, kept secret to protect the soldiers from Russian detection, a handful of Ukrainian soldiers have been repairing T-84 tanks. Their leader, Lieutenant Vitalii Timoshuk is just 21 years old and graduated from Ukraine’s military academic “on the day of” Sky New reporter John Sparks’ visit. Looking after the rare tank, with only six of the 46-tonne assault vehicles available to Ukraine, the small unit has already repelled Russian advances in the conflict region.

Mr Sparks said, in his report: “The head of this secret tank base is a youthful 21 years old and officially graduated from the military academy on the day of our visit.

“But Lieutenant Timoshuk says he believes in his men and the prospect of victory.”

The report later cut to an interview with the young lieutenant, who stood proud in front of the tank, partially obscured by low-hanging branches and greenery.

Lieutenant Timoshuk said: “Our people are experienced and they know why they came here, because of their families and our motherland. This will help us to win.”

When questioned by Mr Sparks about his young age and potential lack of experience, the lieutenant smiled again.

Mr Sparks said: “You’re not that experienced. You’re 21 years old and you are leading the unit.”

Lieutenant Timoshuk responded: “I did not tell them I was 21 for a long time. I don’t look 21. What else can I say?”

Following the interview, Mr Sparks reported that the young lieutenant’s men had said their leader had “already distinguished himself” by successfully “repelling a Russian advance last week”.

Mr Sparks said: “Lieutenant Timoshuk has already distinguished himself, say his men, by repelling a Russian advance last week. Once again, the action was caught on a smartphone.”

READ MORE: When will war in Ukraine end? [INSIGHT]

And President Volodymyr Zelensky predicted Russia would escalate attacks ahead of a summit of European leaders expected to welcome Kyiv’s bid to join the EU.

In his nightly address last night, he said: “Obviously, this week we should expect from Russia an intensification of its hostile activities. We are preparing. We are ready.”

EU leaders at a summit later this week are expected to give their blessing to Ukraine becoming an official candidate to join, a decision that will be marked as a triumph in Kyiv.

Though it would take years for Ukraine to enter the EU, for the bloc to reach deep into the heart of the former Soviet Union would bring about one of Europe’s biggest economic and social transformations since the Cold War.

Ukraine applied to join just four days after Russian President Vladimir Putin ordered his troops across the border in February.