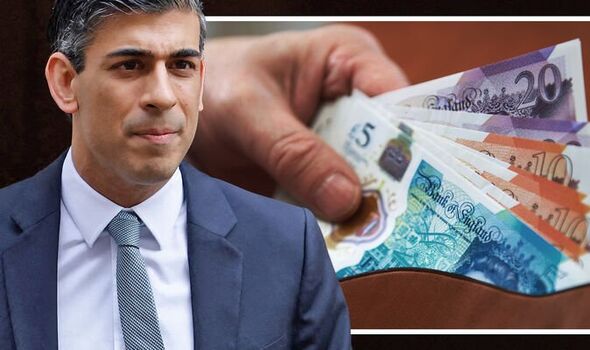 Chancellor Rishi Sunak defended the expected 10 per cent hike and insisted it will not fuel an inflationary spiral.

The Chancellor has come under pressure to not scrap the triple-lock again (Image: Ian Forsyth/Getty)

But critics said the move is “ludicrous” and “crazy” when wages are lagging well behind the cost of living and the government is calling for pay restraint.

Silver Voices director Dennis Reed warned he feared the row is pitting workers against pensioners and will lead to pressure for the triple lock to be suspended again.

He said claims pensioners are in line for an extra £1,000 were wide of the mark as millions of older claimants are still on the old lower paid system, which would mean a 10 per cent hike equated to an extra £14 a week.

Mr Reed said: “If the triple lock is dropped again, hell will have no fury like the wrath of older people.

He warned the row about pension increases at a time of pay restraint gives the government a “ready-made excuse” to drop the increase nearer the time.

Mr Reed warned the anger directed at the government last year when the triple lock was suspended was “minor” compared to the “major attack” it will face if it did it again.

The formula means pensions rise by the highest of inflation, pay growth or 2.5 per cent

It was suspended ahead of this year’s increase after the pandemic skewed the figures.

Next April’s pension increase will be determined by the rate of inflation in September, which is currently expected to be around 10 per cent.

It has led to claims it is unfair on younger workers to ask them to endure pay restraint while pensioners are in line for a significant increase.

Downing Street yesterday insisted it would be “reckless” to raise public sector pay in line with inflation.

The Prime Minister’s official spokesman warned against “chasing inflation” that could have a “bigger impact” on take-home pay in the long term.

Mr Sunak argued that state pensions will not have the same impact on inflation.

The Chancellor said the triple lock protects pensioners “because they are among the most vulnerable in our society”.

He added: “It’s right that we reward our hard-working public sector workers with a pay rise, but that needs to be proportionate and balanced with the need not to make the inflationary pressures worse and also to see what’s affordable for the taxpayer.

“The slight difference with pensions is that pensions are not input costs into the cost of producing goods and services that we all consume, so they don’t add to inflation in the same way.”

Former Treasury minister Lord O’Neill, who served under David Cameron and Theresa May, hit out at the plans to restore the triple lock.

Lord O’Neill is not a fan of restoring the triple-lock (Image: Wikipedia)

He said: “Given the pressure on fiscal policy and the inequality issues for the past decade and beyond, the constant protection of pensioners seems ludicrous in itself and in these circumstances particularly crazy.”

He said: “It is difficult to call for wage restraint among the working age population while pensioners receive a big increase.

“It may be difficult politically to renege on the triple lock again, but we should bear in mind that pensioners as a group are less likely to be in poverty than, say, families with young children.

“Support for struggling households could be better targeted than giving all pensioners, many of whom are relatively well-off, a big increase.”

Older pensioners often face much higher heating costs than workers out of the home for most of the day.

“We are conscious that energy bills are rising and we don’t want any pensioner to be in the situation where they are worried about paying their heating bill.”

Lord Foulkes, Co-Chair of the All-Party Parliamentary Group for Older People, said: “There are some mischief makers who are trying to start an inter-generational fight between poor pensioners and poor families.

“This must be resisted as both groups are struggling to make ends meet while the rich are getting richer by the day.

“Older people have already lost out with no triple lock this year and must not be made to fall further behind into misery and even destitution in the worst cases.

“It is also nonsense to try to argue it will fuel inflation as they need the increase urgently to help pay for food and fuel to keep warm and survive and will still be buying the cheapest available own brands where possible.”

Caroline Abrahams, charity director at Age UK, said: “Millions of older people, like many others across the UK, are facing a huge financial struggle at the moment, unable to pay their basic bills and dreading what looks set to be a very tough winter ahead.

“With prices rising at their fastest rate in 40 years – on top of the suspension of the triple lock last year – it’s more important than ever that the State Pension is increased in line with inflation next year.

“For many older people living on low fixed incomes, relying solely on their State Pension and benefits, there are simply no more cuts to make – without the safety net of the triple lock, millions of vulnerable older people could fall into deep hardship from which they may never recover.”

Deputy Prime Minister Dominic Raab said pensioners were “particularly vulnerable and they are disproportionately affected” by the increase in energy costs.