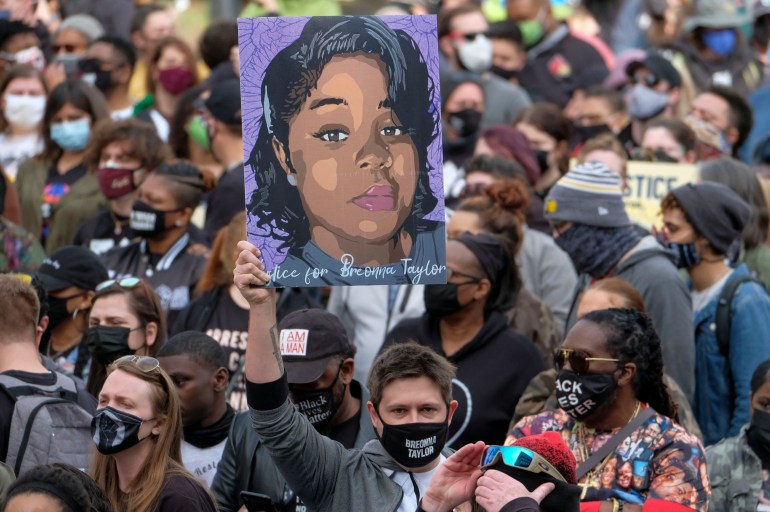 US charges four police officers in killing of Breonna Taylor

Federal prosecutors have charged four current and former police officers in Louisville, Kentucky for their roles in the 2020 fatal shooting of Breonna Taylor, a Black woman who was shot in her home in a case that rocked the United States.

Three of the officers, Kyle Meany, Joshua Jaynes and Kelly Goodlett were charged with knowingly using false information to obtain the search warrant that authorised the search of Taylor’s home that led to the botched raid that killed her, US Attorney General Merrick Garland announced in a news conference on Thursday.

“Breonna Taylor should be alive today,” he said.

Federal prosecutors said that Louisville police officers, including Meany and Jaynes, knowingly used false information in an affidavit used to obtain the search warrant that authorised the search of Taylor’s home that led to her shooting.

“We allege that the defendants knew their actions and falsifying the affidavit could create a dangerous situation, and we allege these unlawful acts resulted in Ms Taylor’s death,” Garland said.

Taylor was shot by police who used a “no-knock” warrant for a nighttime raid on her home, surprising her and her boyfriend Kenneth Walker, who were in bed. Walker fired a single shot at what he thought were intruders. He hit one officer in the leg. The police opened fire, hitting Taylor eight times. She bled to death on the floor of her apartment.

The 26-year-old emergency medical technician was unarmed. Her death, along with the murder of George Floyd by a policeman who knelt on his neck for more than nine minutes, fuelled a summer of protests against racial injustice and police violence two years ago, when the country was reeling from the still-new coronavirus pandemic.

Tens of thousands of people took to the streets around the world rallying behind the Black Lives Matter movement calling for justice for Floyd, Taylor and other Black Americans killed by the police.

A Kentucky grand jury in September 2020 declined to charge anyone in Taylor’s killing, a decision that sparked anger among protesters in Louisville.

Only one officer, Hankison, was fired in 2020 in connection with the raid, though not in Taylor’s death, for “blindly firing” 10 rounds outside her apartment complex. He was tried and acquitted on felony charges of wanton endangerment.

Jaynes had applied for the warrant to search Taylor’s house. He was fired in January 2021 by former Louisville Police interim chief Yvette Gentry for violating department standards in the preparation of a search warrant execution and for being “untruthful” in the Taylor warrant.

Local activists and members of the Taylor family celebrated the charges and thanked federal officials.

NEWS ALERT: @AttorneyCrump and co-counsel Sam Aguiar and Lonita Baker have released a statement regarding charges filed against several of the officers involved in the killing of Breonna Taylor. pic.twitter.com/vs5XfGOT9K

“Today was a huge step toward justice,” lawyer Benjamin Crump said in a statement.