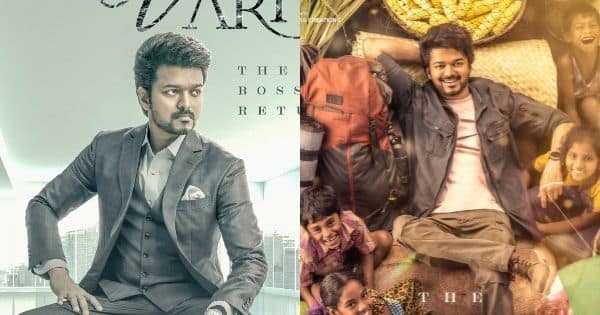 After Beast, the next big release of Thalapathy Vijay, tentatively called Thalapathy 66 earlier, but later revealed to be titled Varisu, is set to release for Pongal 2023. Pushpa actress Rashmika Mandanna has been roped in as the leading lady while Prakash Raj, Prabhudeva and others are on board as key supporting characters. Vamshi Paidipally, who’s previously made his mark in Telugu cinema with hits like Brindavanam, Yevadu, Oopiri and Maharshi, will direct the movie while S Thaman will score the music. Now, the latest we hear is that Thalapathy 66 aka Varisu could see Vijay in yet another double role quick on the heels of Mersal and Bigil. Also Read – Trending Hollywood News Today: Bill Cosby found guilty of sexually assaulting a minor, Amber Heard and Cara Delevingne’s viral kissing picture and more

Varisu to be another dual avatar for Thalapathy Vijay?

Till date, two posters of Varisu are out, with the first one having Thalapathy Vijay as an astute businessman while the second sees him in a happy-go-lucky mood, dressed in a casual, unkempt attire, surrounded by kids. A well-placed source within the industry has exclusively apprised BollywoodLife that it’s likely because the possibility of another Vijay movie, with the actor in a double role is quite high. Add to that the fact that this is his first multiverse film, with another strong possibility of Varisu being tied to one of Joseph Vijay’s earlier family films, and the chances of seeing him in a dual character are even higher, adds our source. Also Read – Trending TV News Today: Karan Kundrra takes auto ride, Shehnaaz Gill hides her face from paparazzi, Aneri Vajani opens up on dating and more

The BOSS Returns as #Varisu#VarisuFirstLook#HBDDearThalapathyVijay

Let us all come together to celebrate #Varisu for Pongal 2023.#VarisuSecondLook#Varisu#HBDDearThalapathyVijay

Word is that Thalapathy 66 could follow Kamal Haasan starrer Vikram’s path by becoming Vijay’s first multiverse films. The internet and Thalapathy Vijay fans are buzzing with excitement over the possibility of the the Thalapathy Vijay and Rashmika Mandanna starrer, also featuring Prakash Raj and Prabhudeva in prominent roles, which ties up with previous titles from his filmography, and speculations are now running rife with which Thalapathy Vijay movies will the Vamshi Paidipally directorial tie up with in a multiverse story, just like how Vikram recently did with Kaithi and the 1986 Vikram. Also Read – Don 3: Latest update on Shah Rukh Khan’s film will leave fans heartbroken

Among other news from the movie, Telugu cinema superstar Mahesh Babu is expected to make a smashing cameo in the film, the announcement of which is expected to take place soon after the title is announced.