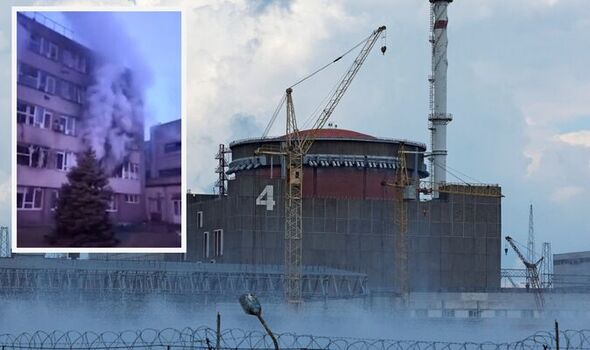 The nuclear power plant,  located on the Dnipro River in southern Ukraine, was taken over by Russian forces in March.

It is the largest of its kind in Europe, with six reactors.

The plant was targeted by shelling on Friday. Russia and Ukraine accused each other of carrying out the attack.

Rafael Mariano Grossi, head of the International Atomic Energy Agency (IAEA), has said in a statement: “I’m extremely concerned by the shelling yesterday at Europe’s largest nuclear power plant, which underlines the very real risk of a nuclear disaster that could threaten public health and the environment in Ukraine and beyond.”

Mr Grossi, who leads the United Nation’s nuclear watchdog, urged all sides in the Ukraine conflict to exercise the “utmost restraint” around the plant.

He said military action jeopardising the safety and security of the Zaporizhzhia plant “is completely unacceptable and must be avoided at all costs”.

The IAEA chief added: “Any military firepower directed at or from the facility would amount to playing with fire, with potentially catastrophic consequences.”

Shells hit a high-voltage power line at the plant, prompting its operators to disconnect a reactor despite no radioactive leak being detected.

Even though the plant was captured by Russian forces in the opening phase of the war, it is still run by its Ukrainian technicians.

Ukraine’s state nuclear power company Energoatom blamed Russia for the damage at the power station but Russia’s defence ministry accused Ukrainian forces of shelling the plant, saying a leak of radiation had been avoided only by luck.

Ukrainian President Volodymyr Zelensky said Russia was responsible and accused it of committing “an open, brazen crime, an act of terror”. He called for sanctions on the entire Russian nuclear industry.

Earlier this week, the UN’s nuclear watchdog appealed for access to the plant, which Washington claims Moscow is using as a battlefield shield. He said the power plant is “completely out of control”.

Those fears were later downplayed by a Western official who said the site is still “functioning effectively”, despite it being “degraded in terms of normal operating levels”.

The plant is about 160 miles (200km) northwest of the Russian-held port of Mariupol in southeast Ukraine.

Further east of the city, Kyiv and Moscow have both claimed small advances. Russian artillery has bombarded towns and villages across a wide area in a now-familiar tactic.

The southern city of Mykolaiv was shelled last night with one person killed, Mayor Oleksandr Senkevych said on Telegram. He said 22 people were injured with 21 private homes and five residential buildings damaged.

The UN’s atomic watchdog announced in June it had lost connection again to its surveillance systems which keep track of nuclear material at the Zaporizhzhia nuclear power plant.

It was the second time during the month. Ukraine’s nuclear power operator said days later it had re-established its connection.

Energoatom said at the time the link had been lost due to the cutting off by “the occupiers” of all Ukrainian mobile operators, including Vodavone, with which the IAEA has a contract for data transmission.

The IAEA said in July the incident underscored the urgent need to dispatch a mission to the plant.

The Ministry of Defence raised concerns regarding the Zaporizhzhia facility on Friday morning.

It said in a statement: “Following five months of occupation, Russia’s intentions regarding the Zaporizhzhia Nuclear Power Plant remain unclear.

“However, the actions they have undertaken at the facility have likely undermined the security and safety of the plant’s normal operations.

“Russian forces are probably operating in the regions adjacent to the power station and have used artillery units based in these areas to target Ukrainian territory on the western bank of the Dnipro river.

“Russian forces have probably used the wider facility area, in particular the adjacent city of Enerhodar, to rest their forces, utilising the protected status of the nuclear power plant to reduce the risk to their equipment and personnel from overnight Ukrainian attacks.”

US Secretary of State Antony Blinken on Monday called Moscow’s actions around the plant “the height of irresponsibility.”

Russia was accused of firing shells dangerously close to the plant in March as its forces took it over in the first weeks of its invasion of Ukraine.

Mr Blinken told reporters, after nuclear nonproliferation talks at the United Nations in New York, that Washington had grown “deeply concerned” Moscow is using the plant as a military base and firing on Ukrainian forces from around it.

He said: “Of course the Ukrainians cannot fire back lest there be a terrible accident involving the nuclear plant.”