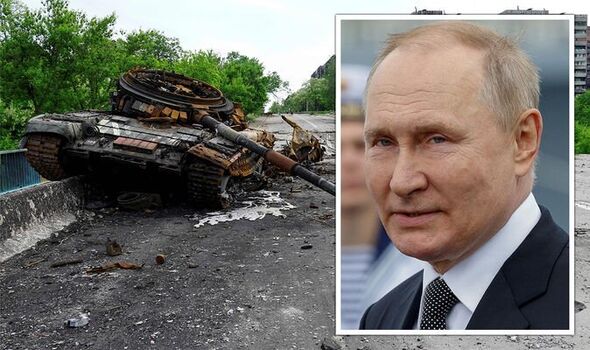 The publication of Yale University research came on the same day Ukraine claimed the number of Russian war dead has now passed 40,000, in what would be a stark illustration of the human cost of Putin’s war. The stark insights are contained in a new paper entitled Business Retreats and Sanctions Are Crippling the Russian Economy, published by the Yale Chief Executive Leadership Institute, and authored by a team of experts including the think tank’s founder, Jeffrey A Sonnenfeld.

The report suggested Russia’s position as a commodities exporter has ”irrevocably deteriorated”, with the country having lost access to its “erstwhile main markets”.

Meanwhile, despite what the authors call “Putin’s delusions of self-sufficiency and import substitution”, Russian domestic production has come to a “complete standstill” with no capacity to replace lost businesses, products and talent.

Vladimir Putin’s Russia is embroiled in a war in Ukraine – and has a struggling economy (Image: GETTY)

The result has been a “hollowing out” of Russia’s production base, causing prices to soar.

The authors added: “Putin is resorting to patently unsustainable, dramatic fiscal and monetary intervention to smooth over these structural economic weaknesses, which has already sent his government budget into deficit for the first time in years and drained his foreign reserves even with high energy prices – and Kremlin finances are in much, much more dire straits than conventionally understood.”

Russian domestic financial markets were the worst performing in the entire world this year despite strict capital controls.

Russia is also largely cut off from international financial markets, limiting its ability to tap into pools of capital required for the revitalisation of its “crippled” economy.

A graphic tweeted by the Ukrainian Ministry of Defence claimed, without providing evidence, that the total number of Russia soldiers killed since February 24 – the day Putin ordered his invasion – stands at 41,350.

Last week during a classified briefing, US Congressmen and women were told Russian losses amounted to 75,000 killed and injured.

Express.co.uk understands such estimates are not shared by independent military analysts, given the basic rule of thumb which suggests for every soldier killed, between three and five more would be wounded.

If the MoD figures were accurate, that would mean overall losses of up to 240,000 – in other words more than the Russian army’s entire deployment.Ukraine said on Thursday it had been forced to cede some territory in the east of the country in the face of a Russian offensive

Ukrainian President Volodymyr Zelensky this week described the pressure his armed forces were under in the Donbas region in eastern Ukraine as “Hell”. He spoke of fierce fighting around the town of Avdiivka and the fortified village of Pisky, where Kyiv has acknowledged its Russian foe’s “partial success” in recent days.

A captured Russian tank on exhibition in Poland (Image: GETTY)

The Ukrainian military said on Thursday Russian forces had mounted at least two assaults on Pisky but that its troops had managed to repel them.

Ukraine has spent the last eight years fortifying defensive positions in Pisky, viewing it as a buffer zone against Russian-backed forces who control the city of Donetsk about six miles to the south east.

General Oleksiy Gromov told a news conference that Ukrainian forces had recaptured two villages around the eastern city of Sloviansk, but had been pushed back to the town of Avdiivka’s outskirts after being forced to abandon a coal mine regarded as a key defensive position