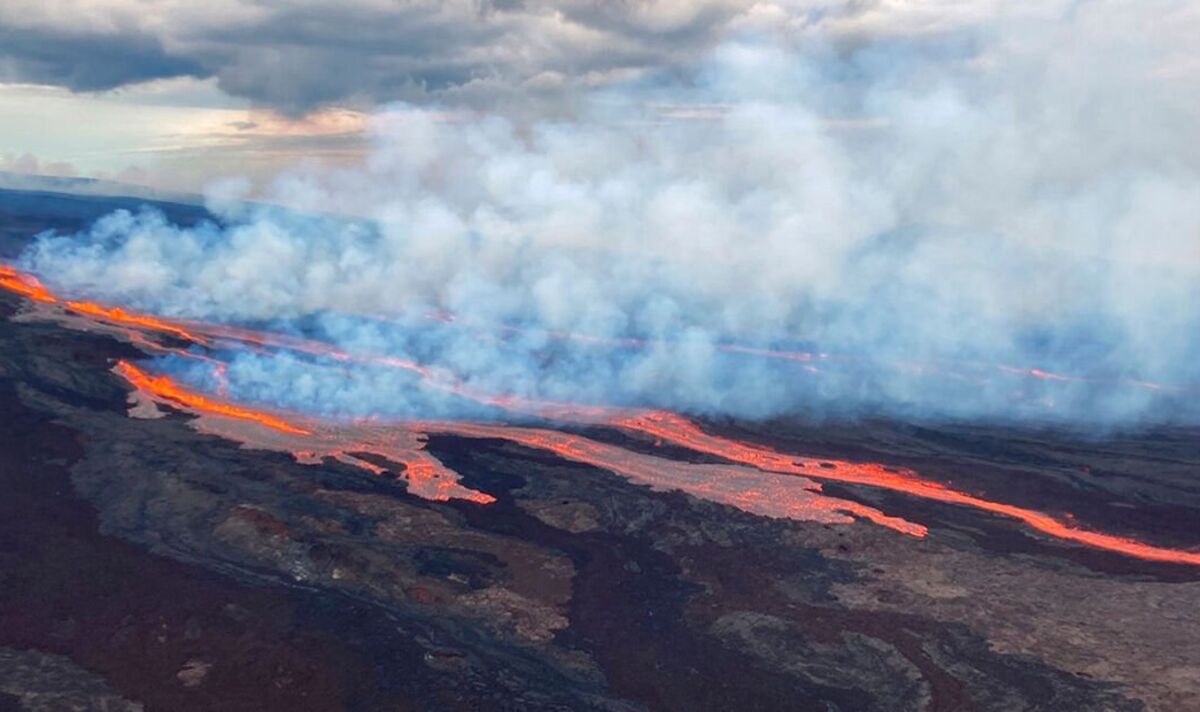 Spectacular time-lapse video footage has shown lava lighting up an area of Hawaii’s erupting Mauna Loa volcano as it moves across it like waves on the ocean. The world’s largest active volcano spewed some ash and lava today with officials warning residents of Hawaii’s Big Island to prepare for a possible larger eruption similar to that of nearby Kilauea, which caused chaos in 2018.

The USGeological Survey (USGS) has warned the island’s 200,000 residents an eruption of Mauna Loa “can be very dynamic, and the location and advance of lava flows can change rapidly”.

The eruption began late Sunday night in the volcano on the Big Island after a series of closely spaced, fairly large earthquakes, said Ken Hon, scientist-in-charge at the Hawaiian Volcanos Observatory (HVO). Magma moved to the surface.

Lava flows are contained within the summit area and are not currently threatening nearby communities – but toxic volcanic gas, know as vog, and possibly fine ash and Pele’s Hair – volcanic glass – may be carried downwind.

Big Island’s population has more than doubled to 200,000 today from 92,000 in 1980 and many newer residents were not living there when Mauna Loa last erupted, 38 years ago.

Most people live in the city of Kailua-Kona, west of the volcano, which has about 23,000 people, and Hilo to the east, with a population of about 45,000.

Officials are chiefly concerned about several subdivisions about 30 miles to the south of the Mauna Loa, which are home to about 5,000 people.

The eruption migrated from the summit to the northeast rift zone, a USGS statement explained. A rift zone is where the mountain is splitting apart and the rock is cracked and relatively weak – making it easier for magma, or molten rock, to emerge.

All indications suggest the eruption will be contained within the northeast hazard zone, the USGS statement added.

An eruption from the northeast rift zone could send lava toward the county seat of Hilo or other towns in East Hawaii. It could take lava weeks or months to reach populated areas on this side of the mountain.

Mr Hon said: “We don’t want to try and second guess the volcano. We have to let it actually show us what it’s going to do and then we inform people of what is happening ASAP.”

Portions of the Big Island were under an ashfall advisory issued by the National Weather Service in Honolulu, which said up to a quarter-inch (0.6 centimetres) of ash could accumulate in some areas.

Mauna Loa is one of five volcanoes that together make up the Big Island of Hawaii, which is the southernmost island in the Hawaiian archipelago.

Mauna Loa, which rises 13,679 feet above sea level, is the much larger neighbour of Kilauea, which destroyed 700 homes in 2018. Some of its slopes are much steeper than Kilauea’s, so lava can flow much faster when it erupts.

During a 1950 eruption, Mauna Loa’s lava traveled 15 miles to the ocean in fewer than three hours.

Tourism is Hawaii’s economic engine but Mr Roth predicted few problems for those on vacation during the eruption.

He said: “It will be spectacular where it is, but the chances of it really interrupting the visitor industry – very, very slim.”