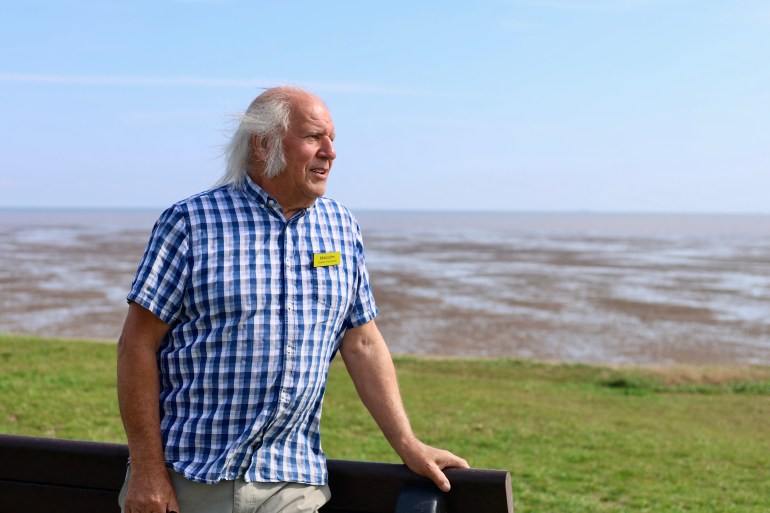 What will be the future of the Thames Estuary settlements?

Malcolm Newell has lived in his sea-view home in Eastchurch, Kent for more than 20 years and dreams of his seven grandchildren taking it on after him. But with the speeding rate of the cliff’s erosion, that may not be the case.

After a sudden landslide in 2020 that caused the neighbouring family of six to lose their home to the sea, Newell’s property is now the next one standing on the cliff and the most exposed to the North Sea’s tides.

Eastchurch was once known for its natural beauty, Newell explains, “At least until we had this happen.”

The holiday-destination village is located on the Isle of Sheppey, a 94sq km (35sq mile) island in the Thames Estuary off the northern coast of Kent, 40km (25 miles) east of central London. It is close enough to the city to become a retirement haven for former Londoners, but not equally protected from rising sea levels and increased flooding risk.

Higher temperatures and sea levels rising as the result of the climate emergency are exacerbating the severity of flooding at a national level, and studies expect flash floods in Britain to consistently increase up to 40 percent by 2100.

About 1.5 million people living along the Thames’s banks are exposed to floods and eroding coasts. Newell’s home is among the five million properties in England at risk of falling into the sea, according to estimates by the Environment Agency (EA), the country’s public body managing flood risk.

Last year, the United Kingdom’s government kicked off a record 5.2 billion pound ($6.2bn) investment in flood and coastal defences in England to better protect 336,000 properties by 2027. Some areas have seen these investments materialise already, like the port of Tilbury, 35km (22 miles) east of London, where a 34 million pound ($41m) scheme was launched to install new dual-function lock gates in the estuary.

However, in the meantime, new homes continue to be built in flood-risk areas as part of the local authorities’ efforts to tackle the housing shortage. In 2021, more than 5,000 new homes were granted planning permission on floodplains in the East of England.

An EA spokesperson told Al Jazeera: “Where development is necessary for such areas and there are no suitable sites available in areas at lower flood risk, it should be made safe and resilient to flooding for its lifetime without increasing flood risk elsewhere.” However, it is left to local authorities, who make the final decision on planning applications, to follow this guidance.

As protecting infrastructure in flood zones and eroding areas becomes increasingly more expensive because of stronger storms and rising seas, it is likely that many of these properties will have to be sacrificed and communities relocated inland, as EA’s Chair Emma Howard Boyd pointed out earlier this year. No forms of compensation have been mentioned for those who will have to move elsewhere.

Newell, who has been asked by the local council to leave his house several times and whose insurer stopped subsidising his property, has made this his fight. “The Environment Agency is supposed to be looking after our coast, but they aren’t doing anything,” he said.

In 2020, Newell was forced to evacuate from his house after the cliff collapse. Despite local authorities providing him with temporary accommodation for three months, he preferred to stay in a caravan offered by the local holiday park’s owner.

Along the Thames, about 275 billion pounds ($333bn) of capital is in danger, including 400 schools, 100 stations, 16 hospitals, four World Heritage sites and hundreds of kilometres of roads and railways.

Ivan Haigh, professor of coastal oceanography at the University of Southampton, said that for such a low-lying, vulnerable area, there is a lot of ageing infrastructure. The Thames Barrier itself, a 520 metre-wide retractable barrier system designed to prevent the floodplain of most of Greater London, is more than 40 years old.

In 2012, his team of researchers partnered up with the EA to develop the Thames Estuary 2100 (TE2100) plan. “[It’s] the first to apply an adaptive approach and operate as one complete system,” Haigh said in a phone interview.

The TE2100 is adaptable to different rates of sea-level rise and changes affecting the estuary, where water ​​could rise by as much as 1.15m by 2100 under the higher climate-change scenario. This approach advances the shift from traditional flood control to flood resilience.

Thanks to its long-term horizon, estuary-wide approach, and emphasis on floodplain management, the plan was quickly recognised as a leading example of climate change adaptation for global cities from Singapore to New York implementing similar models.

“But in order for that plan to be effective, it’s really important that the Environment Agency monitors it regularly,” Haigh explained. The TE2100 is reviewed every five years, and from the latest monitoring of tide records, one finding was clear: “Without any doubt whatsoever, the rate [of seas rising] is getting faster and faster and faster.”

The combination of this phenomenon with aggressive human intervention, such as bigger commercial ships sailing the river and new developments in low-lying areas, is resulting in the actual tidal range getting bigger, too.

Haigh expects much more frequent closures of the Thames Barrier. “But the more it closes, the more maintenance we have to do,” he said. “Just like the more you drive your car. A taxi driver would have to service a car four or five times a year.”

There have been 206 flood defence closures since the Thames Barrier became operational in 1982, following the infamous catastrophic North Sea Flood in 1953 that caused about 2,400 fatalities in the country.

In 2013-14, the barrier was closed 50 times to protect the city from high tides and storm surges, which started to compromise the infrastructure’s maintenance – an operation amounting to around 6 million pounds ($7.3m) per year and involving 80 staff.

“Once we start to close it too many times a year, we won’t have enough time to do the maintenance needed,” Haigh commented.

The case of Eastchurch, where more than 3,000 people live, is more complex than other areas exposed to the Thames’s waters, as its actual eroding process is unique in Europe and deemed of scientific interest. Since 1998, the cliff has been designated a Site of Special Scientific Interest (SSSI) by Natural England, a government department, and therefore excluded from coastal protection interventions.

Gordon Henderson, a local member of parliament for the Sittingbourne and Sheppey constituency, expressed frustration at the ruling. “Whilst many local people would like to see the erosion stopped, government agencies oppose any plans to do that,” he told Al Jazeera.

“The only way would be to remove the SSSI status from those cliffs, at which time proposals that we put forward could be granted permission,” Henderson added. “But in previous correspondence, Natural England said they are not at this moment in a position to remove the national category. So it’s a bit of a catch-22.”

A Natural England spokesperson responded: “We recognise the impact that coastal erosion has had on householders at Eastchurch and sympathise with those affected.” The nearby Swale Borough Council “has overall responsibility for managing this section of coastline”, the spokesperson added.

For his part, Peter MacDonald, councillor at Swale Borough, said he does not believe getting rid of the SSSI category is a necessity to protect the area. “What we need are new groynes and to grow vegetation,” he explained.

Reforestation is at the core of the 30,000 pound ($36,360) plan that MacDonald proposed to his council a few years ago, both to preserve the island’s cliffs and favour biodiversity regeneration.

This approach has already been tested widely, especially using tropical plants such as mangroves, and proved successful in reducing erosion on slopes.

According to coastal resilience expert Lucienne Noel, a senior associate at disaster-risk reduction firm Miyamoto International, “vegetation like vetiver or trees tend to hold the soil in place, whereas bare soil is exposed to rain and wind and can very easily wash away”.

“Many of these ‘hard infrastructures’ are built using current climate data, but sea level rise and flooding continues to get worse, and sometimes the infrastructure was not built to handle these increasing hazards,” explained Noel.

‘Fighting for our values’

MacDonald inherited the passion for coastal engineering from his father and shared it with his late wife Loreley, taking part in the decades-long local activism for the renewal of failing sea defences. “The island has always been a very good place for community, if someone has a problem, most people are going to try to help,” he said.

Newell agreed. “We’re actually committed here. And we want to remain living here. So we fight for our values. Why should we give them up?”

The 73-year-old Eastchurch resident founded the Eastchurch Gap Erosion and Community Action Group back in 2015 to campaign for government action to preserve the area’s shoreline and grant social justice to the local people. “We could lose our homes if we don’t do something about it,” Newell said.

The community even launched a crowdfunding campaign to support the family that lost their home during the cliff collapse in 2020. Leading the initiative with Newell was his granddaughter Sky Newell, 23, one of the island’s youngest activists.

“That’s the best thing about a community, isn’t it?” she said. “When everyone is involved and the oldies and all the young ones get together.”

Now, they are working on putting pressure on the council to implement the revegetation plan proposed by MacDonald. They are also raising more funds to install new groynes that would trap sediment and reduce the loss of material along the shore caused by waves in an attempt to protect what used to be their holiday beach.

“We used to park at grandpa’s house and walk around the cliff, but that land is gone now,” Sky Newell explained.

“This is his home and I want him to live here for as long as [he is alive]. Nanny had her time here and she loved it too. I don’t think anyone should take that from him. So now we’ve got to preserve the coast.”

This story was produced with the support of the Internews Earth Journalism Network.