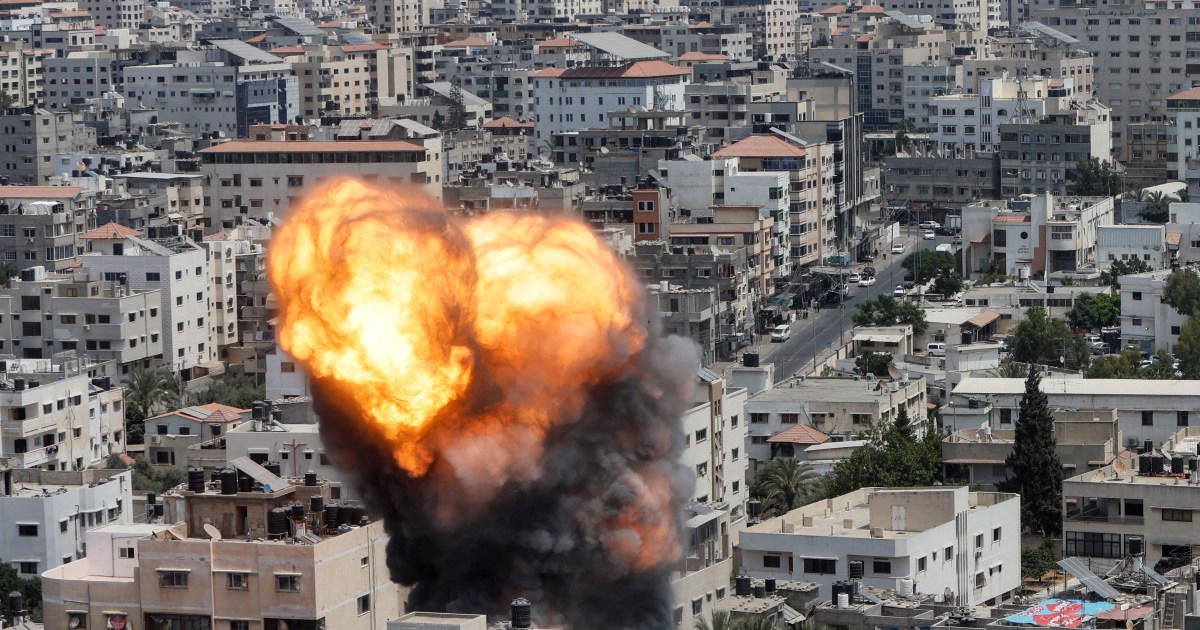 When will the settler colonial siege of the Gaza Strip end?

With few exceptions, mainstream media across Europe and North America is once again framing the latest attack on the Gaza Strip through the prism of “borders,” “Israeli self-defence,” “precision strikes,” and “Palestinian terrorism” or what seems to mean the same thing for Euro-American audiences – “Palestinian militancy”. It is as if the Palestinians have agreed on these so-called borders that separate Israel from the Gaza Strip, and from their side of the border, plot to terrorise Israel for the sake of terror and destruction, driven as they are by “Islamist” ideologies that are inherently anti-Semitic, violent, and barbarous.

This drivel is everywhere, and though it appears in different forms and tones, you can find it across the political spectrum. Its pervasiveness across political affiliations and ideologies suggests that this discourse constitutes a larger worldview – a set of ideas and concepts that a large number of people use to make sense of the world.

Unfortunately, worldviews that are completely divorced from reality can and do gain prominence and the status of “factual knowledge”. This is not an accidental occurrence. Rather, such worldviews come to occupy positions of prominence precisely because they serve existing power relations that not only benefit from the concealment of reality but must necessarily and actively conceal their brutal reality in order to maintain and expand their power.

By Israeli settler colonial design, this worldview works to render the Gaza Strip as an exceptional space, inhabited by people who do not qualify as human. The Palestinians who inhabit this space become beasts whose very nature is to attack Israel for the sole purpose of destruction, violence, and terror. Thus, Israel can do whatever it pleases to these beasts. Against the terror of the beast, Israel is seen as justified in exploding into righteous anger and even beastliness.

This can be observed in several ways, but one way that stands out is in a seemingly benign form of reporting on the Israeli killing of Palestinians in this latest onslaught.

Just notice below how three prominent news organisations frame the killing of Palestinians. What is remarkable is how these three independent major organisations use the exact same framing. As soon as they mention the brutal killing of five-year-old Alaa Qaddoum, it is followed by Israel’s claim that it also killed “militants” in this operation. It is almost as if they know the reader will be heartbroken and maybe even shaken by the killing of a five-year-old innocent girl, and therefore, the report must immediately remind the reader that Palestinians are militants who deserve to be assassinated. The message being that Israel’s beastliness is understandable given that it is dealing with beasts.

This is the BBC:

“Four [Palestinian Islamic Jihad] militants – including Tayseer Jabari – and a five-year-old girl were among those killed since the strikes started, local health officials say. They say another 55 people were injured. An Israeli military spokesman said the IDF was ‘assuming about 15’ militants had been killed.”

CNN with the same framing:

“The Palestinian health ministry said at least 10 people were killed, including a 5-year-old girl and a 23-year-old woman. Another 75 were injured, it said. Israel insists most of those killed were militants.”

The CBC, always the most eager because the most meagre of the bunch, went further:

“The Palestinian Health Ministry said a five-year-old girl and a 23-year-old woman were among those killed and that another 55 people were wounded. It did not differentiate between civilians and militants. The Israeli military said early estimates were that around 15 fighters were killed.”

Yes, the Palestinian Health Ministry should have clarified for the CBC that the five-year-old girl was a civilian and not a militant. And yes, of course, it is obviously the case that the first question a health professional should ask an injured person and the family of the killed person is whether or not they identify as “militants” in accordance with how Israel and Canada understand the term.

In the three reports, the account of the killings is framed within and through the figure of the “Palestinian militant” which is essentially the figure of the beast. The five-year-old girl in these accounts has no name, and neither do any of the other people killed, except for the main militant – Taysir al-Jabari – the scariest of the beasts whose supposed beastliness comes to mark all of the killed in this reporting. That is the core and effect of this framing, which all three organisations must have accidentally come to share. I’m sure this accidental sharing has nothing to do with their respective countries’ staunch imperial support for Israel.

Compare this “reporting” with Al Jazeera’s reporting which, and I realise this is radical idea, views Palestinians as humans:

“The health ministry in Gaza said at least 10 people were killed including al-Jabari and a five-year-old girl. At least 55 people were wounded and being treated at hospitals as a result of the Israeli raids. The five-year-old girl, Alaa Qaddoum, was killed in a missile attack along with her father while they rode a motorcycle to go shopping for groceries. ‘Her mother Rasha is in great shock. She lost her daughter and her husband in a blink of an eye and left behind three children. We are all shocked. What is the fault of an innocent five-year-old girl to be killed in this way?’ family member Mohammad Abu Jabal told Al Jazeera.”

I want to present this contrast here to show the reader the difference between a worldview that posits Palestinians as beasts and one that views them as they are – human. Alaa’s precious life, her father’s precious life, the precious lives of those left behind, are worth more than all of the accolades, bloated salaries, and statuses of all these so-called journalists at these so-called prestigious organisations.

Against the Euro-American discourse that reveals nothing about reality is the reality of total Israeli control and forceful enactment of settler colonial sovereignty over the entirety of the historic land of Palestine, and that includes the Gaza Strip.

As Palestinian scholar Tareq Baconi argued last year, the Gaza Strip is not exceptional and it does not fall outside the framework of Israeli settler colonialism because of the so-called disengagement plan that then Israeli Prime Minister Ariel Sharon began in 2005. Rather, Baconi states “the Gaza Strip is the outcome of processes of land consolidation and demographic isolation that began in what is now Israel and continue apace in the rest of historic Palestine.”

What Baconi is pointing out is that because Israel, like all settler colonial states, must expel the Indigenous people (in this case, Palestinians) and replace them with settlers (Jewish Israelis), land and demography become paramount in all Israeli policies, violence, plans, and actions, and that includes Israeli plans for the Gaza Strip.

What Israel has done is basically force a Palestinian population that is largely made up of displaced Palestinians from the 1948 settler colonial conquest of Palestine into a very small area of land. In reality, the siege is not of people who are from the Gaza Strip, but rather of people who belong to destroyed and eliminated villages and towns from across all of Palestine and are now imprisoned within a besieged small space.

In other words, by preventing the expelled Palestinians from returning to their lands, the besiegement of these Palestinians within the Gaza Strip is part and parcel of the Israeli effort to secure and cement its ever-expansive conquest of Palestine.

This is no ordinary modern siege that ends with a negotiated settlement that benefits the powerful once the besieged are weakened to a degree where they can no longer militarily resist.

Rather this is a siege whose end goal is, not just the weakening, but the eradication of all Palestinian resistance – the resistance that seeks the decolonial liberation of the entirety of Palestine for all Palestinians. And since this is an impossibility, since this form of Palestinian resistance has not abated for more than 100 years and will go on for another 100 years and more if needed, this means that the Israeli siege of the Gaza Strip will not end. By its very structure and purpose, this siege cannot end because its purpose is the eradication of something that cannot be eradicated: Palestinians as a sovereign people who declare their belonging to their Palestinian homeland.

It is within this context that we can properly understand these military onslaughts. They are brutal acts of violence that are designed to shatter and eliminate Palestinian “sumud” (steadfast perseverance). They are basically Israel’s way of constantly reaffirming for the Palestinians inside and outside the Gaza Strip that Israel has the first and last word on the life and death of Palestinians – that Israel is the lord and master of the land. This overwhelming force is meant to break the spirit and will of the Palestinian people and eradicate all their hopes for return and liberation.

I am not completely discounting analyses of some of the immediate causes that can explain why Israel launched this attack at this moment (for example, the upcoming Israeli elections, Biden’s recent visit that reassured complete and total American support, etc). But these immediate causes are themselves caused and explained by a more foundational structure, which is a settler colonial conquest that demands the elimination of indigenous Palestinians and their sovereignty.

Israelis, too, can attain this form of sovereignty. But that can only happen with a complete and foundational transformation of Israel, away from the Zionist settler colonial project.

The sooner that Israel and its allies realise this basic fact, the sooner we can begin to move beyond the brutal propagation of Israeli settler colonial violence and build a decolonial alternative.

The views expressed in this article are the author’s own and do not necessarily reflect Al Jazeera’s editorial stance.