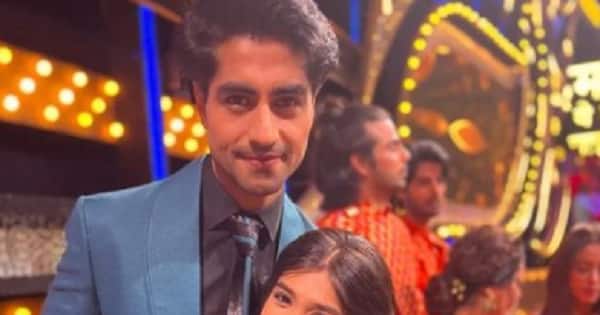 Yeh Rishta Kya Kehlata Hai fame Pranali Rathod who plays the role of Akshara showed her filmy side by turning into Kajol’s most popular character from Kuch Kuch Hota Hai and no prize for guessing it’s Anjali. Pranali looked adorably cute in Anjali attire and did the most iconic scene from her film sans Harshad Chopda. While this hottie joined her and he Naagin fame Arjun Bijlani. The actor looked uber cool as Shah Rukh Khan and they made a perfect pair as they performed this popular scene from Karan Johar’s directorial debut. Also Read – Trending TV News Today: Chahat Khanna-Urfi Javed’s NASTY fight, Aishwarya Sharma recreates Tejasswi Prakash’s Naagin 6 dialogue, Nakkul Mehta in Bigg Boss 16 and more

Arjun Bijlani took to his Instagram and shared the reel along with the caption that reads, ” She is jhokha hawa ka !!! Too cute #bollywoodspecial #ravivaarwithstarparivaar #kuchkuchhotahai #reelkarofeelkaro #trends”. The couple were seen on the sets of Ravivaar with Star Parivaar that is hosted by Arjun and he is one of the most popular and love hosts on Indian television. However, the fans are missing Harshad Chopda in this video and want the Yeh Rishta Kya Kehlata Hai couple to showcase their off screen chemistry too. Also Read – Urfi Javed gets NASTY over Chahatt Khanna’s ‘cheap’ fashion remark; calls her a ‘bully’, ‘hypocrite’ and says she ‘lives off two ex-husbands’ alimony’

Currently, Pranali and Harshad are the most popular onscreen couple on television and in the race of Anuj Kapadia and Anupamaa likes. The TRP of their show Yeh Rishta Kya Kehlata Hai tops the chart and all thanks to their chemistry on the show. Within a very short period, the couple have managed to win the viewers heart and their fans do not miss their single episode and this is a big achievement for them as actors. Earlier there was a huge debate if Hina Khan– the OG Akshara will quit the show and it might lose the fanbase, however, Pranali has managed to be the perfect Akshara and slowly she is turning into a TV queen.